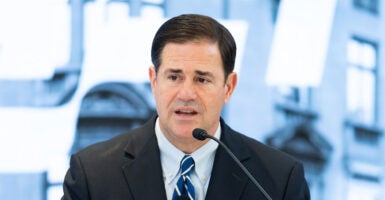 Ducey signed a bill into law banning gender-reassignment surgeries for minors, which makes exceptions for children born with sex disorders or other medically verifiable issues.

The legislation specifies a long list of surgeries doctors cannot perform on children, including mastectomies, breast augmentation, and surgeries in which doctors reconstruct genitalia to resemble that of the opposite sex.

“This is a decision that will dramatically affect the rest of an individual’s life, including the ability of that individual to become a biological parent later in life,” Ducey explained in a letter to Arizona’s secretary of state.

Today, I signed S.B. 1138 and S.B. 1165, legislation to protect participation and fairness for female athletes, and to ensure that individuals undergoing irreversible gender reassignment surgery are of adult age. 1/ https://t.co/BgB0lEU9Um

In anticipation of the Supreme Court’s decision in Dobbs v. Jackson Women’s Health Organization, which could overturn Roe v. Wade, Ducey signed a bill banning most abortions after 15 weeks except in cases of medical emergencies. The bill mimics the Mississippi law at the center of the Dobbs case.

“The bill prohibits a physician from performing an abortion past 15 weeks gestation, except in a medical emergency,” Ducey wrote on twitter. “Many states are taking similar action to protect life. We hope that the U.S. Supreme Court will uphold a similar Mississippi law in the coming weeks.”

He also signed legislation that bars males from girls sports teams and protects schools from complaints and investigations for maintaining sex-segregated teams. The law applies to K-12 schools and higher education.

The Biden administration’s Department of Education is expected to finalize updates to Title IX regulations in the coming weeks that would endanger the law and similar efforts in other states by banning discrimination on the basis of gender identity, The Washington Post reported.

“Girls deserve to compete on a level playing field,” Emilie Kao, senior counsel for Alliance Defending Freedom, said in a statement. “When the law ignores biological differences, women and girls bear the brunt of the harm.”

Ducey pointed out in his letter that transgender children can still participate in sports under the legislation, but are required to play according to their biological sex.

“This legislation is commonsense and narrowly-targeted to address these two specific issues—while ensuring that transgender individuals continue to receive the same dignity, respect, and kindness as  every individual in our society,” Ducey said in the letter.