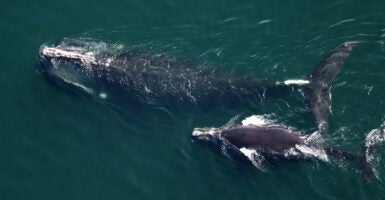 A mother North Atlantic right whale and her calf swim off the shores of Duxbury Beach, Massachusetts, in May 2015. The critically endangered animals are making a comeback since they were nearly hunted to extinction a century ago, but Green New Deal wind turbines could again endanger them. (Photo: David Ryan/The Boston Globe/Getty Images)

Why are they called “right whales”?

That’s a question one sailor asks in Patrick O’Brian’s seafaring “Master and Commander” series of novels.

“Why, because they are right in every respect,” responded his companion, a 19th-century whaler. “ … they have the right whalebone, the best in the market—and the right oil, six or seven tons of it. And the right temperament: They move slow, not dashing about like your fin whale … . You cannot say fairer.”

It’s little wonder that humankind hunted this whale nearly to extinction in ages past. Yet the threats from humanity continue, and now we must protect them. The Biden administration’s Vineyard Wind Project planned in the North Atlantic right whale’s habitat and migration paths is merely the latest threat.

Where’s People for the Ethical Treatment of Animals (PETA)? It’s all for saving the whales, but it says the best way to do that is for people to stop eating fish. It seems to have nothing to say about offshore wind farms.

Members of Congress seem to agree the species must be preserved. (It’s been estimated there are currently fewer than 350 remaining in the world.)

Democratic Sens. Cory Booker of New Jersey, Richard Blumenthal of Connecticut, Tom Carper of Delaware, and Sheldon Whitehouse of Rhode Island introduced a bill, the Right Whale Coexistence Act, to defend the right whale. One component of the bill would direct the secretary of the Department of Commerce to prioritize projects that would “have the greatest likelihood of reducing whale deaths and injuries.”

The very purpose of the act is to “assist in the conservation of the North Atlantic right whale,” noting that preserving the species “will require a joint commitment and effort from government entities, local communities, marine scientists and conservationists, etc.”

The problem is that President Joe Biden’s Green New Deal includes the installation of thousands of square miles of offshore wind turbines. That includes the first major wind farm, the Vineyard Wind Project, a $2 billion farm that would disrupt the right whale’s habitat off the shores of those senators’ own states.

The regulators of the project granted an approval for “incidental take” (harassment) of 10 right whales (out of a total approximate worldwide population of 350, remember) during construction alone. Furthermore, the Vineyard Wind website indicates that the company will conduct construction activities only during the seasons that the right whales do not inhabit the area. But new information shows that the whales are present in the area every month of the year.

A 2021 National Oceanic and Atmospheric Administration study found that the Vineyard Wind area is used by 30% of the known reproductive females worldwide and that, consequently, “the use of the area by reproductive females is an important consideration for the species’ conservation.”

Furthermore, the very existence of the turbines will prove stressful on the marine mammals. Vineyard Wind plans to use turbines up to 14 megawatts in size, which could potentially make the entire area uninhabitable for the right whales and other marine mammals in the region (as determined by the NOAA’s own criteria for behavior disruption attributable to continuous noise). And their ability to communicate among themselves will also become inhibited by the background noise of the turbines.

The whale-threatening Vineyard Wind Project was approved in 2017. It’s only now that Democrats have remembered their old “Save the Whales” bumper stickers. But instead of eliminating the clear and present danger posed by the planned offshore wind farms, they want to spend money on other projects—which will never outweigh the damage being done by the turbines and construction activities.

Now is the right time to save the right whales from the Vineyard Wind Project—not when Congress belatedly recalls that endangered species (particularly those endangered by our own activities) are worth protecting from future human harms.