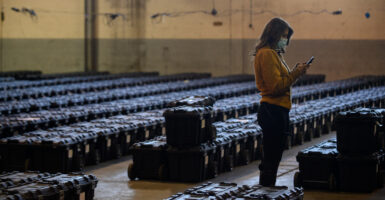 At least 255,000 excess votes were cast in the 2020 presidential election across six battleground states, according to a new study that examined individual voting precincts.

Economist John Lott, president of the Crime Research Prevention Center, is the author of the peer-reviewed study, which looked at precincts in Arizona, Georgia, Michigan, Nevada, Pennsylvania, and Wisconsin.

The study, set to be published in the academic journal Public Choice, compares precincts where there were allegations of voter fraud to similar precincts in neighboring counties that had no fraud allegations. In each comparison, the two precincts examined fall on opposite sides of a county line—in some cases across the street.

“Precincts are generally small, homogeneous areas, and when two areas are adjacent and similar to each other, why would one precinct have far many more votes?” Lott asked The Daily Signal in an interview. “If you have a get-out-the-vote campaign, you care about winning the state, [and are] not focused on the precinct.”

Lott’s study found that at least 255,000 excess votes were cast—and possibly as many as 368,000—for Democratic nominee Joe Biden in six states: Arizona, Georgia, Michigan, Nevada, Pennsylvania, and Wisconsin.

Biden beat then-President Donald Trump, the Republican nominee, by a total of 313,253 votes in the six states.

The potential number of fraudulent votes is reached by comparing the number of votes cast in bordering precincts on opposite sides of a county line. In some cases, Lott said, voters could be neighbors who live across the street from one another.

“To isolate the impact of a county’s vote-counting process and potential fraud on candidates’ vote margins, I first compare voting precincts in a county with alleged fraud to adjacent precincts in neighboring counties with no allegations of fraud,” Lott’s study says, according to a published abstract. He continues:

Rather, he writes, the analysis indicates that concerns about voter fraud are legitimate and undermine confidence in elections.

‘Have to Be Careful’

Many statements from Trump allies criticizing the 2020 election lacked evidence, which discredited concerns about fraud, Lott told The Daily Signal.

“There were people, perhaps well-meaning, who didn’t check out information before going public with it,” Lott said. “You have to be careful with these things.”

Lott said he waited to talk about his research until it was fully peer-reviewed. He said that process took more than a year, a longer review than usual.

Lott is a former senior adviser for research and statistics at the Justice Department’s Office of Legal Policy, where he dealt with issues of voter fraud, among other matters.

He has been among the most-cited economists in the world, according to an analysis by the Free University of Brussels, or Université libre de Bruxelles.

“John Lott is a serious scholar who does very good, in-depth research,” said Hans von Spakovsky, a senior legal fellow at The Heritage Foundation, parent organization of The Daily Signal.

“I am very interested in reading his study when it comes out, in particular to see what lessons it provides for how states can improve the integrity of their election process,” von Spakovsky, who manages Heritage’s Election Law Reform Initiative, said.

The Brennan Center for Justice, a left-wing think tank at New York University School of Law, contends that voter fraud in the United States is a “myth.” The center did not respond to The Daily Signal’s request for comment for this report.

Lott’s study compared precincts in Georgia’s Fulton County to neighboring precincts in border counties. The comparisons show what Lott describes as an unexplained 17,000 votes from Fulton County. That’s 32% more than Biden’s official 12,000-vote margin over Trump in the entire state.

Biden carried Pennsylvania by about 80,000 votes.

“When I examine Georgia and Pennsylvania separately, weak evidence of vote fraud on absentee ballots is found,” Lott’s abstract of the study says. “However, combining the samples produces significant results and implies at least 10,000 additional votes for Biden in Pennsylvania’s Allegheny and Georgia’s Fulton counties.”

I then apply the same method to provisional ballots in Allegheny County, where, contrary to state law, voters were allowed to correct alleged defects in absentee ballots by submitting provisional ballots on Election Day. My analysis finds that such permission contributed to a statistically significant additional 6,700 votes for Biden.