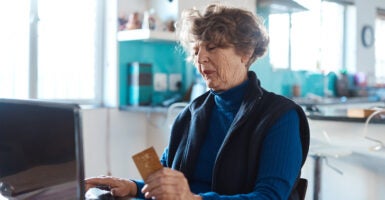 Senior citizens and low-income Americans will be hardest hit by the more than 2,670 regulations that the Biden administration plans to implement. (Photo: RapidEye/Getty Images)

Public attention is understandably focused these days on the inflationary effects of massive government spending, which has increased the national debt by $7 trillion in the past two years. No less dire are the repercussions of the Biden administration’s radical regulatory agenda.

The president’s 2022 regulatory to-do list includes 2,678 “active” actions, which exceeds by 35% the number of rule-makings in the Trump administration’s second-year agenda.

Some 200 of the regulations are designated as “economically significant”—i.e., regulations that are each expected to have an annual effect on the economy of $100 million or more. These include more stringent standards on the “housing environment” of chickens, rear seat belt reminder systems, and the use of “healthy” on food labels, as well as new restrictions on medical insurance options.

None of more than 450 federal agencies track regulatory costs either cumulatively or in the aggregate. The most widely cited estimate pegs the annual private sector cost of compliance as exceeding $2 trillion.

Despite their enormous costs, few, if any, of the thousands of looming rules are necessary or beneficial. For example, the Biden agenda is brimming with global warming dictates that will have absolutely no effect on climate. Just this week, the Securities and Exchange Commission proposed requirements for publicly owned companies to disclose purely speculative “climate risks.”

The Biden administration is dedicated to canceling the commonsense regulatory reforms instituted by former President Donald Trump, who reduced the volume of new regulations by 74.9% compared to the Obama administration (within the same period).

Among President Joe Biden’s targets: Trump’s long-overdue modernization of permitting procedures. Undoing that would drive up the costs of repairing the nation’s roads, bridges, airports, and railways.

Dozens of the Biden regulations will encroach on state and local affairs, including how Americans fuel our cars and heat our homes, educate our children, zone our communities, and construct our roads. The feds are even prescribing qualifications of state employees who provide services to farmworkers and the criteria for evaluating career training programs.

Such excessive federal interference inhibits policy competition among states and subordinates the relative transparency and accountability of state- and local-level regulation. It also impedes the ability of both citizens and businesses to escape flawed policies by crossing state borders.

In introducing its regulatory plan, the White House boasted that federal agencies will “build on significant progress the administration has already made advancing our priorities and proving that our government can deliver results.” But this conceit about the federal government’s efficacy and beneficence is deeply misguided.

Regulations shift labor and capital away from innovation and job creation to compliance activities, including the purchase of equipment, process and product reengineering, retraining, and loads of legal advice. There are also indirect costs such as deferred research and development, heightened barriers to competition, and diminished job creation.

While a burden for all, regulatory overreach harms low-income families and fixed-income seniors the most. The billions of dollars in compliance costs translate to higher consumer prices that exhaust a relatively larger share of their household budgets.

Biden’s expansive regulatory agenda represents a massive tax. It is the worst course possible at any time—but particularly now, when regulatory escalation will exacerbate runaway inflation and inhibit recovery from the COVID-19 lockdown.

More broadly, this unconstrained federal power grab is antithetical to the limited government of America’s founding, its constitutional framework, and its republican ideals.