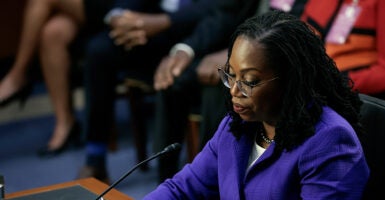 The issue with Ketanji Brown Jackson, the 51-year-old federal appellate judge who is our senile president’s Supreme Court nominee, is not necessarily her on-paper qualifications.

By most traditional metrics, she is “qualified”: She has served as both a district court and appellate court judge, served as vice chair of the U.S. Sentencing Commission, formerly clerked for Justice Stephen Breyer (the man she has been nominated to replace) and is a double-Harvard alum. In terms of “objective” criteria, this is an impressive resume.

Instead, the issue with Jackson is that she is a left-wing ideologue who, if successfully confirmed by the Senate, will devote the next few decades endeavoring to move the Supreme Court far to the left. All relevant indications are that she will approach her job not like her (slightly) more pragmatic former boss, but like a leftist activist—in the mode of her possible future colleague, the midwit partisan flack Justice Sonia Sotomayor.

Worse, Jackson, due to the outrageous race- and sex-conscious nominating process in which President Joe Biden selected her, is uniquely unfit to render equal justice under the law for legal issues affecting race and sex.

Even worse, she is a proponent of critical race theory and, despite getting nominated solely due to her XX chromosomal structure, appears ignorant as to how to differentiate men from women. Worst of all, she has shown a peculiar juridical soft spot for some of society’s very worst offenders—pedophiles and child pornographers.

In a just world, Jackson’s nomination to replace Breyer would be soundly defeated. And at a bare minimum, every Republican senator should vote against her.

In her Senate Judiciary Committee confirmation hearing, Jackson has sometimes adopted more “conservative”-sounding language, speaking of a judge’s putative umpire-like role in simply calling shots and even paying nominal fealty to the idea that legal provisions ought to be interpreted in accordance with their meanings at the time of enactment. In that sense, one hearkens back to Justice Elena Kagan, who famously said at her own Obama-era Supreme Court confirmation hearing that “we are all originalists now.”

But such hollow language has obviously not prevented Kagan, post-confirmation, from ruling in farcical, radically unmoored fashion in any number of crucial cases, such as the religious liberty case of Burwell v. Hobby Lobby, the same-sex marriage case of Obergefell v. Hodges and the immigration case of Trump v. Hawaii. No one should expect a hypothetical Justice Jackson to be any different.

In fact, Jackson would actually be even worse. Kagan, like Breyer, has at least occasionally been somewhat sensible on issues of religious liberty. But Jackson, when asked this week by Sen. John Cornyn, R-Texas, about how she views religious liberty concerns in the context of Obergefell’s constitutionalized same-sex marriage, flippantly scoffed that the repeat occurrence of such conflicts is simply “the nature of a [constitutional] right” (in this case, to same-sex marriage).

Translation: Deal with it and bow before the rainbow flag, silly religious dissenters.

During the brief nomination sweepstakes, before Biden formally tapped Jackson, the D.C. Circuit judge emerged as the clear-cut favorite of many of the left’s foremost lobby groups—among them the Human Rights Campaign, NARAL Pro-Choice America, Planned Parenthood, and the George Soros-funded Open Society Policy Center.

It is no secret why. In a 2020 speech, Jackson referred to Nikole Hannah-Jones, the pseudo-academic fraud at the center of the civilizational arson that is The New York Times’ 1619 Project, as an “acclaimed journalist.” In that same speech, Jackson—who, again, is a former vice chair of the U.S. Sentencing Commission—favorably alluded to the role that critical race theory purportedly plays in sentencing decisions. Such a suggestion would merely be laughable were it not so insidious.

Speaking of sentencing, Jackson’s track record as a district court judge is, unsurprisingly, very bad on this score. As brought to light by Sen. Josh Hawley, R-Mo., Jackson seems to have an unusual soft spot for—of all people—child pornographers.

As a district court judge, Jackson consistently sentenced those caught up in the unspeakably vile business of child pornography with lower sentences than sentencing guidelines recommended. Just this week, The Washington Post reported how one scumbag pedophile Jackson sentenced to a staggeringly low three months—instead of the guidelines’ recommended eight years—has since reoffended. Surprise!

Curiously, the White House has responded to Senate Republicans’ entirely reasonable requests for full documentation of her work at the Sentencing Commission by withholding a whopping 48,000 pages of documents. What is the White House trying to hide?

There is not much worse than a Supreme Court justice with a soft spot for mollycoddling pedophiles—a position Jackson has actually held since law school, when she first questioned the wisdom of making child pornography convicts register as sex offenders.

Most fundamental, the very fact that Jackson was expressly and overtly nominated due to her genitalia and skin color necessarily calls into doubt her ability to rule in an impartial way on future Supreme Court cases pertaining to sex and race.

How can someone who literally would not have been selected if she were white, for example, be expected to impartially rule in an affirmative action case? (As the case may be, Jackson will likely recuse herself from the Supreme Court’s affirmative action case next term because of her long-standing professional involvement with the defendant, Harvard University.)

And when it comes to sex, amid the metastasis of the transgender craze and the visceral horror that is biological male Lia Thomas dominating NCAA women’s swimming events, Jackson wouldn’t even define what a “woman” is when pressed—on the grounds that she is “not a biologist.”

Under this logic, it is actually impossible to see how Jackson could adjudicate Title VII or Title IX cases, which directly implicate sex-related discrimination. One also wonders whether Jackson believes someone must be an oceanographer to render a verdict as to the color of the sea. How pathetic.

Reject Ketanji Brown Jackson for the Supreme Court and do so posthaste.