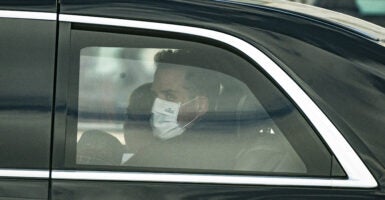 It’s hard to think otherwise during the arc of the Hunter Biden laptop story that turned out to be true.

Last week, The New York Times reporters wrote that they authenticated email “obtained by The New York Times from a cache of files that appears to have come from a laptop abandoned by Mr. [Hunter] Biden in a Delaware repair shop.”

This is in reference to a story the New York Post broke in 2020, shortly before the presidential election, about emails sent from the laptop of the president’s son, Hunter. The emails suggest that Hunter was using his father’s name and office to enrich himself. It raised serious questions about whether now-President Joe Biden was involved in any way.

Don’t go celebrating The New York Times’ sudden commitment to truth and accuracy. The paper buried the lede and put the acknowledgment that the emails were real on the 24th paragraph of its story.

No grand mea culpa here, just a little acknowledgment that it got things wrong a year late and a dollar short.

When the story initially broke, the Times and most of the legacy media dismissed it entirely. They called it a non-story and promoted the idea that it was likely Russian disinformation.

NPR explained that it just couldn’t cover the story because its “assertions don’t amount to much.”

This is the same publicly funded media network that found time to air a segment about “decolonizing fitness,” and how exercising is white supremacy or something.

It wasn’t just the legacy media that went radio silent about the story, refusing to even investigate the issue. Big Tech swung into action to ruthlessly suppress the Post exposé from being disseminated. Twitter outright prevented people from posting it on the website, and Facebook used its internal algorithm to prevent people from seeing it.

Jack Dorsey, who was the Twitter CEO when the Hunter laptop story was suppressed, said that blocking the story was a “total mistake,” but never explained how the mistake was made and was replaced shortly thereafter by a man who is even less enamored with free speech.

As my colleague Katrina Trinko pointed out, the Hunter Biden story certainly demonstrates the sham of Big Tech’s war on “misinformation.”

Is Big Tech conducting a genuine effort to stop misinformation, or is this really just a smoke screen to justify the suppression of information or ideas that interfere with the Democrat Party’s agenda?

To top this whole mess off, when the Post initially broke the Hunter laptop story, a group of former senior “intelligence experts” put their name to a statement saying that the Hunter Biden story has all the “classic earmarks of a Russian information operation.”

They had no actual evidence besides their claims to expertise.

Trust the experts! Isn’t that what we are told all the time these days?

“If we are right, this is Russia trying to influence how Americans vote in this election, and we believe strongly that Americans need to be aware of this,” the former intelligence officials said.

Biden even used this letter in a debate with former President Donald Trump in the 2020 presidential campaign to prove it was all just Republican misinformation.

Well, they were wrong. It appears that it was actually politicized former senior intelligence operatives who were trying to influence our elections. Americans need to be aware of this.

Has there been any accountability for all these people and institutions that got this wrong? Not at all.

Of the 51 former senior officials, so far none have apologized or demonstrated any kind of accountability for what they did. Some even doubled down.

Former Director of National Intelligence James Clapper only said that he stands by the statement they made “AT THE TIME.” No explanation for why it was bogus or contrition for misleading the American public.

Andy Liepman, former National Counterterrorism Center deputy director, said in his statement to the Post, “As far as I know I do [stand by the statement] but I’m kind of busy right now.”

It seems some in our intelligence services have forgotten that they serve us rather than the other way around.

The former intelligence officials didn’t just get the facts wrong, as the New York Post pointed out. They actively tried to turn a story about potential Biden family corruption into a story about how Russian election interference was victimizing the Bidens.

They used their positions, or former positions, as a pedestal of authority when they were engaging in what now appears to be political hackery.

When you put this all together, the Hunter Biden laptop story is about much more than media malpractice and political hackery in the intelligence services.

It’s about even more than just Big Tech censorship.

The bigger story is about how all the above, in unison, work together to suppress information that hurts an ideological and political cause that they value most and amplify favored narratives regardless of merit.

They are now in lockstep promoting the “narrative” over the truth.

Elite institutions once thought to be nonpartisan, bipartisan, or at least somewhat objective are becoming ruthlessly ideological and perfectly willing to use their power to crush dissent.

In the case of the Hunter Biden story, there were clear implications for what looked like a closely matched presidential election.

A Media Research Center poll of Biden voters in key 2020 election swing states found that not only were many of these voters unaware of the Hunter Biden story, but about 10% also said that its revelation would have changed their vote.

Think about this for a moment. For years, this same nexus of institutions promoted the Russia collusion story about Trump. The New York Times and Washington Post won the Pulitzer Prize for their coverage, which led indirectly to Trump’s impeachment.

As the Russia collusion story was winding down, the Biden laptop reporting broke and was ruthlessly suppressed on the eve of a presidential election. The story was dismissed as based on nothing but preposterous, pernicious Russian disinformation. It was also true.

If they got these things so wildly wrong and were willing to use all their power to project ultimately false information to the public, what else have they been wrong about and what other things are they willing to suppress to produce favorable political outcomes?

Again, there has been effectively no acknowledgment of failure from the institutions themselves, no explanation for what happened.

Wall Street Journal editor Gerard Baker called this America’s crisis of accountability. He wrote that the way people in power can be kept in check is through the ballot box.

“But how can that even work when the people we want to hold accountable decide what information the voters are allowed to see?” Baker asked.

That’s a fair and chilling question. That’s why the Hunter Biden story is a big deal.

The possibility that the president’s son used his father’s official position to enrich himself is bad enough. But it’s nowhere near as threatening to our free society than the institutional corruption that suppressed and manipulated the story to suit political ends from the beginning.

This story, at its heart, is about a willful distortion and suppression of truth and reality by those who believe they will never be held accountable.