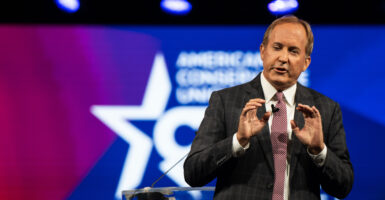 Texas Attorney General Ken Paxton—seen here speaking at the Conservative Political Action Conference on July 11, 2021, in Dallas—warned the Austin school district it's likely in violation of state law with its "Pride Week" activities, many of them deliberately occurring behind parents' back. (Photo: Brandon Bell/Getty Images)

Paxton, a Republican, told the Austin Independent School District that its Pride Week events are in “violation” of state law, according to the letter he sent the district. Paxton said Texas law requires students to get “written consent” from parents before providing instruction on “human sexuality.”

“By hosting ‘Pride Week,’ your district has, at best, undertaken a weeklong instructional effort in human sexuality without parental consent,” Paxton wrote. “Or, worse, your district is cynically pushing a weeklong indoctrination of your students that not only fails to obtain parental consent, but subtly cuts parents out of the loop. Either way, you are breaking state law.”

He encouraged the district to take “immediate action to rectify this situation” and told parents they can file grievances with the Austin Independent School District’s school board and the Texas Education Agency.

In response to Paxton’s letter, Austin Independent School District Superintendent Stephanie S. Elizalde said she wanted all of the school district’s “LGBTQIA+ students to know that we are proud of them and that we will protect them against political attacks.”

Just one day into the weeklong, districtwide event, Paxton said his office received reports that students were encouraged to keep conversations about “sensitive topics … confidential, presumably from parents.”

At Doss Elementary School, children were encouraged to “keep what happened” at Pride Week events between students and school staff “confidential,” according to documents posted to Twitter.

“What we say in this room stays in this room,” pre-K through second grade students were told, according to the Pride Week documents posted on Twitter.

The week’s events include “community circles” that are confidential “in the sense that makes students feel trusted and respected for their privacy,” Eduardo Villa, the school district’s media relations specialist, previously told the Daily Caller. “We aren’t worried about Paxton’s letter. Pride Week and sex education are different,” Villa said in a statement to the Daily Caller News Foundation on Thursday. “Celebrating diversity and acceptance is completely legal.”

“With just one full day of ‘Pride Week’ on the books, we received reports of ‘community circles’—group discussions on sensitive topics that students are encouraged to keep confidential, presumably from parents,” Paxton said in his letter. “The Texas Legislature has made it clear that when it comes to sex education, parents—not school districts—are in charge.”