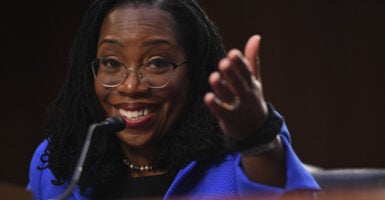 Under questioning from Sen. Ted Cruz, R-Texas, at her Supreme Court hearing, Judge Ketanji Brown Jackson ran away from critical race theory as fast as possible. Her record says otherwise, however. Pictured: Jackson testifies on her nomination to become an associate justice of the Supreme Court on March 23. (Photo: Saul Loeb/AFP/Getty Images)

Under questioning from Sen. Ted Cruz, R-Texas, at her Supreme Court hearing, Judge Ketanji Brown Jackson ran away from critical race theory as fast as possible. Her record says otherwise, however. The candidate’s past embrace of some of critical race theory’s leading proponents is concerning, and shows that she has so far gotten off easy during her hearing.

The judge’s interest in critical race theory began early. Her parents, Jackson said in a 2020 speech at the University of Michigan Law School, prominently kept a copy of “Faces at the Bottom of the Well,” a book by Derrick Bell, long recognized as the godfather of critical race theory.

“My parents had this book on their coffee table for many years, and I remember staring at the image on the cover when I was growing up,” Jackson said.

The book is curious, not least for the fact that in it, Bell continued his long-standing diatribe against President George H.W. Bush’s nomination of Clarence Thomas to the same high court where Jackson is likely headed. A few quotes from the book give a flavor of how much easier Jackson’s nomination has by comparison gone so far.

“Given Thomas’ modest academic background, relative youth, lack of litigation experience, and undistinguished service in appointive government positions,” Bell writes, “only his ‘enhanced standing’ … as a well-known critic of affirmative action and civil rights policies and leaders in general could have won him priority over the multitude of lawyers, white and black, with more traditional qualifications for a seat on our highest court.”

Bell was even more mean-spirited in other writings on Thomas. In 1992, he had a tantrum right after the nomination.

He wrote in the essay “Racial Realism” that “the choice of a black like Clarence Thomas replicates the slave master’s practice of elevating to overseer and other positions of quasi-power those slaves willing to mimic the master’s views, carry out orders, and by their presence provide a perverse legitimacy to the oppression they aided and approved.”

In her exchange with Cruz, Jackson insisted that she had never studied critical race theory. “It wouldn’t be something that I would rely on if I was on the Supreme Court,” Jackson said to Cruz.

In 2015, however, Jackson said that she tries to convince her students that sentencing “melds together myriad types of law,” including “administrative law, constitutional law, critical race theory,” etc.

That is in itself a red herring. As we never tire of pointing out, even if critical race theory is not assigned to K-12 students, it is likely applied, such as, for example, when teachers and trainers force students to perform “anti-racism” trainings that separate them by race or ethnicity.

But it is also often taught. When Cruz pressed further and told Jackson that her statement that critical race theory is only taught in law schools was “a little hard to reconcile with the public record” because Jackson serves on the board of a school whose curriculum is “filled and overflowing with critical race theory,” Jackson could only answer: “To the extent that you were asking the question I understood you to be addressing public schools.”

Jackson indeed serves on the board of an elite Washington, D.C., private school that teaches critical race theory, Georgetown Day School, and whose curriculum she has supported. She was quoted as saying in the 2019/2020 winter edition of the school’s magazine:

Since becoming part of the GDS community seven years ago, Patrick [her husband] and I have witnessed the transformative power of a rigorous progressive education that is dedicated to fostering critical thinking, independence, and social justice.

As law professor Jonathan Turley noted in a column the day of the hearing, Kendi also meanly trashed now-Justice Amy Coney Barrett during her nomination hearing in 2020 for a trait that Jackson shares: having an interracial family.

“Even the fact that the Barrett family is interracial (like the Jackson family) was not off-limits. Ibram X. Kendi, the director of the Center for Antiracist Research at Boston University, declared that her adoption of two Haitian children raised the image of a ‘white colonizer’ and suggested the children were little more than props to their mother,” wrote Turley in USA Today, noting that Jackson is getting respect that Barrett was denied.

Critical race theory is an ideology whose foundational idea is that racism in America is systemic, that our society is oppressive, that racial identity reigns supreme, and, more worryingly for a prospective justice, that government must pursue race-conscious policies.

This puts in context why, in the same Michigan speech, Jackson praised the “acclaimed investigative journalist Nikole Hannah-Jones” and “her provocative thesis that the America that was born in 1776 was not the perfect union that it purported to be.”

Hannah-Jones, the architect of the 1619 Project, is a fabulist whose revisionist attempt to change America’s origin story from 1776 to 1619, when African slaves first arrived on the English colonies, has been debunked by historians.

We can all be thankful that Jackson’s work on behalf of Harvard University should force her to recuse herself from the case the Supreme Court will hear next year on that school’s use of racial preferences.

Turley indeed wrote earlier this month that “it would be profoundly inappropriate for a jurist to sit on a case for a school in which she has held a governing position and a role in setting institutional policies.”