Republicans, Embrace the Culture War and Cruise to Victory 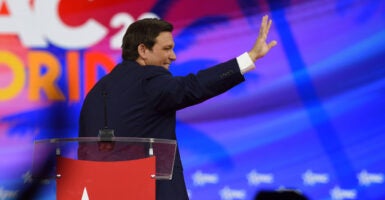 Gov. Ron DeSantis has repeatedly demonstrated his understanding of the threat woke capital poses to the American way of life. Pictured: DeSantis waves as he leaves the stage after addressing attendees on Day One of the 2022 Conservative Political Action Conference in Orlando. (Photo: Paul Hennessy/SOPA Images/LightRocket/Getty Images)

For conservatives and Republicans, the present flare-up in Ukraine has shone a spotlight on the extent to which there is profound foreign policy disagreement within the broader ranks.

From the ultra-hawkish calls for a U.S.-imposed no-fly zone or even the assassination of Russian strongman Vladimir Putin from the likes of Rep. Adam Kinzinger, R-Ill., and Sen. Lindsey Graham, R-S.C., to the nightly appeals for sobriety and de-escalation from Fox News host Tucker Carlson, the right remains deeply divided on questions pertaining to foreign policy, in general—and how best to secure the American national interest in the Eastern European theater, in particular.

But whatever disagreements presently exist within the fold when it comes to foreign policy, most Republican voters are on the same page when it comes to their view of how the party should confront the left’s destructive cultural agenda.

At a time when the militant left seeks to let biological men run roughshod over the very notion of femininity and to indoctrinate the younger generation in the civilizational arson that is critical race theory, Republican voters want their party to dive headfirst into the so-called culture war issues.

It is past time for Republican leaders to ditch their misplaced fixation on their dog-eared, cocktail party-friendly, supply-side economics playbook and to prudentially shift to a culture war-centric footing.

Consider the current battle in my state, Florida, over the sober and measured Parental Rights in Education bill that has nonetheless been disparaged by a supine corporate press as a nefarious “Don’t Say Gay” bill. The relevant provision inducing the ginned-up controversy, which as of this writing has been passed by the Legislature and awaits Gov. Ron DeSantis’ signature, reads:

Classroom instruction by school personnel or third parties on sexual orientation or gender identity may not occur in kindergarten through grade 3 or in a manner that is not age appropriate or developmentally appropriate for students in accordance with state standards.

Translation: Don’t teach 5- and 6-year-olds, who are learning how to read and count to 10, about sex stuff.

We have a word for the kind of person who gets hot and bothered about the overarching imperative to teach kindergarteners and first graders about the birds and the bees: pervert. Furthermore, to outsource those sorts of sensitive conversations to public school bureaucrats, away from the comforting confines of one’s own home, amounts to a reckless abdication of one’s parental duties.

But the all-too-predictable, ubiquitous reaction from what the late Andrew Breitbart called the “Democrat-Media Complex” was to lambast DeSantis and his fellow Florida Republicans for their homophobia, transphobia, fascism, or whatever other “-phobia” or “-ism” the blue-checked wokerati now deem vogue.

The Walt Disney Co., which is headquartered in California but has a famed Florida presence, also had a meltdown. CEO Bob Chapek noted his opposition to the bill and announced that in the aftermath of Disney’s failure to successfully lobby against its passage, it would suspend all political donations in the Sunshine State.

Over the past few days, some Disney employees in Florida have vowed to walk out during their work breaks—at least, one presumes, when they are not too preoccupied virtue signaling by adorning their social media profiles with Ukrainian flags. The mind truly reels at how passionate some folks seem to be about teaching youngsters about sex.

Amidst this intense backlash, DeSantis, who has repeatedly demonstrated his understanding of the threat woke capital poses to the American way of life, has remained defiant.

“You have companies, like Disney, that are going to say and criticize parents’ rights. They’re going to criticize the fact that we don’t want transgenderism in kindergarten, in first-grade classrooms,” he said last week at an event in Boca Raton. But “first graders shouldn’t have woke gender ideology imposed in their curriculums.”

DeSantis concluded: “And so in Florida, our policy’s got to be based on the best interest of Florida citizens, not on the musing of woke corporations.”

Fever pitch-level media and corporate hysterics aside, Florida Republicans’ stance is popular. A recent Politico/Morning Consult poll showed that Americans support DeSantis’ stand by a whopping 16-point margin. Interestingly, that was despite the Politico/Morning Consult pollsters’ inclusion of the misleading “Don’t Say Gay” smear in their phrasing of the question. A recent Daily Wire poll on the same question, which did not include the tendentious smear label, showed Americans in support of the Florida law by a massive 44-point margin.

By now, this sort of result ought to be unsurprising: Virginia Republicans swept statewide races in November by embracing the critical race theory issue. Critical race theory, just like gender ideology, offers Republicans the opportunity to support parental rights and cultural sanity against woke overreach and cultural insanity. Republicans should stop dithering and bring the fight to the core civilizational issues now confronting a confused citizenry.

America was not conceived in irredeemable racism, and it is not systemically racist today; biological sex still matters; parents must control their own children’s upbringing. Not only are these commonsense propositions but they are very popular ones.