Amazon Bails Out of Downtown Seattle Due to Violent Crime Surge, Dodges Consequence of Woke Policies 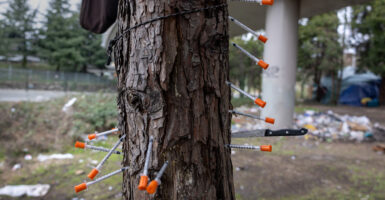 Heroin syringes hang stuck in a tree at a homeless encampment on March 13 in Seattle. Widespread drug addiction is endemic in Seattle's large homeless community, which the city is currently trying to move out from shared public spaces. The city has struggled with an uptick in homelessness and violent crime. (Photo: John Moore/Getty Images)

Amazon is getting out of Dodge. Well, more accurately, Seattle.

The massive, mostly online retailer announced recently that it’s relocating 1,800 employees out of a downtown Seattle location due to a huge uptick in violent crime.

“Given recent incidents near 3rd (Ave) and Pine (St), we’re providing employees currently at that location with alternative office space elsewhere,” an Amazon spokesman said, according to the New York Post. “We are hopeful that conditions will improve and that we will be able to bring employees back to this location when it is safe to do so.”

The Post noted that violent crime has rocked the city. In just the first week of March around the Amazon offices, a 15-year-old boy was shot and killed, a homeless man was stabbed, and police had to shoot and kill a man who rammed into a federal building and fired a rifle.

Amazon has been only too eager to hop aboard woke causes, but the company seems a little less enthusiastic about woke consequences.

Seattle has been one of many big cities in America that has been hit with an explosion in violent crime since the summer of 2020, following the anti-police protests that often turned to riots in the wake of George Floyd’s death at the hands of the Minneapolis police.

The trend hasn’t abated in 2022. If anything, it seems many cities are settling into a level of violent criminality not seen since the early 1990s.

Seattle has been one of the hardest hit. This is notable because before the crime spree, Seattle was a relatively safe city.

“Long one of America’s safest cities, Seattle had 612 shootings and shots-fired incidents last year, nearly double its average before the pandemic,” The Wall Street Journal reported in early March. “The city has just experienced its two worst years for homicides since the 1990s, when murder rates were at all-time highs.”

A 2021 year-end crime report demonstrated the depth of the problem in Seattle. The report showed a 20% increase in violent crime over the year before. The number of aggravated assaults, up 24% from the previous year, hit its highest point in over a decade. Other crimes were way up too, including larceny, motor vehicle theft, and arson.

Property crimes, which were up by 9%, may have even been undercounted.

“Many victims no longer bother to call the cops,” the Journal reported. “Responses to 911 calls can take hours, and criminals are released soon after they’re arrested. Businesses say they fear their insurance costs will spike if they report what’s really going [on].”

It’s notable that the protests that hit cities following Floyd’s death were particularly significant in Seattle. A group of anti-police activists took over several blocks around an abandoned police precinct and turned it into the Capitol Hill Autonomous Zone, which went by the acronyms CHAZ or CHOP.

The protesters envisioned a “world without police,” CNN reported at the time, but the anarchic zone collapsed after a number of notable violent incidents and a giant increase in violence became intolerable to residents and city leaders.

Seattle was one of many cities that foolishly decided to defund the police. No surprise, the police force in the city became undermanned and demoralized. Police officers left en masse. That exodus continues as the city now finds it difficult to hire qualified police officers.

For the activists who sought to defund the police, and pushed city leaders to do so, it was mission accomplished.

But the evidence came in swiftly that “de-policing” in cities was a recipe for staggering increases in crime and violence. The consequences cascaded and became long-lasting as cities like Seattle continue to see steady increases in crime with no end in sight.

It seems many Seattle businesses and residents have had enough with many residents saying that they want an increased police presence in their neighborhoods.

Not only that, normally deep-blue Seattle even elected a Republican with a strong law-and-order message to be the city attorney. She ran against a police abolitionist.

Elected Democrats are responding to this catastrophe by denying that they ever embraced the “defund the police” movement, or are now insisting that they are really for funding the police. But the reality is that they have done little or nothing to control the left-wing activists who took so many of our cities in this absurd direction.

Regardless of the Democrat pivot and denial to stem electoral defeats, the consequences of anti-police radicalism have been dire.

Amazon and other big companies may have the resources to bail out of now crime-ridden communities, but that is little consolation to the people left behind who now must suffer the consequences.

How many lives must be lost as a direct result of violent crime or indirectly derailed because entire communities have become dangerous?

Perhaps the violent crime trend will, in time, be reversed. Let’s not forget the lessons of this moment, nor the ideology that led to this disaster.