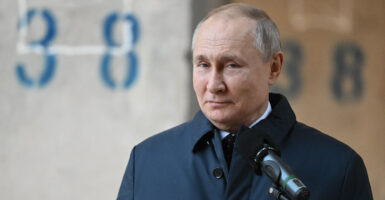 The U.S. can’t check everything Interpol does, but it could concentrate on Russia, China, and a few other known abusers. Pictured: Russian President Vladimir Putin visits the construction site for the National Space Centre on Feb. 27 in Moscow. (Photo: Sergei Guneyev/ Sputnik/AFP/Getty Images)

For years, Russia has been one of the worst abusers of Interpol. It uses the international police organization to harass political opponents and to brand as criminals any business leaders who own property the Kremlin wants to steal.

No serious observer of Interpol denies these facts. When Anat Granit, former head of the agency that handles Israel’s relations with Interpol, was asked specifically whether Moscow uses Interpol to hunt enemies, her response was simple: “Without a doubt.”

This kind of abuse is explicitly against Interpol’s most fundamental rules, which require the police organization to avoid every form of politicization and focus solely on ordinary crime. The recently enacted National Defense Authorization Act for fiscal year 2022 requires the U.S. to take a stand against abuse of Interpol.

Interpol’s rules don’t provide for expelling Russia, although it could be done by a vote in the organization’s General Assembly, which replaced Taiwan with Communist China in 1984.

But Interpol does have suspension procedures—and long before Russia’s invasion of Ukraine, ample grounds existed for suspending Russia. Interpol’s bureaucracy has the right to do this by itself, although any “long-term” suspension must be approved by its 13-member Executive Committee.

Shortly after Russia invaded Ukraine on Feb. 24, calls began to circulate for Russia to be suspended, or indeed expelled, from Interpol. Unsurprisingly, Ukraine was the first to speak out, seconded by Britain, with support coming shortly thereafter from Poland and Canada.

Then the United States joined the fight. The U.S. acted March 3 in concert with its closest intelligence partners—Australia, Britain, Canada, and New Zealand—by requesting Russia’s suspension. That request was considered the following week at a meeting of Interpol’s Executive Committee.

The omens for the vote in the Executive Committee were not good. The balance of power there tilted decisively against the U.S. and the democratic world in November, when a slate of new delegates, mostly from autocratic or abusive regimes, was elected. As The Heritage Foundation warned, those elections were a disaster.

The Executive Committee now is led by the United Arab Emirates, a known abuser of Interpol. It includes representatives from China and Turkey. All three almost certainly would support the Kremlin. The U.S. could count only on its own vote, Britain’s, and the Czech Republic’s.

Interpol announced the outcome of the committee’s vote March 10. Unsurprisingly, Russia escaped suspension from Interpol. Instead, its communications through Interpol will be subject to “heightened supervision and monitoring.”

“Calls at the political level have been made to suspend or exclude Russia from the Interpol network,” the police organization said.

But it also noted that “law enforcement leaders from around the world have also requested continued cooperation with Russia via Interpol.”

It’s very likely that China’s cops did make that request. But requests by police officers from totalitarian regimes to break the rules shouldn’t carry any weight.

Interpol followed up with this claim: “As long as the Interpol network can assist in the rescue of one child abuse victim, the prevention of one terrorist attack or the identification of one missing person, it is its duty to ensure that lines of communication remain open.”

It never was likely that Interpol would act against Russia. It used to be understood that, if you wanted to be part of the international system, you had to play by a few minimal rules. But that understanding disappeared in the aftermath of World War II.

Today, the idea that there should be standards for membership in the club of civilization is alien.

But that doesn’t mean the U.S. is powerless to halt Russia’s abuse of Interpol. It can carry out the provisions of the National Defense Authorization Act and name Russia as an Interpol abuser.

The U.S. also can ban Russia from accessing any U.S. information held in databases maintained by Interpol. As Interpol itself has stated, “each member country maintains full control over the information they decide to share with other countries via Interpol. That includes the restriction of access to its data.”

The United States can ban the use of all Russian communications (and those from other abusive nations, such as China) through Interpol in any federal legal proceeding in America. This, too, unquestionably is allowed by Interpol’s rules, as the organization itself acknowledges.

Legislation that would have gone far toward achieving this end has  been introduced repeatedly in Congress, and repeatedly has met resistance from the U.S. Justice Department. It is time for that resistance to end.

The U.S. also can mandate that the U.S. National Central Bureau, which coordinates U.S. communications to and from Interpol, take on the job of helping to police the police organization’s system.

Every Interpol member nation has its own national central bureau. Under Interpol’s rules, these bureaus are supposed to be a major line of defense against Interpol abuse. Of course, the U.S. can’t check everything Interpol does, but it could concentrate on Russia, China, and a few other known abusers.

Traditionally, national central bureaus aren’t interested in taking on this role. They see their job as catching bad guys, not stopping bad nations.

It’s time for Congress to require the U.S. National Central Bureau to rethink how it understands its job. If the bureau had a human rights unit with mandated liaison with the State Department, and an ombudsman designed to receive complaints, it would be much better positioned to play this wider role.

And of course, the U.S. need not act alone. All of its democratic allies—in particular, English-speaking nations that led the charge against Russia in Interpol—may do, and should be urged to do, exactly the same thing.

Finally, the U.S. is Interpol’s biggest funder. We pay 15% of its bills. The top six democratic contributors (the U.S., Germany, Japan, Canada, the U.K., and France) pay 40% of those bills.

We need to use our financial power, in cooperation with our allies, to push Interpol to be more transparent and more effective in its oversight of communications from member nations who abuse Interpol.

Until membership of the Executive Committee turns over significantly in 2024, it will be hard for the U.S. to win a vote there against Russia. It will be even harder to win a vote in Interpol’s General Assembly, where free nations are a minority.

We cannot stop all abuse of Interpol. We will find it difficult to suspend Russia from Interpol, never mind kick it out. But we can raise significant barriers to Russian abuse, and build significant protections against it in the U.S. and around the democratic world.

That is a good place for America to begin.