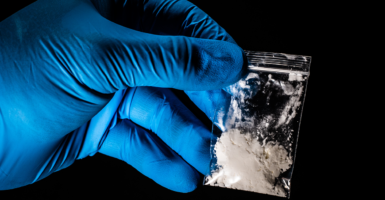 Fentanyl is responsible for tens of thousands of drug overdose deaths across America. Just 2 milligrams can be lethal. (Photo: Darwin Brandis/Getty Images)

As the fentanyl crisis ravages the country, elected officials and former border protection and drug enforcement officers are calling on the Biden administration to take action to secure the U.S.-Mexico border.

“If you look at the age group of people between 18 and 45 over the past year, the leading cause of death is not COVID. It’s not cancer. It’s not car wrecks. It’s not guns. The leading cause of death with that age group is fentanyl, and it is devastating,” Texas Gov. Greg Abbott said during a panel discussion hosted by The Heritage Foundation on Thursday. (The Daily Signal is the news outlet of The Heritage Foundation.)

Heritage Foundation President Kevin Roberts opened the event by stressing that’s not a Democrat or Republican issue, but a human issue.

“Sadly, the fact that more than 100,000 Americans lost their lives to a drug overdose between April 2020 and April 2021 is a grim reminder of the severity of the drug abuse epidemic in this country,” Roberts said. “The driving force behind most of those overdose deaths are synthetic opioids, primarily fentanyl, a drug chiefly created in clandestine laboratories run by Mexican cartels, who source their chemical precursors from China.”

Abbott said Texas has had to take unprecedented state action to protect its border in the absence of federal assistance from the Biden administration. Texas has increased the presence of National Guard and Texas Department of Public Safety officers, has seized more than 200 million doses of fentanyl, and has started building its own border wall, he said.

“Texas is not going to sit idly by. We’re going to step up and do everything we possibly can for Texas to do the federal government’s job to secure the border,” Abbott said. “The situation has risen to such high profile that it’s time for all hands on deck. Texas will continue to step up … but we need all of America to step up.”

He said that many victims of the drug epidemic are not addicts or opioid users, but young adults who take a pill or drug for the first time and don’t realize it’s laced with a small but deadly amount of fentanyl.

In addition to drug overdose deaths, the lack of federal action to secure the border leads to gang violence, drug cartel control of the border, and human trafficking, Abbott said.

He added that despite thousands of deaths, “we have a president who is refusing to even talk about, to recognize it, to step up, and do anything about it.”

‘This Crisis Is Completely Man-made’

Babin blamed many of the drug problems facing the country on the Biden administration’s eagerness to open the border.

“America is treated like second-class citizens in favor of those who break our laws, who come here illegally and do an unbelievable amount of damage,” he said. “The most maddening thing is that this crisis is completely man-made. This danger is self-inflicted.”

Babin said that because of the Biden administration’s weak border security, drugs are entering the U.S. in historic quantities.

“I wish someone from the Biden administration could explain to me how enforcing our immigration laws and securing our borders is cruel or inhumane,” he said. “The inhumanity is that loving mothers and fathers all over this country will never hear their children’s voices again because they were unintentionally exposed to this deadly poison of fentanyl.”

Babin said fentanyl is 50 to 100 times stronger than morphine, and that just 2 milligrams can be fatal.

“I’m a dentist by profession. I used to do a lot of operating procedures in the early part of my career, and fentanyl belongs in the operating room,” he said.

‘Tell Mexico That They Need to Step Up’

Dhillon said part of the reason for the drug crisis is that the U.S.-Mexico relationship “has collapsed and has not been repaired.”

After a series of conflicts between the two countries, Dhillon said, the Mexican legislature made it harder for U.S. agencies to operate in that country by requiring DEA agents to report their intelligence data to the Mexican government.

“Given the extraordinary corruption in Mexico, that’s the equivalent of basically telling the drug cartels everything,” he said.

“So, the Biden administration has a role here, and it’s an important role, and it is basically to tell Mexico that they need to step up to the plate and cooperate with federal law enforcement again,” he said. “We need to take the battle to the Mexican drug cartels where they live, in Mexico. And right now, the Mexican government is preventing us from doing that.”

According to Dhillon, although the “Mexican cartels basically control our border now,” there is hope the U.S. can take back control of its side of the border by arresting and prosecuting drug traffickers.

“One of the things we can do, notwithstanding Mexico’s failure to cooperate with us anymore, is we can really ramp up those domestic operations and do our best to destroy the command-and-control operations of the drug cartels right here in the United States,” he said.

‘Why Is It Not a Priority to Secure Our Borders?’

Morgan said that while looking through Congress’ latest 2022 omnibus spending bill, he was able to find the term “border security” just 13 times in the 2,700-page bill—and 11 of the 13 references were about securing other countries’ borders.

“[We had] 100,000 drug overdoses in a 12-month period, that’s more than all the … American lives lost [in] the Vietnam, Afghanistan and Iraq wars combined,” Morgan said. “It dwarfs the deaths from 18 to 25 of any other crisis we have in the country, and we know as a matter of fact—not opinion, not hyperbole—that the overwhelming amount of drugs come from our southwest border. So, why is it not a priority to secure our borders?”

He said there’s what he called a “false narrative” that illegal immigration, border security, and the drug crisis are not interconnected.

“When we look at the 3 million migrants trying to break into our country illegally … every one of those paid the cartels. That illegal immigration is fueling and financing the cartels’ criminal operations. It’s making them stronger,” Morgan said. “And it’s also enabling their criminal schemes in other areas, including drugs, to expand.”

Morgan said that although existing drug seizures are significant, Americans should be worried about the amount of drugs that elude law enforcement.

“Nobody here can actually give you an accurate figure of the amount of drugs that are actually pouring across our border because it’s wide open,” Morgan said. “But I can tell you, because of this administration’s open-border policies that are driving historic levels of illegal immigration higher than we’ve ever seen in our history, our borders are more wide open and less secure than they ever have been.”