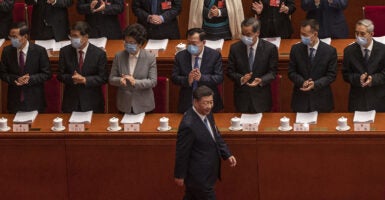 China convened its annual National People’s Congress March 5-11. The event was designed to emphasize a single theme: stability. Pictured: Chinese President Xi Jinping, bottom, is applauded by members of the government as he arrives at the opening session of the National People's Congress at the Great Hall of the People on March 5 in Beijing. (Photo: Kevin Frayer/Getty Images)

Michael Cunningham is a visiting fellow in The Heritage Foundation’s Asian Studies Center.

China’s annual session of the National People’s Congress—a “rubber-stamp” parliament whose outcomes are predetermined by Chinese Communist Party officials—concluded on March 11. The overriding message of the session was simple: Make sure nothing gets in the way of President Xi Jinping’s bid for a third term in power.

The purpose of the session was to outline policy priorities, establish economic targets, and give government organizations marching orders. It was the last such gathering before the 20th National Congress of the Chinese Communist Party, which is set to be held this fall.

The most widely reported development of the rubber-stamp parliament session was the ambitious gross domestic product growth target of 5.5%, which, despite being China’s lowest target in over three decades, exceeds the projections of many international organizations, including the International Monetary Fund’s forecast of 4.8% growth.

Also notable was a deemphasis of some ambitious long-term goals, such as carbon neutrality, in favor of preserving energy security and maintaining economic stability, which was declared as the year’s top policy goal.

Some of Xi’s more controversial and disruptive policies, such as common prosperity, were also deemphasized, though not entirely absent from the discussions and policy documents, leading some to question whether Xi’s influence is waning.

Such speculation is not necessary. While Premier Li Keqiang and National People’s Congress Chairman Li Zhanshu are the stars of these sessions on paper, mentions of Xi and his leadership were omnipresent in the speeches, press conferences, and state-run media coverage coming out of the event. Indeed, the week’s proceedings left no question that Xi is in charge and commands a cult of personality, which increasingly draws parallels to Mao.

As for the policy shifts, they are in actuality remarkably straightforward and predictable. Their rationale can be summarized in a concept that Li Keqiang referenced 55 times in his work report—maintaining stability.

The Chinese government has long struggled to navigate the twin imperatives of preserving economic and social stability and pushing through structural changes that cause pain in the immediate term but are intended to mitigate systemic risks and enable long-term sustainable growth.

Xi is best known for pursuing the latter, but under his leadership China has followed a fairly well-established pattern of rolling out more difficult reforms (albeit often not the liberal reforms desired by the West) when economic growth is strong and easing off of these reforms when economic and social stability become stressed.

For example, after reporting better-than-expected growth in the first two quarters of 2021, Beijing was in a position to execute harsh regulatory crackdowns in the second half. It finished the year with 8.1% GDP growth on surging demand despite slowing to 4% by the end of the year.

This year is different from 2021 for two reasons. First, China’s leaders face significant domestic and external challenges, spurred by the country’s most widespread COVID-19 outbreaks in two years, the geopolitical and global economic implications of Russia’s invasion and ongoing war in Ukraine, and added pressure on long-standing concerns, such as providing employment for a record number of university graduates and ensuring food and energy security amid global inflation.

In addition, the twice-a-decade Party Congress will be held this fall. The government usually shifts the pendulum toward preserving stability in Party Congress years, as those in power seek to avoid crises rather than make bold decisions that, if unsuccessful, could negatively impact their career prospects.

The stakes are especially high for Xi. If not managed well, this year’s strong headwinds could discredit Xi’s leadership just as he is preparing to cement his hold on power for a precedent-shattering third term.

To be sure, the Communist Party under Xi remains dedicated to economic restructuring. This restructuring—including carbon reduction and regulatory campaigns—will not be entirely absent this year and will remain a long-term fixture of Xi’s “New Era.” It will likely receive even more emphasis during his third term. It is simply being temporarily deemphasized while the government cautiously moves toward the most important event in its five-year political cycle.

Indeed, the legislative session’s emphasis on stability and the temporary shelving of more difficult structural changes is expected during a Party Congress year, and especially one so rife with risks. That this precedent is being followed shows that the government’s top task this year is to ensure that no instability will emerge that will threaten to prevent the Party Congress from going exactly according to Xi’s plan.