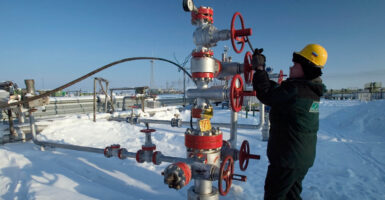 While announcing a ban on Russian oil imports to the U.S. on Tuesday, President Joe Biden acknowledged that oil prices could surge higher and sought to pin the blame on Russian President Vladimir Putin. Pictured: A rigger tends to a piping system of an oil rig of the now-defunct Russian oil company Yukos on Jan. 27, 2004, outside of Nefteyugansk in Siberia. (Photo: Oleg Nikishin/ Getty Images)

Although Russia’s invasion of Ukraine has helped to unify Europe against Russia, it has had a divisive effect in the Middle East, where many countries recently have hedged their bets by boosting ties to Moscow to offset declining confidence in U.S. leadership.

Even before the Biden administration’s Afghanistan withdrawal debacle last August, U.S. allies and partners in the Middle East were dismayed by a downsizing of the U.S. military presence in the region, incessant talk of an American “pivot” to Asia, and the administration’s commitment to restoring the flawed 2015 Iran nuclear agreement.

They rightfully fear that another weak nuclear deal will allow Tehran to pocket billions of dollars and escalate its military and terrorist threats against its neighbors.

These reservations about U.S. policy also have hampered cooperation with regional allies and partners on mitigating the economic impact of Russia’s invasion of Ukraine and the resulting U.S. sanctions on Russia, the world’s second-largest oil exporter after Saudi Arabia.

While announcing the ban on Russian oil imports to the U.S. on Tuesday, President Joe Biden acknowledged that oil prices could surge higher and sought to pin the blame on Russian President Vladimir Putin:

This decision today is not without costs here at home. Putin’s war is already hurting American families at the pump—and this will drive up costs further. So, I will take every step we can to minimize Putin’s price hike here at home.

But Biden’s efforts to lobby for increased oil production from Middle Eastern oil exporters have failed to produce adequate alternatives to the Russian oil.  Washington initially was rebuffed by Saudi Arabia and the United Arab Emirates, the only oil exporters that have significant untapped oil production capacity.

The two countries announced that they were sticking to an oil production agreement struck by the Organization of the Petroleum Exporting Countries and a group of non-OPEC oil producers led by Russia.

The United Arab Emirates later moderated its initial position in a statement released on Wednesday by Ambassador Yousef Al Otaiba: “We favor production increases and will be encouraging OPEC to consider higher production levels.”

This snub of Biden stands in stark contrast to Saudi behavior in 2018, when it ramped up oil exports to stabilize oil prices after then-President Donald Trump withdrew from the Iran nuclear agreement and reimposed sanctions on Iran.

The Saudis and Emiratis feel neglected by the Biden administration, which they assess has failed to adequately respond to mounting threats to their security posed by Iran and its proxy militias.

Both governments were stung by Biden’s criticism of their military intervention in Yemen, the freezing of some U.S. arms sales to their armed forces, and the withdrawal last year of U.S. military forces and missile defenses from their countries at a time when they face rising threats from Iranian drones and missiles, including many launched by Iran’s Houthi allies in Yemen.

The Biden administration also burned its bridges to the crown prince, the de facto ruler of Saudi Arabia. Biden promised during the 2020 presidential campaign to treat the crown prince as a pariah for his role in the 2018 death of journalist Jamal Khashoggi.

The Biden administration’s cold shoulder encouraged the Saudis and Emiratis to hedge their bets on U.S. security guarantees by trying to improve their relations with Russia, China, and even Iran.

Although the Biden administration has been quick to blame Putin for spiking global energy prices, its own flawed energy policies also have contributed to the current energy predicament.

The administration has undermined U.S. energy security in its rush to replace fossil fuels with renewable energy sources that will not be scaling up fast enough to support that transition anytime soon. That trade-off has now become more visible.

The Biden administration’s reported overtures to Venezuelan dictator Nicolas Maduro for increased oil supplies have rightfully raised eyebrows. This objectionable option could have been avoided if the administration had maintained better relations with major Arab oil kingdoms.

The Biden administration needs to recalibrate its Middle East policy to give a higher priority to energy security and the need to deter and defend against a broad spectrum of Iranian threats to regional security.

Perhaps then it could depend on the full cooperation of long-term partners in the Middle East who have harbored increasing doubts about U.S. security guarantees. Maybe then they would even agree to accept a phone call from the White House.