America’s Ruling Class Wants to Reduce Us to Incompetence 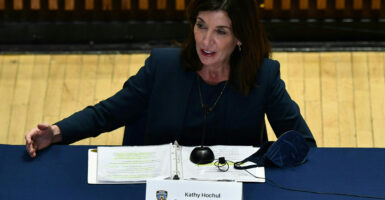 By refusing to state that an actual person acted viciously and illegally in killing a police officer, New York Gov. Kathy Hochul asked us to believe in a lie. Pictured: Hochul speaks Feb. 3 during a meeting of the Gun Violence Strategies Partnership held at New York Police Department headquarters. (Photo: Brendan Smialowski/AFP/Getty Images) 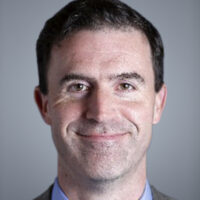 In this strange passive voice, the Democratic governor didn’t mention the officer by name, but concluded that the true threat facing New York City was “the scourge of illegal guns on our streets.”

By refusing to state that an actual person acted viciously and illegally in killing a police officer, Hochul asked us to believe in a lie.

Obviously, that lie’s utility rests in its redefinition of violent crime as a problem stemming from lack of government regulation—in this case, insufficient gun control measures. She wants New Yorkers to ignore the violent crime rate spike in their city, aided and abetted by progressive crime policies.

This framework has undermined the nearly three-decadelong achievement in securing peaceful streets in New York City, a period that began under Mayor Rudy Giuliani, a Republican. Of course, Giuliani chose a law-and-order strategy in which authorities arrested and incarcerated those who chose lawlessness and violence.

Hochul’s logic, though, has deep roots, in our ruling class’ rationalist-scientistic-administrativist approach to the common problems we face as people. These experts disabuse us of the belief that we are free human beings, capable of answering the ethical questions of how we will live together.

Between this question and the confidence we have in ourselves to answer it, the ruling class intervenes, instilling doubt in our basic intuitions of free will and responsibility, and our capacity to live our own lives. They proceed to manage our cares and fears. They diagnose and prescribe cures for our neuroses and instill in us a resigned belief that we really aren’t free to govern our lives without their constant attention.

British cultural critic and psychiatrist Theodore Dalrymple illuminated this approach well in two books of essays titled “Life at the Bottom” and “Our Culture, What’s Left of It” In a classic essay, “The Knife Went In,” Dalrymple describes how the ideas of an academic elite seeped into government institutions and created the conditions for the emergence of an underclass in Britain.

The chief trait of this underclass is a belief in their inability to govern their own lives, Dalrymple notes. They have imbibed what the therapeutic class tells them and become “marionettes of happenstance.” Curiously, this makes them more likely to commit crime and become permanent wards of the state.

This surrender of human freedom, Dalrymple writes, comes about in part because of the therapeutic class—“the legions of helpers and carers, social workers and therapists, whose incomes and careers depend crucially on the supposed incapacity of large numbers of people to fend for themselves.”

And the “psychotherapeutic concepts” of this class of workers have been thoroughly disseminated throughout the populace. This philosophical decomposition of freedom and virtue meets with the self-interest of therapeutic experts, who find their clients in the ghettos of democracy. They mean to make the underclass permanent clients.

Dalrymple, a former British government psychiatrist, frequently found himself treating prisoners. The words they used to describe their crimes evoked passivity and victimhood. They frequently blamed the victims for the crimes they had committed.

But the prisoners always attributed total responsibility to police for any wrongs the coppers had done them. Police officials, unlike criminals, had perfect control of their actions.

Three of Dalrymple’s patients used the phrase “the knife went in.” They saw themselves almost as third parties to their crimes, to which they had been led by poorly understood internal drives or past circumstances.

The will of the attacker was as nothing, Dalrymple wrote, compared to the power of “the inanimate knives themselves, which determined the unfortunate outcome.”

Hochul, New York’s governor, would understand such a self-serving justification.

One prisoner was behind bars for stealing from churches, a crime he nearly had perfected. Churches, he told Dalrymple, have much silver and poor security. And he blamed his crimes on the churches; their lack of security drew him to confiscate their goods.

Another criminal demanded that Dalrymple help him understand why he frequently broke into homes and stole electronic goods. It was his past, he thought.

No, Dalrymple informed him, he did it because he decided to put vice over virtue. But there’s much of that going around lately.

Chicago Mayor Lori Lightfoot, a Democrat, similarly employed this blaming of victims regarding rampant mob theft at retail stores. Why, she inquisitively wondered, do these stores not employ security forces? They almost invite the mobs, otherwise known as thieves, incentivized in their lawlessness by the mayor’s progressive crime policies. Perhaps a youth jobs program, subsidized by taxpayers, would do the trick?

And this situation grows worse with the official explanation of “systemic racism” as the reason why inequality exists between certain minorities and an inherently racist white majority. Asian Americans’ academic and economic achievements go unexplained here.

Crime itself, in this view, is a liberation of the goods from the oppressors to the oppressed, as not a few Black Lives Matters figures have enunciated.

Politicians on the left also have attempted to induce a helpless mentality in the populace at large with COVID-19 restrictions. Rather than accept risk and liberty, large sectors of the government at all levels tried to lead us into impotence, dependent on “science” and the imprimatur of public health types regarding vaccines, vaccine cards, booster shots, and masks before we could leave our homes, go to work, or attend a sporting event.

The good news is that liberals’ COVID-19 regimes, their attempt to reduce us to subjects rather than citizens, seem to be failing. Something in the middle class in America resisted the narrative that they should become victim serfs, holding their breath for the government to relieve them from the stress of living.

Much work remains, though, if we are not to be reduced to incompetence. A key theme in the vast network of progressive policies is to remove us from voluntary life in civil society and ensconce us in their state-directed network of living.

Energy will be a government-created good, delivered to us at bureaucrats’ price. Education will become even more centralized with a curriculum devoted to regime goals of identity politics and sexual liberation.

Our speech and other activities in civil society will be under the thumb of a tech and administrative state consortium whose directives we will learn to obey or watch our access to this social media network be removed. A vast welfare, state that subsidizes those who don’t work will ensure that economic freedom diminishes and the soft despotism of dependency grows deep roots in our mores.

It doesn’t require a great work of imagination to see such a future take hold and define America.

The other route is to recover the ground of citizenship, which begins with our freedom and our virtue and their rootedness in an eternal order of right, or what John Adams referred to as the “revolution principles.”

Some, apparently, need a refresher course. It’s our job to see that they get it.