A Slip of Tongue on Abortion at Supreme Court? 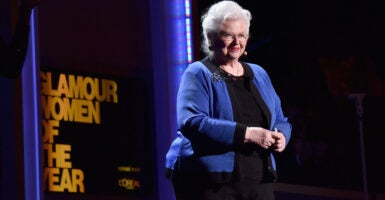 Sarah Weddington—seen here onstage at Glamour magazine's 2017 Women of the Year Awards on Nov. 13, 2017, in Brooklyn, New York—went to great linguistic lengths to deny the personhood of the unborn when she argued for abortion rights before the Supreme Court in Roe v. Wade 45 years earlier in 1972. (Photo: Bryan Bedder/Getty Images)

When lawyer Sarah Weddington stood up in the Supreme Court on Oct. 11, 1972, to present the pro-abortion argument in the case of Roe v. Wade, she was legalistically careful in the language she used to describe whom exactly an abortion aborted.

Presumably, this was because the 14th Amendment states, “nor shall any state deprive any person of life, liberty, or property, without due process of law; nor deny to any person within its jurisdiction the equal protection of the laws.”

Justice Byron White, one of only two justices who would end up dissenting from the court’s opinion that there was a “right” to abortion, pushed Weddington on the precise question of whether the unborn children killed by abortions were in fact people.

“Several of the briefs before this Court would also argue that this Court, in deciding the Vuitch case, which has allowed abortions to continue in the District of Columbia, certainly the Court would not have made that kind of decision if it felt there were any ingrained rights of the fetus within the Constitution,” Weddington told the court.

After she said that, White engaged her in a pointed line of questioning. “Is it critical to your case that the fetus not be a person under the due process clause?” asked the justice, who had been nominated by President John F. Kennedy.

“It seems to me,” Weddington said, “that it is critical first that we prove this is a fundamental interest on behalf of the woman, that it is a constitutional right, and, second … .”

White interrupted her. “Yes, but how about the fetus?” he asked.

White persisted. “Yes, but I’m just asking you, under the federal Constitution, is the fetus a person for the purpose of the protection of the due process clause?”

“All of the cases, the prior history of this statute, the common law history, would indicate that it is not,” said Weddington. “The state has shown no … .”

White interrupted her again. “Well,” he said, “what if … Would you lose your case if the fetus was a person?”

“Then you would have a balancing of interests,” Weddington responded.

“You have anyway, don’t you?” said White.

A moment later, however, she conceded that the situation might be different if the state could establish that a fetus was a person. “If the state could show that the fetus was a person under the 14th Amendment or under some other amendment or part of the Constitution, then you would have … a state compelling interest which, in some instances, can outweigh a fundamental right,” she said.

“This is not the case in this particular situation,” she claimed.

In December, the Supreme Court heard oral arguments in Dobbs v. Jackson Women’s Health Organization, a case that challenges the constitutionality of a Mississippi law that bans most abortions after 15 weeks of pregnancy.

The Biden administration opposes the Mississippi law. Solicitor General Elizabeth Prelogar participated in the oral arguments against it that were presented in the Supreme Court.

Justice Clarence Thomas confronted her with a fundamental question.

“The court has never revoked a right that is so fundamental to so many Americans and so central to their ability to participate fully and equally in society,” Prelogar said in her argument. “The court should not overrule this central component of women’s liberty.”

“General,” Thomas asked her, “would you … specifically state what the right is? Is it specifically abortion? Is it liberty? Is it autonomy? Is it privacy?”

Prelogar, in responding, was not as circumspect as Weddington had been in the terminology she used to describe the target of an abortion.

“The right is grounded in the liberty component of the 14th Amendment, Justice Thomas,” she said, “but I think it promotes interest in autonomy, bodily integrity, liberty, and equality. And I do think that it is specifically the right to abortion here, the right of a woman to be able to control, without the state forcing her to continue a pregnancy, whether to carry that baby to term.”

So, the target of an abortion, according to the argument President Joe Biden’s solicitor general made in the Supreme Court, is “that baby.”