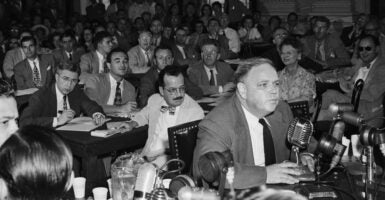 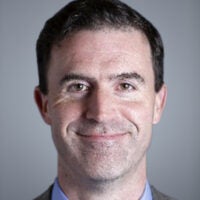 Chambers’ resounding verdict is that communist ideology corrupts the souls of its adherents, justifying violence to achieve ideological resolution of the total crisis of the modern world.

A spy for Soviet military intelligence during the 1930s, Chambers would build a communist espionage ring in Washington, D.C., with numerous journalists and officials ensconced in the federal government during the New Deal.

Members of this cell transferred to Chambers copies of government documents, reports, and plans. He then relayed this material to the Soviet Union’s intelligence handlers.

Chambers would exit communism in 1938 after a profound Christian conversion heightened his awareness of how the communist ideology persecuted and destroyed the human spirit.

Chambers’ spy network consisted of men such as Harry Dexter White, a senior Treasury Department official who would be appointed in 1946 as U.S. director of the International Monetary Fund.

Another prominent member was Alger Hiss. A graduate of Harvard Law School, Hiss clerked for Supreme Court Justice Oliver Wendell Holmes. He served in an array of federal government posts; at the State Department, he was part of America’s Yalta delegation.

As members of a communist cell, Chambers and Hiss became close friends, their families frequently socializing together. When Chambers left communism, he tried to bring Hiss with him in a fateful Christmas visit in 1937. But to no avail, as Hiss was firmly committed to the revolutionary cause.

That fact would remain true for Hiss’s entire life. He died in 1996, never admitting that he engaged in espionage and insisting that he was framed by Chambers.

On Jan. 21, 1950, after almost two years of hearings, lawsuits, and two federal trials—the first ended in a mistrial—Alger Hiss was pronounced guilty on two counts of perjury about espionage. He was sentenced to five years in federal prison.

Hiss had lied about his efforts to aid the Soviet Union while a high-ranking State Department official in the 1930s. Chambers’ testimony against Hiss—first in front of the House Committee on Un-American Activities in 1948, and then in federal court—became impossible to reject because of the legendary evidence he hid in a pumpkin patch on his farm.

The so-called Pumpkin Papers, actually on microfilm, provided evidence proving that Hiss had in fact procured State Department documents and delivered them to Chambers.

The Hiss-Chambers trial was a national sensation. The first installment of now familiar episodic clashes in America’s cultural wars, the trial unlocked for Americans the degree of past communist penetration of the federal government.

But the case means more than a progressive left that refused to admit Hiss’s guilt (which remained true for decades) and an anti-communist right that wanted justice for Hiss’s betrayal of the country.

Chambers’ turn against communism also was sparked by his acute awareness of the Stalinist purges in the Soviet Union. Those murders spoke to a new reality Chambers accepted—the existence of the soul.

The scientific rationalism he believed in as a communist “fell from me like dirty rags,” Chambers wrote, along with “the whole web of the materialist modern mind.” This materialism had stifled human spirit, “paralyzing in the name of rationalism the instinct of his soul for God.”

Why do men break from communism, Chambers asked in “Witness”?

They rarely break completely, retaining their faith in the needed emancipation of man from traditional institutions of property, religion, and family. Most pull away from communism, not because of disagreement with the destination of egalitarianism or elimination of capitalism, but over tactics and strategy. They aren’t ready to take upon themselves the crimes of history.

But what replaces communism isn’t a new vision or the return to the West’s ancient faith in God and reason, but various forms of leftist thought, less violent or anti-democratic in operation.

Chambers described his process of leaving communism as a root-and-branch spiritual conversion, embracing the love and grace of a providential God. Chambers believed God called him to “fight for freedom.” If he did this, God had told him, “all will be well.”

The first stirring inside Chambers, he wrote, began the day he noticed the shape of his daughter’s ear. She was so amazingly made, he observed, that he saw the finger of God in his daughter’s creation.

Communism’s materialist vision of man had lost its hold on him.

Chambers also reported that he left communism because he finally heard the screams of those tormented, persecuted, and murdered by the ideology. But to acknowledge the depth and meaning of their screams, he concluded, was to hear their souls with your own soul.

In this, Chambers departed from the murderous realm of Soviet communism, where the crimes of history were easily justifiable so that an end to history could be reached and man’s liberation achieved.

One of Chambers’ memorable statements in “Witness” is this: “A Communist breaks because he must choose at last between irreconcilable opposites—God or Man, Soul or Mind, Freedom or Communism.”

To believe in man’s essential dignity was to have an answer to Vladimir Lenin’s or Joseph Stalin’s argument that ideological murders were justified. No, says Chambers, the soul is created by God and marks man as an immortal who cannot be destroyed for communist ideology.

Chambers told his wife that in leaving communism, “we are leaving the winning world for the losing world.” We made “the decision to die, if necessary, rather than to live under communism.”

Some do not know that there was a time in the 20th century that communism seemed ascendant, both morally and technologically. Chambers never was sure that the West was prepared to defeat it.

Communism had proven fulfilling to leading minds because it gave them a reason to live and a reason to die. That faith was found in Karl Marx’s counsel—“Philosophers have explained the world: it is necessary to change the world.”

According to Chambers, the conviction of the communist and the fellow traveler was this powerful belief: “Communists are that part of mankind which has recovered the power to live or die.”

But this was also why Chambers thought Hiss refused to admit guilt or express remorse for his treasonous behavior. Chambers had owned up to his betrayal of his country because he knew it was wrong; it was a betrayal of everything that a man should hold sacred. Hiss was loyal to an ideology and to the Soviet state.

The controversy between Hiss and Chambers revealed a sharply divided America. When subpoenaed to testify by House Un-American Activities Committee in 1948, Chambers was a senior editor at Time magazine, then a serious weekly periodical on politics and culture.

Chambers would lose that job and be vilified in the press. Leading politicians and Supreme Court justices, including President Harry Truman’s Secretary of State Dean Acheson, publicly defended Hiss.

Chambers’ verdict on this abusive treatment was that when he took up his sling and struck Hiss, he also struck Goliath:

What I hit was the forces of that great socialist revolution, which, in the name of liberalism, spasmodically, incompletely, somewhat formlessly, but always in the same direction, has been inching its ice cap over the nation for two decades.

Chambers makes a radical judgment about the shape of President Franklin Roosevelt’s New Deal, as its main architects had as their goal the remaking of America, the replacement of business with politics.

Would Americans now realize how deep the transformation could go, courtesy of Chambers? Did not the viciousness toward Chambers betray something about progressive goals, as in how dare anyone question the efforts of one of the progressive cohort?

Chambers stridently argued that communists, socialists, and progressives really couldn’t grasp “the differences between themselves.” An accusation that Hiss was a communist struck many progressives as an attack upon them because he was of their circles. How could a Soviet agent share their purposes?

Chambers answered by pointing to the rationalism of the modern liberal project, which believed that man’s mind could constitute and change man’s reality. The spirit of this vision moved in tandem with the communist faith.

The progressive shared the communist position that replaced right and wrong, good and evil, with “the morally corrupting distinction between ’progress’ and ‘reaction,’” as Dan Mahoney articulates.

Chambers’ “Witness” argued that he was fighting for Western political freedom, but that freedom could not be defended by modern liberalism. Freedom, Chambers said, “is a need of the soul.” In “striving toward God,” he wrote, the “soul strives continually after a condition of freedom.”

But our freedom demands inner freedom. Thus, Chambers wrote, “political freedom, as the Western world has known it, is only a political reading of the Bible.”

In the end, that’s what Chambers’ “Witness” stands for, the freedom of our souls to choose the good and to reject the train wreck of ideological lies that have flooded the modern mind.

This is counsel we need in our time, as the dehumanizing ideologies of the left continue to arrest people’s souls.