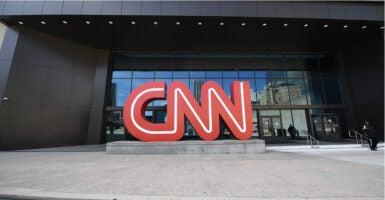 How did corporate media become so biased and corrupt, and why isn’t it being held accountable?

She is optimistic because “a lot of people have lost trust in corporate media in recent years, [and] that’s a good thing,” Hemingway says. “It’s bad if people believe the propaganda.”

Hemingway joins “The Daily Signal Podcast” to discuss the state of the media today and to share her reaction to President Joe Biden’s nomination of Judge Ketanji Brown Jackson to the Supreme Court.

Also on today’s show, Rep. Mark Green, R-Tenn., explains what he saw in Ukraine a week before Russia invaded.

We also cover Biden’s first State of the Union address.

Mary Margaret Olohan: My guest today is Mollie Hemingway, the editor-in-chief of The Federalist. Mollie, thank you so much for joining us today.

Mollie Hemingway: It is great to be here with you.

Olohan: So Mollie, you have been one of the most prolific critics I have ever seen of the media’s misrepresentation of the news. I’d love if you could share with us, what are some of the most egregious lies that you have seen spread by the media?

Hemingway: Well, first off, I remember that this is something I’ve been interested in since I was literally a child. I remember reading—I lived in a town that had two newspapers and you would compare how those two newspapers covered events. And I became aware at a very early age about the power the media have to shape narratives and to shape the way you think about things. So this is a problem we’ve had for decades.

And you think about how many Republican presidents have complained about media bias. It goes back to literally [President Dwight D.] Eisenhower. But what we’re in right now is something altogether much worse and much different, and just an overt propaganda environment, where we have a corporate media that make up stories that use sources that they never should be using and who also hide stories that are harmful to their political goals.

So, there are many stories in recent years that have been really bad. Obviously, the Russia collusion hoax that they completely perpetrated for years and was made out of nothing, using sources they never should have used, all in an effort to destroy a political person they did not like and a political movement they didn’t like.

Also, I would say the [Brett] Kavanaugh smear, that was one of the most horrific things I’ve ever witnessed. And I wrote a book on it with Carrie Severino about that confirmation. And they, again, went with a story that never should have been made public. And they pushed narratives that were false, all to destroy a person because really, they just wanted to shape what the Supreme Court was like.

Olohan: What about when someone like Hunter Biden actually has an insane scandal and the media just ignores it or doesn’t allow the story to be told?

Hemingway: Right. I love how we lived through this Trump era where the children of the president were lambasted all the time. And then you have an actual crack addict for the son of our current president, who’s been engaged in all sorts of financial dealings with corrupt oligarchs and the Chinese communist government. We have policies that clearly seem to have been shaped by some of these relationships, whether it’s in Ukraine, China, Russia.

And the media suddenly, the corporate media have no interest in covering this, even though it’s a dramatic story. I mean, it has all the elements that you know that they would’ve just salivated over had it been an opposing party—the sex, the drugs, the insanity. But no, all of a sudden now they’re showing a great deal of restraint. And I think it’s—

Hemingway: Well, I think there are many problems that go into this. One thing is that I call them corporate media in part because they are so well funded by corporations. They exist to support corrupt regimes and they do a great job doing it and corporations pay them for that. So the financing issue is huge.

And if you believe in a free and fair press, which is actually really important for our system of government—you look at the Founders, they talked at length about the need for a free and fair press to hold people accountable. We do not have that in the corporate press, but we do have other outlets that are doing a good job of reporting actual news based on facts instead of narrative-pushing and those need to be funded.

So that’s an important issue.

Also, one thing that I’m really optimistic about is a lot of people have lost trust in corporate media in recent years—that’s a good thing. It’s bad if people believe the propaganda that’s coming.

You look at the numbers for corporate press and they are just off a cliff. It’s like 9% of Republicans have any confidence at all, whatsoever in the media and the left isn’t really that much believing them also.

That needs to continue and I think that in this regard, a lot of Republican politicians do a lot to prop up this corrupt press. They treat them as if they’re reasonable, instead of as their primary political opponents.

So I would say that any conservative politician who does not believe that it is his job or her job to go to war with these people who are destroying the country does not deserve to be in office.

Olohan: Well, I would love to talk more about your book on the Kavanaugh hearings, because this is something that actually caused me to go into journalism. I was so radicalized by this whole experience. We have another Supreme Court confirmation coming up. Do you have any insights on how this will all play out, what kind of confirmation process we might see?

Hemingway: This is another disparity you see between parties. So, Carrie Severino and I wrote “Justice on Trial.” And we go through the history, not just with the Kavanaugh confirmation, but all the recent nominations, really it’s sort of like a lot of history from the ’70s on.

So you do not see these types of harsh battles on the right, in part, because the right doesn’t seem to fight as well as the left does, or they aren’t willing to brazenly accuse someone of a crime they didn’t commit, like serial gang rape.

In this case, I think that the good thing to remember, and that all Americans should remember, is who controls the Senate really dictates what happens with these nominations. I think Clarence Thomas was the last nominee to get confirmed by a Senate controlled by a different party than the party that was nominating.

So it’s a bad show of cards here. We’ve got 50 Democrats, but they control the Senate. And then you have a ton of weak Republicans who will probably go along with it, lest they be accused of being meanies.

Even though now that we have the nominee, we know—which we knew no matter who the nominee was—that she’s incredibly radical partisan, that she has engaged in pretty extreme rulings from the bench and she is a hardcore activist.

Olohan: Well, a final question for you. This one’s a little bit off-topic, but it’s about Ukraine. I have seen a lot of media and Democrats suggesting that all these Republicans and commentators are siding with [Russian President Vladimir] Putin. Have you seen anything about that?

Hemingway: Oh my gosh. It’s infuriating to me. The first job of anyone in foreign policy should be to understand the positions of the key players. Understanding the position of a player does not in any way mean you’re endorsing that person. And in fact, particularly if you oppose Putin, you need to understand where he is coming from.

What I think is actually happening when people displace, they say, “Oh, by articulating the complexity of the situation, or by articulating how our foreign policy helped contribute to it, you’re siding with Putin.” What they’re trying to do is avoid responsibility for what they did.

The fact is, I mean, you look at what Putin has done across the last four presidents, he made incursions when George W. Bush was weak with his distraction in the Iraq War, when [Barack] Obama and [Joe] Biden were in office the first time, and now again with Biden in office.

The one exception is the Trump presidency. And that was because that was the one time we had a different foreign policy, where we believed [in] strengthening this country, having energy independence, focusing on China instead of being distracted with never-ending wars in other places, and really encouraging the NATO alliance to be strong against Russia—meaning the countries within NATO needed to step up and handle their defense far more, particularly with what’s going on with China.

So these people just don’t want to deal with the reality that their foreign policy helped contribute to this absolute disaster situation. And that doesn’t mean that you support the problem just because you accurately identify what the problem is.

Olohan: Super-interesting. Well, Mollie, thank you so much for joining us. We’re so grateful for your insights.

Hemingway: Thank you very much. Great seeing you.