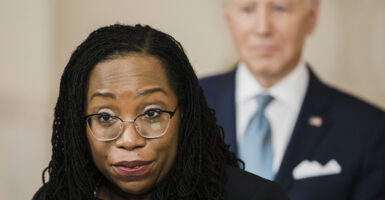 Let's recount a bit of history on how the Democrats have treated minorities and women nominated to federal judgeships by Republican presidents. Pictured: Judge Ketanji Brown Jackson delivers remarks Feb. 25 at the White House on her nomination by President Joe Biden to serve on the Supreme Court. (Photo: Kent Nishimura/Los Angeles Times/Getty Images)

Even before Judge Ketanji Brown Jackson’s nomination to the Supreme Court, prominent Democrats began accusing Republican senators of being racists and misogynists for daring to question, for example, the pledge that President Joe Biden made as a candidate to nominate a black woman to the high court if elected.

Sen. Elizabeth Warren, D-Mass., said such questions demonstrate that the Republican Party has moved on from “racial dog whistles and gone directly to racial sirens.”

Senate Judiciary Chairman Dick Durbin, D-Ill., said: “Some of the people who are speaking the loudest about not choosing a black woman have never voted for a black nominee.”

On the House side, Rep. Hank Johnson, D-Ga., said Republican statements about Biden’s resort to identity politics for this nomination were “the racist dog-whistle that everyone hears.”

Not to be outdone, Rep. Hakeem Jeffries, D-N.Y., chairman of the Democratic Caucus, said: “These people are phonies, and they continue to try to divide America by engaging racially inflammatory and unnecessary rhetoric.”

No doubt this drumbeat will continue and grow louder as the date of Jackson’s confirmation hearing in the Senate nears. To be sure, Republican senators are going to have to be careful about how they approach this nominee, but that doesn’t mean they should buy into that narrative. Not. One. Bit.

Let’s recount a bit of confirmation history on how the Democrats have treated minorities and women who were nominated to federal judgeships by Republican presidents.

In March 1990, when he was chairman of the Senate Judiciary Committee, Sen. Joe Biden. D-Del., voted to confirm Clarence Thomas’ nomination to the U.S. Court of Appeals for the D.C. Circuit, the court where Jackson now sits.

But during Thomas’ confirmation hearing, and somewhat bizarrely since he had not been nominated to the Supreme Court, Biden warned Thomas that in his opinion, different standards apply to Supreme Court nominees than apply to lower court nominees. Biden stated:

And sure enough, a year and a half later, in October 1991, Biden voted against confirming Thomas to the Supreme Court, along with 46 other Senate Democrats. Thomas ultimately was confirmed, making him only the second African American to serve on the high court.

In 2003, Biden voted twice to filibuster the nomination of Judge Janice Rogers Brown to the D.C. Circuit at a time when she was considered a possible replacement for Supreme Court Justice Sandra Day O’Connor.

Brown was the granddaughter and daughter of sharecroppers who rose from poverty in rural Alabama during the segregation era to put herself through law school as a working single mother. She eventually was appointed to the California Supreme Court.

When Brown was prominently mentioned as a potential replacement for O’Connor, Biden went on TV as a senator and said: “I can assure you that would be a very, very, very difficult fight and she probably would be filibustered.”

Since the Senate filibuster still existed for judicial nominees at that time, this was likely the death knell to any hope Brown might have had to be nominated to the Supreme Court. Of course, had she been nominated and confirmed, Brown would have been the first African American woman to serve on the Supreme Court, something that President Biden now says is “long overdue.”

In 2003, Biden voted six times (see here, here, here, here, here, and here) to filibuster the nomination of Miguel Estrada to the D.C. Circuit, a tactic that ultimately succeeded in killing his nomination. Many Democrats who are still in the Senate joined Biden in each of these votes.

Estrada would have been the first Hispanic to join the D.C. Circuit. According to internal strategy memos, the Democrats viewed him as “especially dangerous” because “he is Latino, and the White House seems to be grooming him for a Supreme Court appointment.”

The Democrats clearly did not want a Republican president appointing the first Hispanic to the Supreme Court.

More recently, President Donald Trump appointed women to seven of the 12 circuit courts. He also appointed the first Asian Americans ever to serve on the 5th and 6th Circuits.

Then-Senate Minority Leader Chuck Schumer and the Democrats voted to filibuster every one of those Trump nominees and then voted against their confirmation.

All told, Schumer voted against 20 of the 21 women and minorities nominated by Trump to federal appellate court positions (congratulations to Amy St. Eve on being the sole exception).

What about then-Sen. Kamala Harris? The California Democrat didn’t vote on seven nominees and voted against 13 of the remaining 14.

The record of other Senate Democrats wasn’t much better (and in some cases, it was worse).

Republicans who are accused of being racists and misogynists when it comes to questioning Jackson in the run-up to and during her Senate confirmation hearing should not hesitate to recount this history.

The sound you hear may be racial dog whistles, but you should look carefully to see who is doing the blowing.