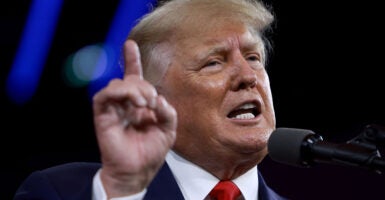 “I stand as the only president of the 21st century on whose watch Russia did not invade another country,” says former President Donald Trump during the Conservative Political Action Conference in Orlando, Florida. (Photo: Joe Raedle/Getty Images)

What are the most important issues facing Americans today? How should we respond to Russia’s invasion of Ukraine? How is President Joe Biden’s term going so far?

The Daily Signal team attended the Conservative Political Action Conference, held Feb. 24-27 in Orlando, Florida. There we interviewed dozens of top conservative newsmakers, including lawmakers and former White House officials, getting their insights on the pandemic, the Jan. 6 committee, critical race theory, and much more.

Check out some of our interview and speech coverage highlights below. And if you want to watch all the interviews, check out our Rumble or YouTube Daily Signal channels.

The January 6th Committee was created with the purpose of investigating the riot at the Capitol and preventing something like it from ever happening again. But Rep. Jim Jordan, R-Ohio, says that the committee has abandoned that job in favor of trying to “get” former President Donald Trump.

“It’s totally out to get President Trump,” Jordan said. “I mean, just the simple fact that for the first time in American history, the minority leader was not allowed to put on a select committee the individuals he or she selected. It’s never happened in our history.”—Doug Blair

“I’m supporting legislation that would say, look, if you’re going to send these people someplace, send them to Martha’s Vineyards, send them to San Francisco. Because the reality is, until those people who are so far from the border they don’t seem to feel it start feeling it, they’re not going to do anything,” says Biggs.

Former Secretary of State Mike Pompeo, also CIA director under Trump and a representative of Kansas in the House for six years, said in his speech at the Conservative Political Action Conference that the Trump administration followed the model of former President Ronald Reagan’s leadership on the international stage to counter Soviet aggression.

“We’ve seen a Russian dictator now terrorize the Ukrainian people because America didn’t demonstrate the resolve that we did for the four years prior,” Pompeo said.

The former secretary of state recalled what the left said of the Trump administration’s foreign policy—and contrasted it with the chaos on the world stage today.

“I remember we were the barbarians, we were the rubes,” Pompeo said. “We didn’t know what we were doing. We look pretty competent now. I say that not in joy but in sorrow, because America demands good leadership and the world is depending on it.”—Fred Lucas

The Indiana congressman weighed in on Russia’s invasion of Ukraine during a Friday interview with The Daily Signal, critiquing Biden’s “weak” sanctions of Russia thus far.

Banks suggests naming Russia as a state sponsor of terrorism for “helping Hezbollah and a lot of our other enemies.”

The Indiana congressman said that he believes the Biden administration’s withdrawal of U.S. troops from Afghanistan contributed to the present crisis, telling The Daily Signal, “I served in Afghanistan. It still makes me sick to my stomach what happened last summer.”

“Truly, a debacle that caused so much embarrassment for America on the world stage,” he added, “and make no mistake about it, Putin was waiting for a moment like this. He was waiting for a weak American president.”—Mary Margaret Olohan

Peter McCullough, a cardiologist from Dallas, explains how he advocates treating COVID-19 and discusses the calls for censorship podcast host Joe Rogan faced after interviewing him.

“It’s been two years and finally the [Centers for Disease Control and Prevention] has its first little monogram cartoon out that says, ‘Treat the virus early.’ Two years,” says McCullough. “Now, I’ve been saying that from the very beginning, and it’s not uncommon for doctors to be years ahead of society’s guidelines and other bodies.”

Hogan Gidley, formerly the White House deputy press secretary during the Trump administration, recalled what it was like to monitor media during Trump’s term.

“Every single day it … seemed to be their design to take down the president and we know that because of a three-and-a-half-yearlong real witch hunt … on a fake issue of Russia collusion,” says Gidley, now director of the Center for Election Integrity at the America First Policy Institute.

“Every time the president opened his mouth, they attacked him for whatever reason. You compare and contrast that with what they’re doing to Joe Biden and they cover for everything he does,” Gidley adds.

7. Trump: If I Was President, Russia’s Invasion of Ukraine, a ‘Horrific Disaster,’ Wouldn’t Have Happened

“As everyone understands, this horrific disaster would never have happened if our election was not rigged, and if I was the president,” Trump said Saturday night at the Conservative Political Action Conference. “Very simple: It wouldn’t have happened.”

On Friday, a Harvard/Harris poll said that 62% believed Russia would not have invaded Ukraine if Trump still held the residency, while 38% said Putin would have invaded even if Trump was still president.

“I stand as the only president of the 21st century on whose watch Russia did not invade another country,” Trump told the supportive crowd.—Fred Lucas

Rep. Ted Budd, R-N.C., spoke about why he was advocating rural hospitals facing staffing shortages not be forced to implement a vaccine mandate for their employees.

“But nowhere in the Constitution does it allow for a mandate that someone should be vaccinated. I believe it’s absolutely against individuals’ right to life, liberty, and their pursuit of happiness,” the North Carolina congressman said.

“So we can’t allow the Constitution to be violated in search of public health,” he added.

Seattle radio host Jason Rantz, who also contributes to The Daily Signal, described Portland and Seattle as looking like a “hellscape.”

“You’ve got graffiti all over the place, which just doesn’t feel good to live in that kind of area anymore. And unfortunately, things seem to be getting worse before they’re getting better,” he added.

Nigel Farage, a British politician-turned-broadcaster, warned about the possibly of Russian and China becoming closer.

“But if we don’t defend the integrity of NATO now, and that means Poland and Estonia, we don’t defend that now, then the West is finished,” Farage added. “As a cohesive unit, it will give great encouragement to China to do what the hell they want. And the truth of it is that NATO is nothing without America. Nothing.”

11. Michele Tafoya Discusses Being Courageous Enough to Speak Out

Tafoya, who retired from NBC’s “Sunday Night Football” after this year’s Super Bowl, said she wanted to add her voice to a world that needs more courage to speak out without fear of intimidation or retaliation.

“I just want people to know it’s OK to be yourself and speak your values and live your values, and not apologize,” Tafoya said in an interview with Matt Schlapp, chairman of the American Conservative Union, which sponsors the annual conference.

Tafoya said she thinks people have the ability to decide whether or not to be offended by what another person says.

“If you disagree with me, disagree with me. But if you decide you’re going to be pained by it or aggrieved by it, that’s you making that choice,” she said. “You get to choose how you respond to everything in the world.”—Maggie Hronich

“There’s been two priorities this administration has announced, as far as I can tell. One is to go after parents of school boards and the other is to prioritize airline passenger assaults,” said Whitaker.

“It’s like they aren’t attached to the real world where we are seeing a huge spike in violent crime,” he added. “You cannot deny that. You’re seeing weak local prosecutors let out violent criminals.”

Whitaker also criticized the Biden administration’s approach to the border.

“We stood for enforcing our nation’s laws, including at the border,” he said. “The number of people that have been released into the United States of America after illegally crossing is in the hundreds of thousands every month.”

Paxton is in the middle of a battle to protect children from a radical left that wants to corrupt them.

In Sen. Marco Rubio’s view, although Marxism is everywhere, many Americans don’t even realize they’re being influenced by it.

“Marxism is a lot more than an economic theory. Marxism is a viewpoint. It’s a philosophy, and at the core of that philosophy is that … there are a handful of people that know what is good and what is right, and they’re smarter and better than everybody else,” the Florida Republican said. “Marxists lie. And the reason why they lie is because if they told you who they were, you would never let them get where they want to get.”

One of the results of Marxism infiltrating America, Rubio argued, is the “speech code” and the “digital mobs” that try to ruin the lives of people whose speech they don’t like.

“It didn’t matter if you’re 13 years old when you said it—you’re one word, you’re one statement, you’re one retweet, you’re one ‘like’ away from destroying your life,” Rubio said.—Maggie Hronich