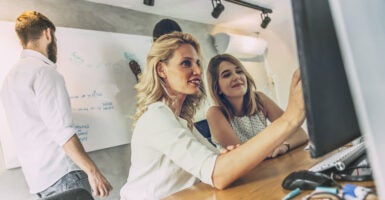 Equal pay is the law of the land. Women do not need the government to intervene on their behalf, they need a reduction of government to be free to pursue the life that they want. (Photo: nd3000/Getty Images)

“Women earn 82 cents for every dollar that a man earns” is a phrase we hear often reverberated from the left. There are rallies with signs, graphics on social media, and countless columns arguing for equal pay for women using this slogan. This must mean that women need the government to intervene on our behalf, right?

Pay discrimination on the basis of sex is already illegal. According to the Equal Pay Act of 1963:

Equal pay is the law of the land. As it should be.

Furthermore, this 82-cent statistic doesn’t compare a man and woman in the same job. This number compares the median earnings of full-time working men to full-time working women. What it does not take into account are different fields of study, different hours worked, risk level of jobs, and life choices that people make.

Some fields compensate people significantly more to work longer hours. This leads some careers to become male-dominated, as men respond to the incentive to work more. According to an article in Harvard Magazine, “Non-linear compensation prevails in the corporate sector, finance, and law, where employees are incentivized to work double or triple a traditional full-time schedule, because their time is better compensated per hour when they work longer hours.”

Men overwhelmingly dominate the field of law, which illustrates the idea of non-linear compensation. With research showing that on average men work longer hours and work jobs that compensate more based on longer hours, the gap in pay is a natural side effect.

College major and career field make a big difference in pay. Women often choose majors and go into jobs that allow for more flexibility but are lower paying. Women make up 76% of public school teachers, according to a report published by the National Center for Education Statistics.

When factors such as education, career field, flexibility of their jobs, and the hours that are worked are taken into account, the wage gap shrinks to 6.6%, says Carrie Lukas, the president of the Independent Women’s Forum. This 6.6% is left unexplained, Lukas says, and there could be myriad causes that could lead to it—not necessarily sexism in the workplace.

Other studies show an even slimmer gap when controlled for job choices. A 2020 Payscale.com analysis found that the pay gap declined from 19% to 2% after controlling for different choices men and women make.

Today’s society has conditioned us to believe that success is an equal number of women in every facet of life or parity. And that the government needs to intervene to make this happen. However, this definition is not what proves to be the most desired. A true definition should be equality of opportunity rather than equality of outcome.

The modern feminist movement champions women and their ability to think for themselves and make decisions for themselves. But if they want to show this in practice, then they have to realize that some women will think differently and make different choices than men, which will influence outcomes.

Some women choose certain fields or jobs that may pay less for other benefits, like increased flexibility. Women do not need the government to intervene on their behalf, they need a reduction of government to be free to pursue the life that they want.