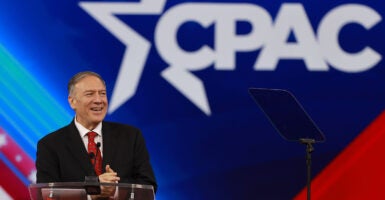 “We’ve seen a Russian dictator now terrorize the Ukrainian people because America didn’t demonstrate the resolve that we did for the four years prior,” former Secretary of State Mike Pompeo says Friday in a speech to the Conservative Political Action Conference in Orlando, Florida. (Photo: Joe Raedle/Getty Images)

As an Army officer, Mike Pompeo was part of a unit guarding a European ally against Russian forces—a circumstance he says is reoccurring with U.S. troops stationed in the Baltic states and Germany now.

“We see on our TV the bombs, the missiles, the Soviet tanks—the Russian tanks—moving across Ukraine,” Pompeo, secretary of state under President Donald Trump, said Friday in a speech at the Conservative Political Action Conference in Orlando, Florida.

“My first assignment when I was a young lieutenant, was when I was in a border unit patrolling [what was] then the East German border, [and it] was the last time we had Americans in Europe standing face-to-face with the Russians,” Pompeo told the CPAC audience.

“How did we prevail? It was peace through strength. It was Reagan’s model that we used for four years in the Trump administration. We put America first and we told people around the world, ‘You cannot tread on us.’”

Pompeo, also CIA director under Trump and a representative of Kansas in the House for six years, said the Trump administration followed the model of President Ronald Reagan’s leadership on the international stage to counter Soviet aggression.

“We’ve seen a Russian dictator now terrorize the Ukrainian people because America didn’t demonstrate the resolve that we did for the four years prior,” Pompeo said.

The former secretary of state recalled what the left said of the Trump administration’s foreign policy—and contrasted it with the chaos on the world stage today.

“I remember we were the barbarians, we were the rubes,” Pompeo said. “We didn’t know what we were doing. We look pretty competent now. I say that not in joy but in sorrow, because America demands good leadership and the world is depending on it.”

He said China poses the biggest challenge to the United States and the Trump administration realized that the long-standing bipartisan view was inaccurate. The communist regime would not become a better actor and a U.S. ally simply because of trade with the United States.

“What happens in Beijing does not stay in Beijing. It’s why I made the decision to close the Chinese consulate in Houston, Texas,” Pompeo said, adding:

You should know that did not make me any friends at the United States Department of State. You should also know that I didn’t really give a rip. We made the decision because of the way they were operating one of the largest spy rings out of that very consulate. They were stealing secrets from the University of Texas medical system and our energy companies. It was intolerable and we just said no, we’re not going to take it anymore.

“Today they are inside our colleges and universities. They are working on our local governments and mayors and governors,” Pompeo said, adding: