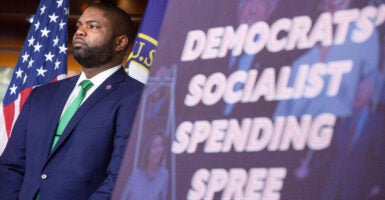 "America has woken up and we realize that we are not going down a socialist road," Rep. Byron Donalds, R-Fla., says at the Conservative Political Action Conference. Pictured: Donalds joins other House Republicans for a Nov. 2 press conference on Democrats' spending package. (Photo: Allison Shelley/Getty Images)

The warnings about creeping socialism appear to be true, Rep. Byron Donalds says, invoking politicians on the far left such as Sen. Bernie Sanders and Rep. Alexandria Ocasio-Cortez.

“In 2020, when we were telling the world that the radical Democrats believed in socialism, the media said we were lying. They said it was a joke. They thought it was a game,” Donalds, R-Fla., said Friday in a speech to the Conservative Political Action Conference in Orlando, Florida.

“The Democrats did what they always do. They said that we are gaslighting the American people.”

Look what they actually did when they took over. The American Rescue Plan has unleashed an inflation on our shores unlike we have ever seen in a generation in America. They try to bring in this bill called Build Back Better, which sounds much more like socialist propaganda. They try to tell the American people that spending more money will fix our issues.

The only thing that saved us from Joe Biden and Bernie Sanders radicalism are two Democrat senators who actually remember they represent red states.

Donalds was referring to Sens. Joe Manchin of West Virginia and Kyrsten Sinema of Arizona.

The Florida Republican, noting that he’s seen economic textbooks in high school that make socialism and capitalism seem equal, said gender ideology and critical race theory aren’t the only threats that parents of public school children should worry about.

Donalds, who joined the House in January 2021, told the CPAC crowd that he grew up as a poor kid from Brooklyn and wants others to have an opportunity to succeed, which he said socialism would deny.

“The left loves to deride capitalism, but they actually love capitalism,” he said. “They love what it creates for them. But they want you and they want me and they want every hardworking American to bend the knee. But America has woken up and we realize that we are not going down a socialist road.”

In talking about the left’s agenda, Donalds singled out a failed attempt to empower the Internal Revenue Service to monitor Americans’ financial transactions. He said the Green New Deal, pushed by Ocasio-Cortez, D-N.Y., would “deindustrialize the United States.”

The Florida Republican, referring to Democrats’ proposal for a federal takeover of elections, added: “They want to fix the elections to make the rest of America like California.”

“Their design [is] to make sure the elites in our country and the useful idiots in Washington, D.C., are the ones who control our economy,” Donalds said.