‘I Am an Overcomer,’ Lt. Gov. Winsome Sears Says. ‘Many Black People Are Overcomers.’ 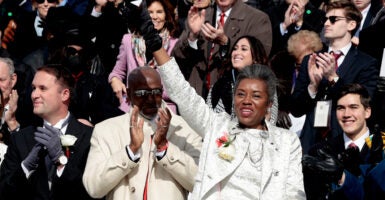 Virginia Lt. Gov. Winsome Sears greets the crowd Jan. 15 during the swearing-in ceremony for Gov. Glenn Youngkin on the steps of the State Capitol in Richmond. (Photo: Anna Moneymaker/Getty Images)

When she was a little girl, Winsome Sears emigrated to America from Jamaica. Years later, she chose to serve in the U.S. Marine Corps because, she says, “America had always been good to my family and me.”

Today, Sears is again serving her adopted country, this time as Virginia’s lieutenant governor. She made history when she was elected Nov. 2 to become the first black woman to hold that office.

Being where she is, Sears says, she is reminded of the opportunities that America affords, and that she is “an overcomer, ” adding that “many black people are overcomers.”

Sears joins “Problematic Women” during Black History Month to share her story of overcoming, and how she and Virginia Gov. Glenn Youngkin are restoring freedoms to citizens of the commonwealth.

Listen to the podcast below or read the full transcript of the conversation, originally heard on “The Daily Signal Podcast.”

Virginia Allen: It is my distinct privilege to welcome to the podcast Virginia Lt. Gov. Winsome Sears. Lieutenant Governor, thank you so much for being here.

Lt. Gov. Winsome Sears: Thank you for having me.

Allen: In November, the people of Virginia chose you to be their lieutenant governor, and you were sworn into office in January. I want to take us back for a moment to that night in November, when it was declared that you had won the election alongside Gov. Glenn Youngkin, and you delivered a really powerful speech that night. I want to take a minute to listen to just a few of your remarks.

Allen: Lieutenant Governor, in that speech, you talked about the fact that you were born in Jamaica, and then came to America. When did you come to America from Jamaica, and why did you ultimately decide to serve your country, to serve America in the Marine Corps?

Sears: Well, I came in 1970 … when my father decided he was stable enough to come back and bring me here. He would come and visit, but that was the year that I finally came.

And it was a traumatic time for me, I was 6 years old. It was a new country, new culture, new smells, new sounds. The music was different. Even though people were speaking English, it was a different way of speaking English, you know? And then I came in the cold, and I came from Jamaica where there’s sunshine every day.

Everything was different, but here I am. Obviously, I’m adjusted and adapted.

And then I had to actually make a decision whether I was going to stay in America or not when I came of age, and I decided I would want to stay here … for the same reasons my father came, because here is where the opportunities are.

Well, I graduated early from high school and I was taking a little bit of time before I was into college, just a few months. I was all set to start college that August, but then my grandmother died and she was still in Jamaica. And when she died, I just felt like my world had crashed. There was no reason to live.

And it just so happens that there was a Jet magazine with an ad for the Marine Corps on my mother’s coffee table in Jamaica. And I thought to myself, “That’s what I need. I need discipline. I need a reason to live. And if anybody can do it, the Marine Corps can.”

So, I joined the Marines, and yeah, they gave me a lot of reasons to live and a lot of discipline. It was good for me, and America had always been good to my family and me, and so I was willing.

I understood that you’re not joining the corps to get college credits and whatever else, that’s part of it, but Marine Corps puts a rifle in your hand and tells you the rifle is your best friend, and you understand what that means.

So, I knew that, ultimately, I could have possibly been called upon to give that ultimate sacrifice, but I was willing.

Allen: Yeah. Thank you for your service, Lieutenant Governor.

Allen: I think right now we’re at a moment in history where a lot of people are wrestling even now as we celebrate Black History Month. So many people, I think, are wrestling with America’s past of slavery and of segregation. Do you view America as a good nation? And what would you say to those who argue that the U.S. is fundamentally flawed?

So this is the best system, the capitalist system. It’s working for those who are able to participate, the opportunities are there.

I mean, I’m the one who got off the plane and here I am, here in the former capital of the Confederacy for goodness sake. I am second in command. Second in command. I’m a black woman. I am not first-generation American. I am still the immigrant.

As I said, I’m a black woman, immigrant, and what else can you say to me that would say, well, “racism, racism, racism”? How do you explain me? I’m not an outlier. I’m not a one-off. The opportunities are here.

By the way, Jamaicans have been coming and other people have been coming, who are black, to America since the 1900s, when it was way worse for us. But we understood that we could make the best of what we had, and we’ve been doing that.

I like to look at life as being half-full. That is, the glass is half-full because you know what that means? We can keep filling and filling.

But the constant black versus white versus Asian versus Hispanic—who wants to live like that? No. So, we need to teach our children all of history—the good, the bad, the ugly—because one thing we learned from history, as someone said, is that we don’t learn from history. But then, we’re going to keep going, we’re going to keep striving, because our children need a hope and a future. And to keep looking back, there is nothing back there. The future is ahead.

Allen: And you have been so strong on that point of education and talking about how important it is that we are making sure our kids are getting the best education possible. And you’ve been very vocal in your opposition to things like critical race theory in the schools. How do you and Gov. Glenn Youngkin plan to get critical race theory out of Virginia schools?

Sears: Well, as I said, we’re going to just teach history. We are going to teach what we know to be true. We’re not going to sugarcoat anything. None of us want that. In fact, some of us are saying, “Why don’t we make black history the whole curriculum? Why is it just a month?”

So … the other side of the political aisle, some of them, they like to keep people up in arms, always at each other’s throat, because it helps whatever agenda they have. So they use grievances that we, as black people, have historically faced to pit us against each other. Well, we’re not falling for that trick any longer. There are enough of us who are saying, “No more. We need a good education. We need it now because that’s what’s going to get us out of the woods.”

What we need is critical reading theory, critical math, critical science theory so that we can compete, our children can compete on a global scale, at the global marketplace, because America isn’t on this planet by herself.

So, while we’re doing this internal struggle, the rest of the world is out there. And we have to be prepared.

Allen: I think so many parents heard that message that you’re speaking right now during the election and they locked onto it. They said, “Yes, we want change in our schools.”

Sears: Well, they’re not going to be able to because the law is going to be effective March 1st, so we gave them that bit of cushion to begin to adjust to, the law is happening. It’s coming. The House of Delegates passed it. The Virginia Senate passed it.

It is in an emergency mode, which means … the governor, when he signed it, could have made it effective immediately upon signing, which was yesterday, the 16th. But instead he decided to give the schools some leeway to adjust.

March 1st it’s the law of the land and they will have to do what the law says, which is allow the parents the opportunity to decipher themselves whether their children will wear a mask or not.

Allen: Now, I think when we think back to your election, a lot of people were surprised to see Virginia go red in this election because for a long time Virginia has been trending blue. Do you think that Virginia is representative of the rest of the country and that we’ll begin to see other states embrace conservative principles?

Sears: I think what the people began to see in Virginia, and elsewhere—which, by the way, coming back to masks, is why you saw all those Democratic governors begin to change what they were saying about masks. Suddenly you want to have masks gone. Suddenly you want to give parents that opportunity.

We’re talking about truly blue places like New Jersey, Delaware—for goodness sake, California. California! And then Washington, D.C., and Oregon. It was shocking, shocking that in one day, on a Monday, suddenly all these Democratic states with their Democratic governors decided [they’re] not so happy about masks anymore. So, they see that the people are unhappy.

When you see, for example, in San Francisco, very liberal place, nobody has to tell us that, very liberal place, and they got rid of three school board members because they said, “We’re tired of the schools not being open. You’re focusing on renaming schools, for what reason? And these masks, and all these things. And our children aren’t learning.”

Allen: Virginia Lt. Gov. Winsome Sears. Lieutenant Governor, thank you so much for your time today. We so appreciate you joining the show.

Sears: Yes. And we want businesses to relocate here to Virginia because there’s a new sheriff in town and we are open for business. We’re building megasites, come down and check us out.

Allen: Thank you so much, Lieutenant Governor.

Sears: Thank you very much.