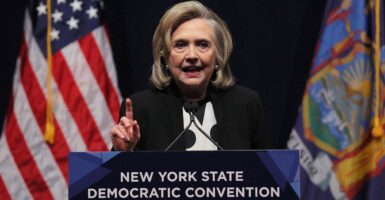 Rather than own up to a political loss by admitting Russian collusion was a hoax, Hillary Clinton and her team went after President Donald Trump even harder. Pictured: Clinton gives the keynote address Thursday during the second day of the New York State Democratic Convention in New York City. (Photo: Michael M. Santiago/Getty Images)

Once Obama took the oath of office as president, McCain’s hacking operation accelerated. All the Arizona senator’s men drilled into Obama’s computers, this time inside the White House.

When they discovered no proof of Obama’s alleged Kenyan birth, they nonetheless launched Kenyagate. McCain and other Republicans explained that the candidate who beat them bowed to Nairobi rather than Washington.

Rather than challenge Obamacare, the Paris Agreement on global warming, and the Iran nuclear deal on their merits, the GOP weaponized its Kenyagate fabrication and hounded Obama nonstop, for three long years. If Obama proved to be a native of East Africa, then hallelujah, Republicans reckoned. If not, these bogus charges would sandbag Obama, swamp his agenda, and sink him in the polls.

If a prosecutor’s court filing exposed this vast right-wing conspiracy, the ensuing news coverage would have been wall to wall. Breathless anchors and hand-wringing political analysts would have pondered every microscopic detail. Their barely contained rage would have choked every smartphone, laptop, and 60-inch HDTV between Pacific Heights and Atlantic City.

But this hypothetical scenario did not occur.

They did so, Durham wrote, to “establish ‘an inference’ and ‘narrative’ tying then-candidate Trump to Russia,” and “for the purpose of gathering derogatory information about Donald Trump.”

When such evidence did not emerge, Team Hillary yelled about it anyway. What good is a lie unless everyone hears it?

“Computer scientists have uncovered a covert server linking the Trump Organization to a Russian-based bank,” Hillary’s chief foreign policy adviser, Jake Sullivan, declared Oct. 21, 2016. “This secret hotline may be the key to unlocking the mystery of Trump’s ties to Russia.”

Sullivan was as transparent as tar. He failed to disclose that Hillary Clinton financed these “computer scientists.”

The duchess of Chappaqua made this Big Lie even bigger.

“It’s time for Trump to answer serious questions about his ties to Russia,” Clinton stated via Twitter that Halloween.

Rather than admit that she suffered one of the most gargantuan upsets in political history, Hillary and her team hacked even harder. According to Durham, they kept mining for dirt in Trump’s computers.

Even worse, after his inauguration, Team Hillary ran their fingers through the computer servers of President Trump, in the White House. This from the same crowd who shriek that Republicans endanger democracy.

While Fox News Channel and other conservative-friendly outlets have followed this story, the regime media have acted like bodyguards shielding a potentate amid restless subjects. Rather than attack this story, they simply pretend it’s not there.

“This revelation doesn’t match the storyline of Russian collusion that journalists have spent five years pushing,” Baker says. “So, they have no interest in the embarrassment that would inevitably come from giving time to Durham’s findings.”

The “mainstream” media’s cover-up of Hillary’s hackers has been virtually seamless. It would make George Orwell, father of the memory hole, weep.