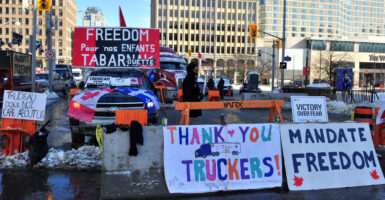 Several major media outlets have run stories over the past few days on the identities of individuals funding the “Freedom Convoy,” including names of donors that leaked during a hack of crowdfunding site GiveSendGo.

The New York Times ran a story Monday that analyzed the leaked donor data and attempted to draw conclusions about who was funding the Freedom Convoy protests. The story included the full names of donors who had contributed large amounts to the convoy fundraiser, as well as comments from several donors contacted by the Times.

The story also quotes messages attached to the donations, including one characterized by the Times as “menacing.” The Times did not immediately respond to the Daily Caller News Foundation’s request for comment.

The Washington Post published a similar story late Tuesday that also included the full names of certain donors. The Post’s story analyzed the U.S. ZIP codes that contributed the most money to the GiveSendGo fundraiser and included comments from donors.

The publication contacted individuals who had contributed as little as $50 to the Freedom Convoy fundraiser, according to the article.

Email provided to me by a source pic.twitter.com/qbzebYyHiP

“We were reporting on a matter of public interest and reached out to people listed in the data in order to confirm its authenticity. We largely named people who responded on the record. We named two people who did not respond to requests for comment,” Shani George, the Post’s vice president of communications, told the Daily Caller News Foundation in a statement. “In both cases, they are or had been government officials. A third person named in the article was publicly listed on the GiveSendGo campaign site. We have conducted similar investigations in the past.”

Several individuals whose names were included in the leaked donor list have already begun to experience harassment and negative consequences.

Tammy Giuliani, who donated $250 to the Freedom Convoy fundraiser, told the Ottawa Citizen that she had been forced to close her business after receiving threats from individuals angry over her contribution. Marion Isabeau-Ringuette, communications director for the Ontario solicitor general, “no longer works” for the state government after her donation to the Freedom Convoy was revealed, according to Toronto CityNews.

The Toronto Star published an article late Monday analyzing the leaked data to determine the portion of donations to the Freedom Convoy that came from outside of Canada. The National Post identified several already high-profile donors to the convoy in a story published Monday, though the article did not identify lower-level donors by name, while Global News wrote an entire story about one Canadian company’s $75,000 donation.

The Toronto Star, National Post, and Global News did not immediately respond to the Daily Caller News Foundation’s request for comment.