COVID-19 and the Failure of America’s Major Religions 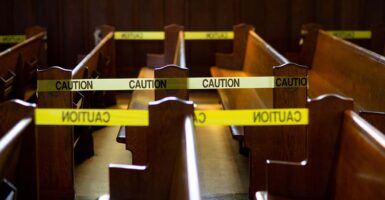 Many religious leaders have had unquestioning obedience to secular COVID-19 mandates at the cost of fundamental religious teachings and liberties. (Photo: Kevin Trimmer/Getty Images)

For two years, Americans have been partially or entirely deprived of fundamental freedoms—of assembly, speech, religious liberty, making a living, a child’s right to an education, access to early treatment for a potentially deadly virus, and more—for the first time in American history. That half of America, especially its elites, has either made peace with or supported these deprivations of freedom is why many of us worry about America’s future as a free society.

Even more concerning has been the reactions of America’s great religions—specifically, Catholics, Protestants, Mormons (Latter-day Saints), and Jews. The government issued irrational (as well as anti-religious and unethical) edicts and nearly every church and synagogue obeyed.

These churches and synagogues closed their schools to in-classroom instruction despite the fact that COVID-19 presented virtually no threat to young people.

Exponentially more children have been hurt by closing religious and secular schools and, later, by making children wear masks—even outdoors—than by COVID-19. This has been made clear not only by relevant data in America but by Sweden, which never closed its schools for children under 16—and not a single student or teacher died from COVID-19.

As Swedish physicians wrote in a letter published in the New England Journal of Medicine in February 2021:

Despite Sweden’s having kept schools and preschools open, we found a low incidence of severe COVID-19 among schoolchildren and children of preschool age during the SARS-CoV-2 pandemic. Among the 1.95 million children who were 1 to 16 years of age, 15 children had COVID-19, MIS-C, or both conditions and were admitted to an ICU, which is equal to 1 child in 130,000 … No child with COVID-19 died.

Recently, some churches and synagogues told their congregants that children as young as 5 had to be vaccinated in order to attend services. It is immoral to give young children a COVID-19 vaccine for which we have no long-term safety data, and especially when children are not at risk from the virus. Yet most churches and synagogues, pastors, priests, and rabbis have insisted on it.

Given the sheeplike behavior of so many of America’s religious leaders and institutions, the question is: Why?

There are both similar and different answers for each religion. The similar reasons are that most religious institutions and leaders have become largely indistinguishable from their secular counterparts. With the exception of attending church or synagogue, most Christians and Jews think and act like most secular Americans.

Regarding COVID-19, most religious leaders have been as scared as most secular leaders. And regarding fear, the only major difference between Americans has not been between religious and secular, but between right and left.

Conservative clergy have been less scared than liberal clergy, just as conservative nonreligious Americans have been less scared than liberal nonreligious Americans. Which, of course, prompts the question: Does religion make people wiser, better, and more courageous? Or has religion largely become something that serves only to make adherents feel good?

With regard to Christians there is the issue of the New Testament admonition to obey secular authority. To cite the most famous example: “Let every person be subject to the governing authorities. For there is no authority except from God, and those that exist have been instituted by God. Therefore whoever resists the authorities resists what God has appointed, and those who resist will incur judgment” (Romans 13:1-3).

Mormons have an additional issue. They are not only expected to obey the Bible, but LDS leaders as well. The head of the Church of Jesus Christ of Latter-day Saints is the First Presidency, which consists of three men who are regarded as prophets—God speaks through them. Faithful Mormons therefore regard some First Presidency pronouncements as the word of God.

On Aug. 12, 2021, the First Presidency (whose president is, not surprisingly, a physician) released a statement saying, “We urge individuals to be vaccinated,” and, “We can win this war if everyone will follow the wise and thoughtful recommendations of medical experts and government leaders.”

So, what are these Mormons to do?

A Brigham Young University publication, the Daily Universe, quoted a Mormon woman named Hannah Colby: “I am kind of like at odds with the First Presidency, but I know President Nelson is a prophet of God,” she said.

The paper did not reveal how Colby resolved that tension.

Christians need to grapple with the New Testament admonitions to obey secular authorities. That’s what the great majority of German Christian pastors and churches did in the 1930s. In light of Romans 13, were they right or wrong? If the irrational and freedom-destroying mandates of the secular authorities in America (and the rest of the West) force serious Christians to confront the question of whether a Christian must always obey the government, that will be one of the few good things to come out of the COVID-19 era.

And what has animated most Jews—and nearly all non-Orthodox (and more than a few modern Orthodox) synagogues—to obey irrational and immoral rules of secular authorities?

One obvious answer is that most non-Orthodox Jews are on the left. And the left lives in fear (of COVID-19, of global warming, of secondhand smoke, of diving boards, and much else) and is prepared to subvert any freedom to assuage their fears. In any event, freedom is not a left-wing value; it is a liberal value. But most liberals, Jewish and non-Jewish, support the left.

All this notwithstanding, the fact is that a disproportionate percentage of those who defied irrational and unconstitutional governmental mandates have been religious Americans. The tragedy of American religious life is that religious people who lack courage are concentrated in leadership positions.

In September 2021, for the 15th consecutive year (except for 2020), I led Jewish High Holiday Services for about 400 people—no masks required, and no vaccination necessary. Other synagogues could have done the same thing—but nearly all rabbis and synagogue boards were too scared and too obedient to do so. And of course, the same holds true for most churches, whether Catholic, Protestant, or Mormon. Too scared. And too obedient to irrational dictates.

They will pay a price as people will gradually come to understand how weak their religious leaders were. And they will pay another price: By keeping their churches and synagogues closed for so long (for no good reason), many of their congregants may just not return. If my clergy didn’t think it was important that I attend for nearly two years, maybe it just isn’t that important.