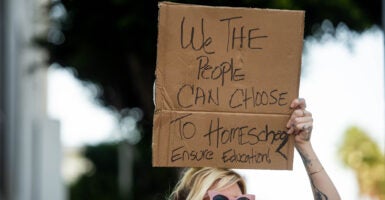 A delegate in the Maryland General Assembly from Baltimore County is getting pushback on her proposal to create a homeschooler "advisory council" from homeschoolers themselves. Pictured: A Los Angeles mom who gave her name as Vivian and who homeschools two children makes her views known at the Los Angeles Unified School District headquarters on Sept. 9. (Photo: Sarah Reingewirtz/MediaNews Group/Los Angeles Daily News/Getty Images)

If we have learned anything about left-wing cultural revolutionaries over the past few years and decades, it’s that they insist that all conform to their view of “diversity.”

All are welcome, except for those who disagree.

That’s why it’s so troubling to see government authorities rope in, and attempt to control, people attempting to maintain their independence.

Maryland Delegate Sheila Ruth, a Baltimore County Democrat, recently proposed legislation in the Maryland House of Delegates that would create a deeply worrisome “advisory council” to watch over and gather data on homeschool families.

This is precisely the sort of thing many homeschool parents wanted to avoid when they chose that path for their children in the first place.

Bethany Mandel, a conservative writer and homeschool mother living in Maryland, raised the alarm about this legislation and called out Ruth on Twitter.

In a message to The Daily Signal, Mandel explained why the legislation is so troubling.

“They’ll pass more restrictive rules on us and say, ‘It was suggested by homeschooling families themselves! We have a council!’ (That they chose.),” Mandel wrote.

The Home School Legal Defense Association, a legal support group for homeschoolers based in neighboring Virginia, also warned about the potential for abuse by the proposed advisory board.

“This bill would create a quasi-official source for information on homeschooling, which would, in turn, minimize the effectiveness of grassroots homeschool groups and individual advocates,” HSLDA noted in a statement.

Homeschooling has thrived for decades without government assistance. Instead of creating a new bureaucratic entity to gather information on the needs of homeschool programs, HSLDA encourages government entities and actors to respect homeschooling programs by preserving liberty and avoiding unnecessary regulation.

The legislation was so worrisome that a group of members of the Maryland General Assembly called for the bill to be withdrawn.

The letter said that the advisory board would put an enormous amount of power in the hands “of just a few partisan political appointees” and that a 16-person advisory panel in no way could represent the diverse opinions of homeschool families in Maryland.

A Change.org petition calling on Ruth to withdraw HB 832 is seeking 2,500 signatures, and as of this writing, it has garnered nearly 1,700.

As troubling as the legislation is, it’s not happening in a vacuum.

Another piece of legislation, introduced in January, demonstrates the radical plans in store for the state’s public schools. House Bill 352 aims to create an American Studies and Social Equity Standards Advisory Board.

The purpose of the bill would be to redirect examinations of history in schools to be framed around race and ethnicity.

It essentially would mandate a laundry list of diversity, equity, and inclusion requirements for public schools in the state. One of the bill’s sponsors said it wasn’t “a critical race theory bill,” which is almost laughable. This legislation uses almost every buzzword imaginable related to critical race theory, just without literally saying “critical race theory.”

Just as bad, evidence suggests that they will leave no stone unturned to bring leftist indoctrination to every K-12 public school student in the state.

It isn’t just happening at the state level.

This comes from the Montgomery County Public Schools website:

This summer, a cross-office team was charged with creating a long-term plan to transform curriculum and develop interconnected and interdisciplinary learning experiences for students, PreK-12 that strengthens students’ sense of racial, ethnic, and tribal identities, helps students understand and resist systems of oppression, and empowers students to see themselves as change agents.

What this is effectively announcing is that the public schools are for the revolution, one based on racial essentialism, and they will be indoctrinating your kids to be loyal foot soldiers in the cause.

Oh, but weren’t we informed by left-wing media commentators that critical race theory isn’t in schools, and that it’s just a figment of our imaginations?

The fact is, this sort of pedagogy is being introduced and enforced around the country. The left-wing media can spin and twist and try to deny it, but parents are catching on to this being the reality.

That matters very much when considering Maryland’s proposed homeschool advisory board. Given the transformation of institutions—especially public schools—into engines of wokeness, it’s not hard to see how malicious such a governmental board could become.

An agency constructed to “gather information” and staffed by political appointees could quickly turn into a governmental hammer to bludgeon homeschool parents into looping their children into the cult of diversity, equity, and inclusion.

It should be no surprise that this effort comes as parents around the country have begun to protest the curriculums and policies of public schools, both for their embrace of critical race theory—or whatever they want to call its associated ideas—and absurdly restrictive COVID-19 policies.

The left’s attitude is that they have an inherent right to indoctrinate your children. Any attempt to stop them from doing so, from within the public school system or from without, is treated as illegitimate.

That’s why what’s happening in Maryland is so concerning and a sign of things to come.

They want you and your family to comply with the cultural revolution that’s sweeping our institutions. They won’t let you go. They don’t want you to have a choice until all your choices are the same.