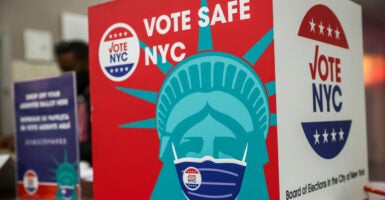 New York City voters cast their ballots for mayor and other municipal offices on Nov. 2. About five weeks later, the New York City Council voted to greatly expand the city's voter rolls by extending the franchise to hundreds of thousands of foreign noncitizens who live in the Big Apple. But a lawsuit has been filed to block the move. (Photo: Tayfun Coskun/Anadolu Agency/Getty Images)

NEW YORK — I recently was delighted to sue New York City’s Board of Elections.

We aim to overturn City Charter Chapter 46-A, which our litigation dubs “the Foreign Citizen Voting Bill.” Passed by the City Council on Dec. 9, the law lets foreign citizens vote in Gotham’s local elections.

Starting Jan. 9, 2023, this absurdity would empower foreign citizens to help choose our mayor, City Council, borough presidents, and district attorneys, and decide local ballot measures. These new voters would include green card-bearing legal immigrants and even illegal aliens under federal protection, such as asylum seekers and Deferred Action for Childhood Arrivals designees.

Foreign citizens could invade the U.S.-Mexico “border,” penetrate America without permission, request asylum, fly to Westchester Airport aboard one of Joe Biden’s free, clandestine late-night flights; take a cab to Manhattan, and–after 30 days–cast ballots alongside Gotham’s voters who were born in the USA.

New York joins San Francisco, two Vermont cities, and 11 Maryland communities in converting foreign citizens into local voters. Most Americans consider this a sucker punch to the core principle of government deriving its just powers from the consent of the citizens it governs.

Voting by foreign citizens also could fluster overwhelmed election officials. They would have to let foreign citizens vote on local candidates and causes, but bar them from state and federal races.

During a frantic Election Day, what would prevent precinct workers from unwittingly—or even deliberately—handing foreign citizens ballots for local candidates and state-level, congressional, and even presidential aspirants?

What fuels this exercise? The enfranchisement of 800,000 new foreign voters, most of whom likely will vote Democrat.

The Democrat left, which pushed for this, is never satisfied. As they relentlessly mutilate America, their next demand will be for foreign votes in state races.

And then—why not?—“Let them cast ballots for Congress and for president!”

But the New York City law is not just stupid, offensive, and dangerous. It has the added disadvantage of being unconstitutional.

As our lawsuit details, it violates the 15th Amendment to the U.S. Constitution, adopted in 1870: “The right of citizens of the United States to vote shall not be denied or abridged by the United States or by any State on account of race, color, or previous condition of servitude.”

My co-plaintiffs and I contend, and the New York City Council’s deliberations confirm, that the new measure dilutes and therefore abridges the votes of New Yorkers, not least black citizens, because local lawmakers acted “on account of race,” not color-neutral citizenship grounds.

This law also grinds its cleats into the New York state Constitution. The latter limits the vote to “every citizen” who is at least age 18 and a 30-day resident.

This outrage deserves to be strangled in its crib. A judge should do the honors—with all deliberate speed.

Coachman, Gilhuys, James, and I eagerly await our day in court.