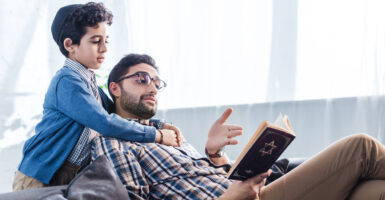 It’s bad enough that some in government aspire to divide us by race, religion, or languages. But using our schools and law enforcement to divide our families is unacceptable. (Photo: LightFieldStudios/Getty Images)

Rabbi Dov Fischer is the West Coast vice president and senior rabbinic fellow at the Coalition for Jewish Values, a senior contributing editor at The American Spectator, and rabbi of Young Israel of Orange County.

A Catholic mom in Northern California enrolled her daughter in a public charter school. During her initial Zoom classes, the girl, an incoming freshman who had not yet stepped foot in the school due to COVID-19, was asked her name and “preferred pronouns.”

She chose a male name and male pronouns. The school then routinely used this information without informing her parents, and then began to socially transition the child—the first in a series of steps culminating in a so-called “sex change.”

It’s a measure of the peril of our culture that these parents have asked that I protect their anonymity. They have good reason to fear: soon after they voiced their anger with school officials, Child Protective Services showed up at their doorstep.

It’s bad enough that some in government aspire to divide us by race, religion, or languages. But using our schools and law enforcement to divide our families? Deliberately separating parents from their own children in order to indoctrinate our children with radical gender ideas—starting in preschool?

This is wrong. Had COVID-19 not forced so many classes into our homes via Zoom, few of us would have become aware of it.

The California Department of Education says these genders are ever expansive, ever evolving and ever changing, and that children can self-certify or choose their own gender. The Center of Disease Control and Prevention defines “gender nonbinary” as “gender creative,” meaning children can create or make-up their own gender, and these non-conforming imaginary genders are marginalized minorities.

The California Teachers Association adopted a policy in January 2020 stating students should be able to access hormone therapy without parent consent, for the sake of “equity.” This is already a reality for foster youth starting at age 12, thanks to Assembly Bill 2119. Also, according to Assembly Bill 1184, minors can bill their parents’ insurance without their parents’ consent for gender-affirming care, which includes hormone therapy or “sex-change” operations.

I am an Orthodox Jew. Although my viewpoint on this matter may be inconsistent with the zeitgeist, it is normative among more than 1,500 American Orthodox rabbis with whom I affiliate in organizations like the Coalition for Jewish Values, the Rabbinical Alliance of America (Igud HaRabbanim), and other mainstream Orthodox Jewish bodies.

We stand boldly and proudly alongside Americans of other faiths who share family values similar to ours. Devout Catholics, Protestants of varying denominations, faithful Muslims, Hindus, and others. We work together in the Statewide Interfaith Coalition (www.Interfaith4Kids.com), a network of many races, ethnicities, religions, and skin colors to oppose extremist gender ideologies infiltrating pre-K-12 education. Together, we oppose the erosion of parental rights, as well as the deceptions perpetuated through public education today.

A colleague, a Southern California imam, has asked, “When will we collectively say enough is enough?” It’s not hard to imagine that we’re on the road to becoming a society in which the state owns children. But not yet.

In America, parents give birth, feed, nourish, house, clothe, and embrace their children. We are not compelled to inculcate them in a state religion. We decide whether they trick-or-treat on Halloween or deliver mishlo’ach manot on Purim—or both. We monitor and guide their social media. We help them choose friends. We teach them to obey the law.

Here in the state of California, school personnel or mental health workers partnering with schools, now have authority—solely based on a child’s request, regardless of age—to change a child’s gender category in the California Data System without parental knowledge or consent. This betrays parental trust no matter religious or non-religious affiliation.

Sacramento and the local school boards must leave parents to mentor their children on gender matters. If they don’t, they will begin to exit public schools in great numbers.

The article was originally published in the Orange County Register.