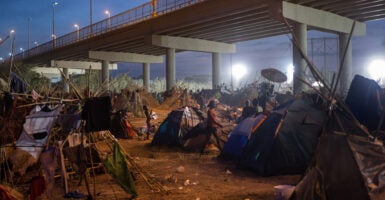 Critics point to the Biden administration's lackadaisical response to the enormous encampment of as many as 14,000 illegal immigrants, most of them from Haiti, in September in Del Rio, Texas, as indicative of President Joe Biden's indifference to—or worse, complicity in—the crisis at the southern border. (Photo: John Moore/Getty Images)

PARK CITY, Utah—President Joe Biden’s no-border policy has detonated an explosion of illegal-alien apprehensions and got-aways at the southern “frontier.”

Millions of Americans consider this one of Biden’s biggest failures, surpassed only by his utterly calamitous withdrawal from Afghanistan. However, this fiasco is Biden’s finest hour.

After 11 months, Biden’s “border” remains wide open, if not functionally erased. Illegal aliens cascade across. Between Feb. 1 and Dec. 31, 2021, on Biden’s watch, Customs and Border Protection apprehended a record 1,956,596 illegal aliens on the southern “frontier,” versus 511,192 one year earlier, under then-President Donald Trump—up 283%.

Biden gives illegal immigrants free tickets to ride buses that whisk them deep into the U.S. interior. Illegal aliens in Brownsville, Texas, score free cab rides to the airport, whereupon they jet off to Atlanta, Houston, and other cities.

Still other illegal aliens—including single adult males—board clandestine night flights that land after closing time in New York’s Westchester Airport and other airfields. As if in a “Saturday Night Live” sketch, illegal aliens without papers may use their arrest warrants as IDs to board aircraft. Specifically, this is Immigration and Customs Enforcement Form I-200, Warrant for Arrest of Alien.

And these are just the illegal immigrants that Customs and Border Protection intercepted. Biden let an estimated 500,00 “got-aways” get away. Where are they? Who knows?

Biden has had an entire year to improve this rapidly deteriorating mess. Instead, he hasn’t lifted a cuticle.

Having done nothing about this for a year, one must conclude that this is what Biden wants.

But why? Why would Biden willfully obliterate the U.S.-Mexico boundary and vacuum millions of illegal immigrants north?

The open “border” is designed to import the maximum number of Future Democrats of America. Biden and his ilk see these people as potential voters and, they reckon, a majority will be Democrats.

“For the Left, these policies are practically a fantasy come true,” Jessica M. Vaughan, director of policy studies with the Center for Immigration Studies, told me. “The Democrats think that, in the long run, these new arrivals will not only stock certain congressional districts with fresh bodies, but also become loyal Democrat voters.”

The Service Employees International Union’s Eliseo Medina, an honorary chairman of the Democratic Socialists of America, seems to concur. He said that an influx of immigrants “will create a governing coalition for the long term, not just for an election cycle.”

A clearer indication of Democrats’ true intentions lies in their reaction to legislation by Rep. Dan Crenshaw, R-Texas. His measure declared “the sense of Congress that allowing illegal immigrants the right to vote devalues the franchise and diminishes the voting power of United States citizens.”

The now-deceased Rep. John Lewis, D-Ga., responded: “We are prepared to open up the political process and let all of the people come in.”

The Republican motion died 197-228 in the Democrat-controlled House on March 8, 2019. Democrats voted overwhelmingly, 227-6, to hand ballots to illegal aliens. By 191-1, Republicans unanimously (all but Rep. Justin Amash of Michigan) chose to reserve the vote to U.S. citizens.

If Biden’s blessed “voting rights” bill passes—God forbid—new, federally imposed same-day registration would let these people approach the polls on Election Day and demand ballots. Officials would have no time to check their citizenship status.

A new federal ban on voter ID would prevent election workers from seeking proof—not even their arrest warrants—that these people are who they say they are.

And existing federal and county requirements for foreign-language ballots would help illegal immigrants vote in Chinese, Spanish, Tagalog (Filipino), Vietnamese, and other languages.

From soaring inflation to surging crime to Taliban terrorists sporting billions of dollars worth of abandoned U.S. military gear, Biden’s belly flops are innumerable. But America’s breached “border” and the ensuing Hurricane Katrina-esque flood of illegal aliens are not among them. Indeed, this policy is Biden’s most stunning triumph.