There Is No Salvaging Congress’ Current Effort to Compete With China 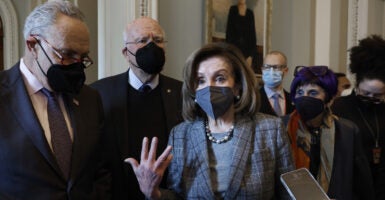 The House of Representatives is considering the America COMPETES Act, a 3,000-page House response to the Senate’s United States Innovation and Competition Act. The $318 billion bill’s ostensible purpose is to address the wide-ranging challenge that China poses to America’s homeland, economy, global interests, and values.

The bill does everything imaginable but make America more competitive—let alone deal with the breadth and depth of the China threat.

And it is darn expensive. The only way to get a viable bill that actually enhances the interests of the nation is to start over.

Thursday’s debate on the House floor is not going to save this bill. Most of the amendments that the House Rules Committee has allowed (it disallowed far more) to be offered are small ball. The amendments that are of any significance will make the bill worse. Some of the bad ideas in this bill include:

These and other amendments pull Congress away from the sort of things it could do to actually confront the China threat. Yet, even as members push back on them, it is important to stay focused on the costly, non-China-related provisions already baked into either this bill or its Senate precursor.

The reason why the amendments on offer are so meager is because the intent is just to get into negotiations with the Senate and pass and get signed into law the things in the underlying bill. Examples include:

The ideas in the America COMPETES Act most egregiously irrelevant to the China challenge are summarized in the president’s official Statement of Administration Policy.

His support for this purported attempt to help Americans compete with China hinges entirely on non-China-related priorities, including the expansion of the Department of Energy’s Office of Science, expansion of the National Science Foundation, the creation of regional technology and innovation hubs, and expansion of the Manufacturing Extension Partnership program and Manufacturing USA institutes.

While this bill is unsalvageable and reconciling it with the Senate bill is unlikely to fix it, there is a way forward.

First of all, there are amendments to the bill that were denied by the Rules Committee to be considered on the House floor. Secondly, the foreign relations division of the Senate’s Innovation and Competition Act had several positive provisions, and its House counterpart a couple. The two committees were trying to work out compromise to serve as a base for a bigger package when the House Democratic Leadership blew the whistle on the process in order to pursue the more politically directed America COMPETES Act package.

The House China Task Force and the Republican Study Committee have also produced comprehensive proposals that could be used as a basis for starting over again. And at this point, that is, unfortunately, the only sensible thing to do.