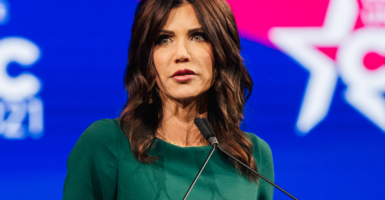 State lawmakers and the South Dakota Right to Life reportedly expressed concerns that the bill is premature and could affect the state’s ongoing legal battle with Planned Parenthood, according to the South Dakota newspaper Argus Leader.

“I am as pro-life as can be, and because of that, I do not want to do something that will jeopardize our involvement in a court case that could abolish abortion in this country,” South Dakota House Speaker Spencer Gosch told the newspaper.

Noem argued in a statement that national pro-life leaders are pushing for exactly the protections she put forward.

“Every single life is precious and deserving of our protection—but apparently South Dakota legislators think otherwise,” the Republican governor said. “It grieves me that they would take this unprecedented action at this time, based on the advice of one out-of-state lawyer.”

The governor was referring to Harold Cassidy, Noem spokesman Ian Fury told The Daily Signal, a New Jersey-based lawyer who has successfully litigated abortion cases for many years.

According to his website, Cassidy is “widely recognized as the leading attorney in the nation in protecting pregnant mothers against the excesses and abuses of an abortion industry.”

Among many other cases, Cassidy defended South Dakota’s 2005 Informed Consent Abortion Statute, requiring abortionists to tell women that abortion takes the life of a “whole, separate, unique, living human being” when Planned Parenthood sued the state.

Neither Gosch nor South Dakota Right to Life immediately responded to requests for comment.

In Planned Parenthood v. Noem, abortion providers challenged a South Dakota law that requires women to consult with a crisis-pregnancy center before they abort their unborn baby.  A federal judge quickly blocked the law after the South Dakota Legislature passed it in 2011 and the American Civil Liberties Union and Planned Parenthood sued the state.

Planned Parenthood again sued when Noem again sought to enforce the legislation in 2021, and a federal judge ruled in August that the law would likely “infringe on women’s right to free speech secured in the First Amendment, and it presents an undue burden on a woman’s right to access abortion.”

The Daily Caller first reported in early December that South Dakota had appealed the district court ruling prohibiting the state from enforcing the law.

“Last year, there were 10 abortions in South Dakota before a heartbeat can be detected, so we do not believe this legislation would ‘moot’ Planned Parenthood v. Noem,” Fury told The Daily Signal.

“The only way that it possibly could [moot the lawsuit] would be if Planned Parenthood left the state entirely—in which case we would achieve our goal of protecting every unborn life in South Dakota, since Planned Parenthood runs the only abortion mill in the state,” the Noem spokesman added.

Noem’s pro-life bill is modeled after Texas’ Heartbeat Act, legislation that sparked massive backlash among Democrats and pro-abortion advocates, as the bill allows private citizens to sue anyone who “knowingly engages in conduct that aids or abets the performance or inducement of an abortion.”

Critics of the legislation likened Texas lawmakers to the Taliban and said that the bill put “bounties” on the heads of women seeking abortions in the state.

Controversy over the bill sent it straight to the highest court in the land. In late January, the Supreme Court denied the latest requests from abortion providers to intervene in the challenge to the law.

Noem’s bill would also allow “any person, other than the state, its political subdivisions, and any officer or employee of a state or local governmental entity in this state” to sue any person who “performs or induces an abortion” of a baby with a heartbeat or anyone who “knowingly engages in conduct that aids or abets the performance or inducement of an abortion.”

The governor emphasized in her Wednesday statement to the press that her goal has been ensuring that South Dakota is protecting as many lives as possible.

“National pro-life leaders believe that now is the time to have this sort of protection in law to save lives,” Noem said.

The South Dakota state Legislature “has always guaranteed that every bill gets a hearing, and that is something that I’ve always loved about our process,” she said. “We have rules and an open process, and we play by those rules. To our knowledge, this is the first time in decades that a bill has been denied a hearing.”

“South Dakota deserved to have a hearing on a bill to protect the heartbeats of unborn children,” Noem added. “We can hear heartbeats at six weeks, but I’m disappointed this bill was not granted even one hearing.”

Tensions over the bill are particularly notable in light of past contention between Noem and Republican state lawmakers over legislation touching on other culture war issues.

The South Dakota governor ignited a conservative firestorm last spring when she failed to certify a bill banning biological males from participating in women’s sports. On Thursday, a little less than a year later, Noem signed a bill mandating that educational institutions base student sports teams on biological sex.

The governor insisted last spring, in the face of heavy criticism from conservatives, including Fox News host Tucker Carlson, that HB 1217 would subject South Dakota to lawsuits the state could not win.

The Daily Caller News Foundation first reported in March that Noem was wavering in her support for HB 1217 due to pressure from special-interest groups in South Dakota. Critics accused the governor of “political theater” and caving to political pressure at the time, accusations that Noem and her team vehemently denied.

Since then, Noem has introduced and signed legislation codifying her executive orders mandating that only biological female athletes can participate on sports teams designated for girls or women.

Noem told The Daily Signal in a late January interview that the original bill was “deeply flawed.”

“I’m a governor. You don’t sign bad bills into law that end you up in lawsuits that keep you from being able to take action when you need to,” she said. “Instead, you fix them, make sure they’re correct and appropriate, and that you literally can push forward the protections that are necessary.”

“I signed two executive orders immediately that protected girls sports at the K-12 level, and then also at the college level, and said that when we got back into legislative session that I would be bringing the strongest bill in the country to put it into our statutes,” she explained.

“That is what we’re doing this year,” Noem added. “We have a bill that I and my team have drafted that is very strong, keeps that protection in place that my emergency declaration—my executive orders—did, and it’ll ensure that only girls play in girls sports here in South Dakota.”