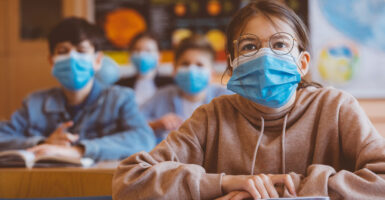 Loudoun County Public Schools in northern Virginia is being sued for defying an executive order by the governor requiring districts to allow parents to opt their children out of mask mandates. (Photo Illustration: izusek/Getty Images)

Fight for Schools announced the lawsuit against the Loudoun County School Board in an emailed press release Tuesday evening.

“Virginia law guarantees the rights of parents to make critical decisions affecting their children, particularly when those decisions concern their education and well-being,” the parents said in the lawsuit.

BREAKING: A group of Loudoun County parents have filed a lawsuit against the Loudoun School Board for ignoring @GlennYoungkin‘s Exec. Order that allows a parental opt-out on student face masks in schools. Thank-you Governor for fighting for parents! pic.twitter.com/xHvQ0N5oT5

Loudoun County Public Schools is one of the public school systems in northern Virginia that vowed to defy an executive order by Virginia Gov. Glenn Youngkin requiring districts to allow parents to opt their children out of mask mandates.

Past controversies between the school board and parents surrounded allegations that members of the Loudoun County School Board were part of a secret Facebook group targeting parents opposed to the use of critical race theory in the system’s curriculum, the use of pornographic books in classes, and claims that the school system covered up a sexual assault by a “gender fluid” student.

“LCPS willingly followed former Governor [Ralph] Northam’s executive orders and routinely excused its actions by pointing the finger at him and saying, ‘We’re just doing what we’re told,’” Ian Prior, the executive director of Fight for Schools, told the Daily Caller News Foundation. “Now that Governor Youngkin has issued an executive order giving parents a choice to make decisions for the health and welfare of their children, LCPS shows just how hyperpartisan it’s leaders are.”

LCPS to require masks when schools open on January 18 and for the remainder of the week. Read all details: https://t.co/GWY3eVun1C pic.twitter.com/b50LjUlZnC

“I commend these brave parents for being willing to stand up and fight yet another brazen and illegal action from failed Superintendent Scott Ziegler and Loudoun County Public Schools,” Prior added.