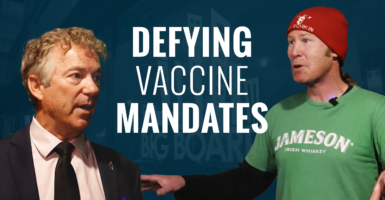 Multiple Republican members of Congress and a slew of their staffers showed up Tuesday evening to support The Big Board mere hours after the city’s Health Department put a notice of closure on the bar’s doors.

The Big Board was pretty packed Tuesday night for a bar without a liquor license in a city that loves its booze.

Multiple Republican members of Congress and a slew of their staffers showed up to support the D.C. bar and restaurant, located at 421 H St. NE, mere hours after the city’s Health Department put a notice of closure on its doors.

“This establishment is ordered CLOSED until further notice for a violation of the District of Columbia food code regulations (Title 25 of the DCMR), which presents an imminent health hazard(s) to the public,” reads a sign posted around 6 p.m.

While The Daily Signal has heard from multiple frustrated and angry restaurant owners, The Big Board appears to be the only bar in the nation’s capital to openly defy Mayor Muriel Bowser’s mandate that bars and restaurants require patrons to show proof of vaccination against COVID-19.

The bar’s noncompliance has not gone unnoticed: Critics and supporters have been very vocal on social media, and a GoFundMe page started by The Daily Caller’s Henry Rodgers has raised over $23,000 in The Big Board’s name.

But owner and veteran Eric Flannery is refusing to back down from his decision not to discriminate against any of his customers. He became emotional as he spoke with Republican lawmakers and reporters Tuesday evening.

“When people walk into this place, we get them in, sit them down, get ’em a drink, get ’em a beer,” he said. “We get them food. Really good food.”

“When people ask me, ‘Where are you going to get on the other side of this?’ I don’t know. I just know that I’m doing the right thing,” Flannery said. “And this place is supposed to be open.”

Congressional staffers filled the second floor of the H Street bar and restaurant as they enjoyed The Big Board’s hamburgers with two GOP lawmakers from Kentucky: Sen. Rand Paul and Rep. Thomas Massie.

“It’s a big decision, civil resistance, civil disobedience; you can lose your livelihood,” Paul told reporters, before saying of Flannery: “So I’m incredibly proud of him, I’m very supportive of what he’s doing, because he’s saying, ‘My individual liberty is worth the price of me even losing my business.’”

The lawmakers expressed admiration for Flannery’s stance and spoke out against Democratic lawmakers and government executives, such as Bowser, who are enforcing vaccine mandates.

Bowser’s enforcement of her mandate is not legitimate, both Massie and Paul said. Paul went so far as to say that Bowser should be impeached.

“We have a bill in the House and the Senate to take away the authority to enforce these mandates,” Paul told Reason’s Robby Soave.

The Kentucky senator told The Daily Signal that health officials have been wrong consistently on the COVID-19 pandemic, saying, “None of the things they are for, work.”

“Vaccines work, and so does natural immunity,” he continued. “That’s the only thing that has changed anything here. And none of that has anything to do with anybody not wearing a mask, not drinking after 10 [p.m.], not having more than 25% [capacity]. None of the things they have told us to do have affected the disease at all.”

D.C. Health Department data shows that The Big Board has been issued at least seven citations as of Feb. 1, either for “staff not wearing masks” or “vaccination verification not required to enter.”

Flannery told reporters that he loves everyone who comes into his establishment, insisting that The Big Board has followed all of the District of Columbia’s COVID-19 rules since the beginning of the pandemic.

But the bar owner said he drew the line on requiring his servers to wear masks or require proof of vaccination.

“My servers are not lesser people,” Flannery said. “They don’t need to be masked. They don’t carry disease.”

Neither the Health Department nor the mayor’s office responded to repeated requests for comment from The Daily Signal.