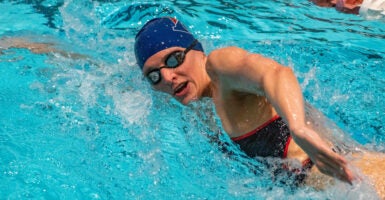 How individuals and institutions react to Lia Thomas, the biological male who is allowed to compete in women’s college swim competitions, is a good indicator of people’s values and level of rationality.

Now named Lia, Thomas has set national records in women’s swimming, such as in the 200 and 500 freestyle. Women who have trained nearly all their lives to be competitive swimmers were cheated out of wins.

The obvious question is: Is this fair? Is it fair for a biological male to compete as a female against females? Or is Thomas cheating?

To most Americans the answer is clear: Thomas is cheating.

As I recently wrote a column arguing that Thomas is a cheat, I will not belabor the point.

Instead, I will discuss others’ reactions, for, as I wrote, they reveal a great deal about those people and institutions.

He ended his column with an ode to Thomas:

“And so if there was something enduring about Saturday[’s swim competition between Penn and Harvard], it was not the two races that Thomas comfortably won or the two relays where she gamely tried. It was the way she carried herself in the water—head down, with grace and ease.”

That is how “woke”—a term that includes amorality and irrationality—The New York Times has become.

Now let’s proceed to the college whose women’s team Thomas swims for, the University of Pennsylvania, and the colleges that have competed against Penn—Cornell and Harvard.

Like virtually every other university in America, and every other Ivy League college, the University of Pennsylvania threw its women swimmers under the bus. Not only did it not side with the women swimmers, nearly all of whom, according to reports, felt cheated when Thomas beat them in every race they competed, but it had no reaction to Thomas displaying male genitals in the women’s locker room.

As reported in the Daily Mail:

‘We’re uncomfortable in our own locker room.’ Lia Thomas’ UPenn teammate tells how the trans swimmer doesn’t always cover up her male genitals when changing and their concerns go ignored by their coach …

‘It’s definitely awkward because Lia still has male body parts and is still attracted to women,’ one swimmer on the team told Daily Mail … Lia has told her teammates that she dates women.

‘While Lia covers herself with a towel sometimes, there’s a decent amount of nudity,’ the swimmer said. She and others have had a glimpse at her private parts.

She stated that team members have raised their concern with the coach, trying to get Thomas ousted from the female locker room, but got nowhere.

‘Multiple swimmers have raised it, multiple different times,’ the UPenn swimmer said. ‘But we were basically told that we could not ostracize Lia by not having her in the locker room and that there’s nothing we can do about it, that we basically have to roll over and accept it, or we cannot use our own locker room.’

‘It’s really upsetting because Lia doesn’t seem to care how it makes anyone else feel,’ the swimmer continued. ‘The 35 of us are just supposed to accept being uncomfortable in our own space and locker room for, like, the feelings of one.’

The school released a terse statement last month that it was offering mental health services to student-athletes.

Of course, neither Cornell nor Harvard defended their women either.

And those women dare not speak out. They know their futures could be destroyed if they did. As one Penn swimmer told the Daily Mail, “I might go on the record, but I’m definitely a little afraid. What I’m afraid of is that potential employers will Google my name and see commentary about things I said and think, ‘Oh, this person’s transphobic.'”

However, just in case some brave women were considering speaking out, the Daily Mail reported that the University of Pennsylvania is “prohibiting students from talking to the media.” One assumes Harvard and Cornell did the same.

In the meantime, the woke cowards of the Ivy League released this statement:

The Ivy League reaffirms its unwavering commitment to providing an inclusive environment for all student-athletes while condemning transphobia and discrimination in any form.

Ironically, Thomas has rendered us a service. She has helped clarify the moral and intellectual state of the Ivy League and The New York Times, two formerly respected institutions. But, of course, that was a long time ago.