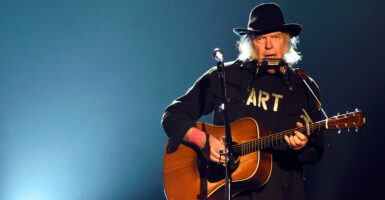 Spotify is facing a musical mutiny.

Joni Mitchell and The E Street Band’s Nils Lofgren have joined fellow classic-rock musician Neil Young in pulling their music off the platform because they don’t agree with controversial podcast host Joe Rogan.

In a since-deleted open letter to Young’s management and record labels posted online, the singer-songwriter wrote: “I want you to let Spotify know immediately TODAY that I want all my music off their platform. They can have Rogan or Young. Not both.”

Spotify rightfully refused to comply, and all of Young’s solo music is no longer available on the platform.

On Sunday, Rogan himself responded to the criticism from the “Heart of Gold” singer in a video posted to his Instagram. Rogan apologized to Spotify for causing issues and said, “I’ve never tried to do anything with this podcast other than just talk to people and have interesting conversations.”

Rogan is no stranger to controversy and is frequently accused of spreading COVID-19 misinformation on his show. The radical left and their corporate media allies view Rogan’s willingness to interview those with views different from the mainstream dogma as a threat, and endlessly push to get him canceled.

Earlier in January, YouTube took down clips of an interview Rogan conducted with a virologist and immunologist, Dr. Robert Malone. Although YouTube didn’t explicitly cite COVID-19 misinformation as its reason for removing the clips, Malone is deeply critical of government lockdowns and mandates, which has drawn the ire of the tech czars at YouTube in the past.

Thankfully, Spotify so far has refused to kowtow to the mob, but Young’s gambit forced the company to respond. That response leaves questions as to how long Spotify can hold out against a barrage of illiberal rock stars. That problem becomes worse if rumors pan out that younger artists like Dave Grohl or Taylor Swift join Lofgren, 70; Young, 76; and Mitchell, 78. An exodus of younger artists could cause the platform’s youthful base to leave as well.

In a press briefing Sunday, Spotify CEO Daniel Ek wrote: “We know we have a critical role to play in supporting creator expression while balancing it with the safety of our users. In that role, it is important to me that we don’t take on the position of being content censor while also making sure that there are rules in place and consequences for those who violate them.”

The implications of this statement are dire. These are words that could very well lead Spotify down the same path as Twitter and YouTube, unelected technocratic arbiters thrust into the role of public safety officers.

That seems to be the role that Tedros Ghebreyesus, director-general of the World Health Organization, has in mind for Spotify. Ghebreyesus tweeted his support for Young, writing: “Public and private sector, in particular social media platforms, media, individuals – we all have a role to play to end this pandemic and infodemic.”

Young, now with the backing of the largest international health organization on the planet, is yet another leftist voice hellbent on canceling someone he doesn’t like.

But unlike the plethora of petty tyrants who demand conformity from Rogan, Young is betraying his own hippie brand in his calls for censorship.

It is deeply ironic that the man who wrote the hit “Ohio” to condemn the 1970 Kent State shootings, the so-called Godfather of Grunge, a genre defined by emphasizing individual liberty, would demand strong corporate action to shut down an opinion he finds odious.

Young went from raging against The Man to becoming The Man.

What matters here is not how many hypocritical and washed-up artists rally to demand that Spotify dump Rogan.  What matters is how Spotify responds. Rogan will continue to cause the platform some headaches, that’s a given.

But the platform has a real opportunity to take a stand for free speech in a world that desperately needs it.

Rogan is the voice and Spotify his microphone. The company must stand strong against the horde of vicious, anti-freedom leftists baying for blood.

Even if ol’ Neil and his ilk no longer do, Spotify should keep on rockin’ in the free world.