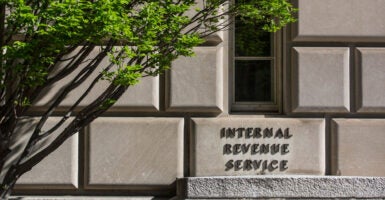 New IRS procedures require taxpayers to give a private company a copy of their government-issued photo ID—as well as their email address, phone number, Social Security number, and a video selfie—before they can gain access to basic tax services on the IRS website. Pictured: the IRS building in Washington, D.C., April 15, 2019. (Photo: Zach Gibson/Stringer/Getty Images)

This supposed “threat to our democracy” is so grave that Biden equated those who support the laws with overt racists like Bull Connor and George Wallace.

But if the president thinks checking IDs and verifying voter rolls is racist, how can he condone the new IRS procedures requiring taxpayers to give a private company a copy of their government-issued photo ID—as well as their email address, phone number, Social Security number, and a video selfie taken with a smartphone or computer—before they can gain access to basic tax services on the IRS website? Is Biden’s IRS engaging in “Jim Crow 3.0”?

Actually, the IRS’ demands of taxpayers smack more of dangerous Big Brotherism than racism. For example, if ID.me, the Virginia-based company being entrusted with taxpayers’ private information, is unable to verify users’ identity with the information, users will then have to join a video call with a “trusted referee” to “answer a few questions.”

ID.me will use the video selfies—which all users must provide—to collect biometric data, including voiceprints and facial geometry recognition. Taxpayers must sign a consent form for the company to collect this data, and the form allows ID.me to “reserve the right to change or modify this Biometric Consent.”

Many taxpayers won’t fully understand what information is being collected or how it will be used. How many people read all the consent forms they sign? Even if they do, taxpayers may have no choice but to consent if they need to access their online account, get their tax records, or update their child tax credit information.

Americans’ ability to interact with government for basic tax services will be filtered through a secret private algorithm. All told, the new system will determine taxpayers’ access to services that were used an estimated 60 million times last year. The IRS website also states that over the next year, additional IRS applications will transition to the new system.

In other words, in the name of protecting taxpayer information, the IRS will compel even more taxpayers to give away extremely personal information to a private company.

The IRS has a poor track record of safeguarding taxpayer information, and Americans should be incredulous of the idea that sharing more data will ensure their information remains private.

In June 2021, ProPublica—a left-leaning news organization that somehow received private tax documents—released a report leaking information on the tax records of dozens of the wealthiest U.S. taxpayers. Nobody has been held accountable for the apparent felonious data leak or data breach, nor is it clear how many taxpayer records were exposed.

Making a private company a gatekeeper to certain taxpayer information hardly guarantees such information is safe from future leaks or breaches. In 2017, the personal information of 147 million Americans was exposed when Equifax experienced a data breach.

Also consider the difference between how state voting laws come about compared to the IRS’ new procedures.

States that enact voter ID requirements or change other election laws must do so through the standard legislative process: duly elected representatives passing laws that are subject to all the legal checks and balances.

Yet Biden’s IRS will require sensitive taxpayer data to access basic tax functions with no new laws passed and no elected officials accountable for the change.

Which is more undemocratic?

The Biden IRS has consistently sought more power, whether through the legislative process or not. Last fall, the Treasury Department pushed to allow the IRS to track the bank transactions of virtually all Americans, but the effort stalled when it was met with public outcry.

The Build Back Better Act would have nearly doubled the size of the IRS, adding 87,000 new agents mostly dedicated to enforcement. The unpopularity of provisions like this ultimately led the Senate to balk at the House version of the bill.

In the case of the new facial recognition requirements, though, the IRS is acting outside the legislative process, flexing its own power by imposing new information-sharing requirements on taxpayers.

When agencies like the IRS exert the power to trample on taxpayer privacy, it exposes the ever-increasing power of the executive branch, an actual flaw in the functioning of our democratic republic. In Biden’s words, “That’s the kind of power you see in totalitarian states, not in democracies.”