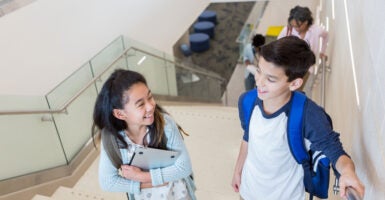 Liv Finne is director of the Center for Education Reform at the Washington Policy Center in Washington state.

Editor’s note: Jan. 23-29 is National School Choice Week. This is the last of a five-part series of commentaries exploring the successes and challenges of educational choice and the people fighting to make it available to all American schoolchildren.

As we conclude National School Choice Week 2022, people around Washington state are about to hear a familiar refrain: Public schools need more money.

In a world of online misinformation and fact-checking, it’s more important than ever for the public to get an accurate picture.

Citations to these official figures are provided by the Center for Education Reform of the Washington Policy Center’s new study “Public Education Spending: Where Does the Money Go? Trends in Teacher Salary and Benefits Costs in Washington Public Schools, 2015-2021.”

Total annual school funding in the current budget is $17.5 billion, the highest ever. Average per-student funding is $16,800, the highest ever and more than the tuition at most private schools. A modest-sized classroom of 25 students receives an average of $420,000 a year. Even if the teacher receives $120,000 in pay and benefits, a level that is now typical, schools have plenty of money to fund learning services.

Some 83% of public school spending goes to pay and benefits for employees. Fewer than half, about 43%, of school employees are actual classroom teachers.

In recent state budgets, Washington lawmakers have directed billions of dollars in increased funding to the K-12 schools. Much of that has gone to administration and programs other than core academics.

Over the past six years, from 2015 to 2021, Washington taxpayers provided an increase in school employee compensation and benefits of 29%. For comparison, consumer inflation over the same period rose by 18%. An average teacher salary in Washington state is now just under $90,000 a year, with an additional $30,000 for health coverage, retirement, paid leave, and other benefits.

In addition, Washington state public schools received $2.9 billion from federal taxpayers as part of the COVID-19 relief packages. Research shows that, nationally, school officials have only used about 10% of those funds, even though school leaders claimed the needs were urgent during the pandemic.

At the same time, academic outcomes for students are flat or declining.  Nearly one-fifth of public school students drop out before completing high school, and the racial achievement gap among students is wider than ever.

The debate over critical race theory is sparking renewed controversy, and some public figures actually say parents should not be involved in their children’s education at all.

A deeper problem is that the public sees that none of the many promises made over the years to gain political support for public education funding have come true, and in the past year alone, some 41,000 families have left the system. Some have gone to charter schools, a relatively new phenomenon in Washington state.

Public charter schools are a popular form of school choice delivering quality results, for about $3,000 less per year per student. Washington has 14 public charter schools, currently serving about 4,000 students—mostly from low-income, minority families.

Unfortunately, just as taxpayers provide the highest level of funding to assigned schools in state history, the growth of charter schools is being limited by powerful special interests, such as teachers unions.

Washington taxpayers are generous in funding the public education system, particularly for teacher salaries and benefits. The figures reported here are on an annualized 12-month basis, even though many teachers only work a 10-month year.

These findings show that adding more money to the current public education system will not improve learning outcomes for students, reduce the high dropout rate, or close the long-standing achievement gap.

Instead, policymakers should focus on increasing learning alternatives and parental choice. School choice is increasingly popular among state residents, while harmful ideas such as critical race theory obviously are not.

State lawmakers should focus on student-centered innovations, not simply increasing funding amounts, if they want to ensure that every child living in Washington state has access to a great education.