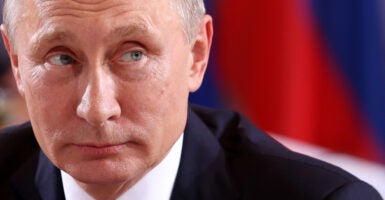 With Russian troops massed on the border with Ukraine, will recent history repeat itself? Russian President Vladimir Putin is seen here attending a meeting on the Ukrainian peace process on Oct. 19, 2016, in Berlin. The leaders of Russia, Ukraine, France, and Germany met in Berlin to discuss implementation of the peace plan for resolving the conflict in Ukraine after Russian forces invaded in 2014 and annexed the peninsula of Crimea. (Photo: Adam Berry/Getty Images)

Americans want an autonomous Ukraine to survive. They hope the West can stop Russian President Vladimir Putin’s strangulation of both Ukraine and NATO.

Yet Americans do not want their troops to venture across the world to Europe’s backyard to fight nuclear Russia to ensure that Ukraine stays independent.

Most Americans oppose the notion that Russia can simply dictate the future of Ukraine.

Yet Americans also grudgingly accept that Ukraine was often historically part of Russia. During World War II, it was the bloody scene of joint Russian-Ukrainian sacrifices—more than 5 million killed—to defeat the Nazi German invasion.

Yet most Americas privately worry that NATO has become diplomatically impotent and a military mirage, a modern League of Nations.

NATO members have a collective gross domestic product seven times larger than Russia’s. Their aggregate population is 1 billion. Yet the majority will not spend enough on defense to deter their weaker enemies.

The second-largest NATO member, Turkey, is closer to Russia than to the United States. Its people poll anti-American.

Germany is NATO’s richest European member and the power behind the European Union. Yet Germany will soon be dependent on imported Russian natural gas for much of its energy needs.

In a recent Pew Research Center poll, 70% of Germans voiced a desire for more cooperation with Russia. Most Americans poll the exact opposite.

Worse, 60% of Germans oppose going to the aid of any NATO country in time of war. Over 70% of Germans term their relationship with the United States as “bad.”

We can translate all these disturbing results in the following manner: The German and Turkish people like or trust Russia more than they do their own NATO patron, America.

They would not support participating in any NATO joint military effort against even an invading Russia—even, or especially, if spearheaded by an unpopular United States.

So, assume that NATO’s key two members are either indifferent to the fate of nearby Ukraine or sympathetic to Russia’s professed grievances—or both.

Indeed, most Americans fear that if Ukraine ever became a NATO member, Putin might be even more eager to test its sovereignty.

Putin assumes that not all NATO members would intervene to help an attacked Ukraine, as required by their mutual defense obligations under Article 5.

If they did not, Putin could then both absorb Ukraine and unravel the NATO alliance all at once.

There are more complications in the Ukrainian mess.

Putin knows that the secretary of defense and chairman of the Joint Chiefs of Staff appear more worried about “white privilege” and climate change than enhancing military readiness to deter enemies such as himself.

Putin sees polls that only 45% of Americans have confidence in their new politicized military.

The flight from Afghanistan, Putin further conjectures, has made the United States both less feared by enemies and less trusted by allies.

The prior failed American policy of Russian “reset,” the appeasement of Putin’s aggressions during the Obama years, together with the concocted hoax of “Russian collusion,” have all variously emboldened—and angered—Putin.

Trump’s now-rejected agenda was to increase American and NATO defenses, and pump oil and gas to crash the global price of Russia’s chief source of foreign exchange.

Putin was once furious that Trump unilaterally left an asymmetrical U.S.-Russia missile accord. Trump ordered lethal force to be used against large numbers of Russian mercenaries who attacked a U.S. installation in Syria. He sold offensive weapons to Ukraine. He acted forcibly in taking out terrorist enemies such as Iranian Gen. Qassem Soleimani, the Islamicist Abu al-Baghdadi, and ISIS itself.

With Putin’s nemesis, Trump, gone, Russia assumes the appeasement years of the Obama-Biden Administration are back again. As in 2014, once more Putin is moving against his neighbors.

Finally, there is the unfortunate role of recent Ukrainian government officials. Some were deeply involved in greenlighting the Biden family grifting and profiteering to ensure massive American foreign aid.

Some Ukrainian expatriates and current government members worked with the American left to ensure the first impeachment of Trump.

Now Ukrainians are exasperated that their prior intrusions into domestic American politics have backfired with the disastrous Biden presidency—and his apparent de facto acceptance of an inevitable Russian annexation.

Where does this entire mess leave America?

Putin is undermining a sovereign nation, fissuring NATO, and, if successful, might continue the Ukraine slow-squeeze model in the Baltic States and elsewhere.

Meanwhile, China smiles, hoping the Ukraine blueprint can be used against Taiwan.

Exasperated Americans fear that Putin will be deterred neither by sanctions, nor by arms sales, but follows only his own sense of cost-to-benefit self-interest.