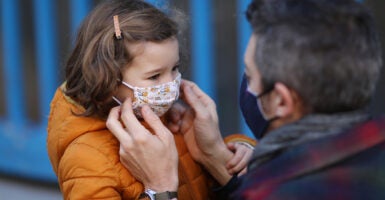 Virginia Gov. Glenn Youngkin signed an executive order giving parents the choice of whether or not their child should wear a mask at school. Now, seven Virginia school divisions are suing the governor over the order. (Photo: Catherine Delahaye/Getty Images)

A new Republican governor is trying to return power to the hands of parents in his state.

On his first day in office on Jan. 15, Virginia Gov. Glenn Youngkin signed an executive order giving parents the choice about whether or not their child should wear a mask at school. Now, seven Virginia school districts are suing the governor over the order.

In a joint statement Monday, the school districts wrote, “Today’s action is not politically motivated. These seven school divisions would welcome the opportunity to collaborate with the governor to ensure the safety and welfare of all students.”

Youngkin spokesperson Macaulay Porter says Virginia’s executive branch will fight the lawsuit and remains committed to “defending parents’ fundamental right to make decisions with regard to their child’s upbringing, education, and care, as the legal process plays out.”

On today’s edition of the “Problematic Women” podcast, we discuss whether parents should have the right to decide whether their children wear a mask to school.

Also on today’s show, musician Damon Albarn says Taylor Swift does not write her own songs. Now Swift is firing back. Plus, a biological male who identifies as transsexual is standing up for women’s rights to fairness in sports. And as always, we crown our “Problematic Woman of the Week.”