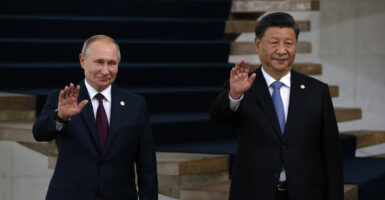 One dangerous response to the Ukraine crisis is that the U.S. should make nice with the Russians so they can help, or at least not distract from, dealing with the threat from China. Pictured: Russian President Vladimir Putin and Chinese President Xi Jinping wave during a welcoming ceremony for the BRICS Leaders Summit in Brazil on Nov. 14, 2019. (Photo: Mikhail Svetlov/Getty Images)

One dangerous response to the Ukraine crisis is that the U.S. should make nice with the Russians so they can either help, or at least not distract from, dealing with the threat from China, or at the very least find a way to keep Moscow and Beijing from ganging up on the U.S.

This is an approach that is doomed to fail, and will do nothing to enhance the safety and security of the American people.

There are four big reasons why Russia and the West could never team up to deal with China.

First, Russia and China’s goals in Europe are identical. They want a weakened and divided Europe that both can exploit. They both want to eclipse the U.S. partnership with Europe so that the free world is divided and more vulnerable. Russia won’t help the U.S. work against this most basic Russian interest.

Second, nothing since coming to power in 1999 shows that Russian President Vladimir Putin can be a trusted partner for the West. Putin has spent more than two decades trying to undermine the U.S. and its allies at every turn.

Policymakers must operate in the world they are in and not in the world they want to be in. Simply put, Russia under the leadership of Putin can never be a reliable partner for the West and there is no reason to assume why cooperation on China would be any different.

Third, Russia will always prioritize its resources and energy on Europe—not Asia. Even though it spans two continents, policymakers and political elites see Russia as a European power first and foremost. This is why the Kremlin meddles in places like Belarus or Ukraine. It knows that without influence or outright control of Minsk or Kyiv, Russia is merely an Asian power and not a European one.

During the 2005 State of the Nation address to the Russian parliament, Putin said, “We should acknowledge that the collapse of the Soviet Union was the major geopolitical disaster of the 20th century.” Regaining the lost influence, control, and territory in Central and Eastern Europe since the 1990s has formed the basis of Russian foreign and defense policy since Putin came to power. This will not change.

Major Chinese investments in Russia’s oil and natural gas facilities have served as an important lifeline for Moscow. Major gas pipelines linking Russia to Chinese markets have been constructed. The details for the Power of Siberia-2, a new natural gas pipeline connecting Russia’s Yamal Peninsula (where much of Europe’s gas comes from) to China’s Xinxiang region (where the native Uyghurs are a victim of genocide) is expected to be finalized later this year.

Last year, trade turnover between the two was almost $147 billion, up 36% from the year before. By 2024 both sides aim to hit $200 billion in trade turnover. Moscow would never pursue a policy with the U.S. against Beijing that would jeopardize this economic lifeline.

Even though Russia is the junior partner in its bilateral relationship with China, its relations with Beijing are too cozy right now to expect any fundamental shift. The one area where Russia and China compete for influence is in Central Asia. But in this region, the U.S. has all but disengaged and has no leverage to use, nor any strategic interests.

Furthermore, after Russia’s recent intervention into Kazakhstan to prop up President Kassym-Jomart Tokayev, Moscow is now the dominant player in the region, and Beijing knows this.

How to Divide Beijing and Moscow

The way to lessen the threat of the partnership between Russia and China is to make them less valuable to each other.

Russia only has two assets that gives it real influence—military force and energy. NATO needs to strengthen its conventional and strategic deterrence. That means every NATO nation must do its fair share and the U.S. should ramp up its contribution to forward presence.

Meanwhile, the West needs to get serious about energy security. It needs to deliver affordable, reliable, abundant energy without leaning on gas and oil from Russia. Without military and energy leverage, Russia is checkmated, and a less valuable partner for Beijing.

Meanwhile, the U.S. should press back on China across the board, stand with our allies from Lithuania to Australia, confront its transgressions in the South and East China Seas and in the Taiwan Strait, tighten its access to American developed technology, and continue to put the force of the American economy behind our concerns for China’s violations of its people’s God-given rights.

Washington should also work with its close allies in the region—Japan, Australia, and South Korea—to improve defense cooperation and invest in the U.S. military to improve its ability to successfully deter Chinese aggression.

The less capacity Moscow and Beijing have to worry the West, the more they are actually likely to turn on each other squabbling over the scraps of what they can grab to sustain their influence.