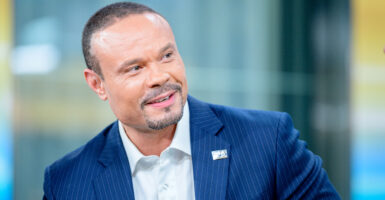 Radio and TV talk show host Dan Bongino, seen here on the Fox News Channel on June 18, 2019, told off YouTube after it permanently banned him and took his videos to Rumble instead. (Photo: Roy Rochlin/ Getty Images)

Bongino’s second channel, the Dan Bongino Show Clips, was initially suspended and demonetized for seven days after Bongino posted a video in which he said masks were “useless” in stopping the spread of the coronavirus, violating YouTube’s COVID-19 misinformation policy. Bongino then attempted to upload a video within the seven-day suspension period on his main channel, resulting in a permanent ban for both accounts, a YouTube spokesperson confirmed to the Daily Caller News Foundation.

Bongino’s ban was first reported by The Hill.

Bongino will not be able to create a new YouTube account in the future, the spokesperson said. The talk show host’s main account had 900,000 subscribers at the time of its deletion, according to The Hill.

“If a channel is terminated, the uploader is unable to use, own, or create any other YouTube channels,” the spokesperson said.

“Hilarious watching the @YouTube communists desperately try to save face after we told them to go f%^* themselves,” the account tweeted. “They’re claiming we ‘tried to evade suspension.’ Really? By posting a final video LITERALLY titled ‘Why I’m Leaving YouTube’?”