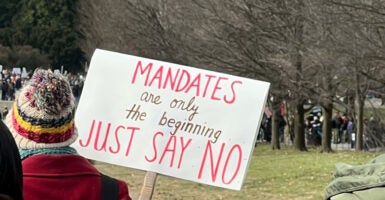 Thousands of people descended on Washington, D.C., on Sunday to demonstrate their opposition to vaccine mandates and to demand the right to choose what they put in their bodies. (Photo: Taylor Dabney/The Daily Signal)

Tens of thousands of people flooded the streets of the nation’s capital on Friday and again on Sunday to stand for life and protest government overreach.

Despite temperatures being well below freezing Friday, busloads of students, church groups, and other Americans from across the county poured into Washington for the 49th annual March for Life.

Many in the pro-life movement gathered in hopes that this will be the last March for Life before Roe v. Wade, the landmark 1973 ruling legalizing abortion nationwide, is overturned. The Supreme Court is expected to rule on the case of Dobbs v. Jackson Women’s Health Organization in June, and could overturn Roe and send authority back to the states to determine abortion laws.

The Daily Signal spoke with a number of the marchers, including some individuals who at one time worked in the abortion industry.

The Daily Signal also attended the march against vaccine mandates on Sunday and spoke with several women who have lost, or may lose, their jobs because they don’t want to take the COVID-19 vaccine.

On today’s episode of “Problematic Women,” we share several of the conversations we had with women at the March for Life and at the march against vaccine mandates. These are women who are dedicated to being a voice for the unborn and for pushing back against authoritarianism and totalitarianism.