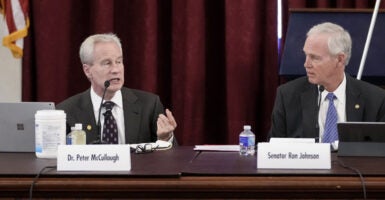 "There is not a single hospital in America that is holding itself up as a center for excellence for treating COVID-19," says Dr. Peter McCullough, speaking Monday at a panel of medical doctors and scientists convened on Capitol Hill by Sen. Ron Johnson, right, to talk about alternative treatments of COVID-19. (Photo: Drew Angerer/Getty Images)

Dr. Robert Malone became widely known recently for being banned on Twitter and for an interview on “The Joe Rogan Experience” podcast diverging from the prevailing view on COVID-19.

“I’m speaking to you not only as a physician and scientist, but also as a father and grandfather. I’m also a COVID survivor. In my opinion, we should never have politicized the public health response to COVID-19,” Malone said Monday on Capitol Hill.

“This is a bipartisan issue. I know I’ve been characterized as a right-wing Proud Boy,” the medical doctor said, “[but] I’ve previously supported both President [Barack] Obama’s and President [Joe] Biden’s campaigns.”

Malone, a virologist and immunologist who specializes in mRNA technology used in the vaccines, spoke during “COVID-19: A Second Opinion,” an event featuring doctors and scientists sponsored by Sen. Ron Johnson, R-Wis., to focus on alternative treatments beyond vaccinations.

Malone noted a high rate of infection caused by the omicron variant of COVID-19 among the vaccinated population. So, he said, “mandating these vaccines makes no sense.”

The Centers for Disease Control and Prevention defines mRNA as a type of vaccine that causes cells to make proteins that will trigger an immune response inside the body.

The Moderna and Pfizer vaccines for COVID-19 are both mRNA types, but the Johnson & Johnson vaccine is not.

“Even if every man, woman, and child were vaccinated, they cannot achieve herd immunity,” Malone said. “Furthermore, they are not completely safe. The full nature of the risks remain uncharacterized. Usually it takes us many years to fully understand the risk of vaccines. If there is risk, there must be choice.”

Johnson’s forum at the Russell Senate Office Building featured doctors from across the country who favor alternative treatments such as the drugs ivermectin and hydroxychloroquine.

The Wisconsin Republican noted that there have been 889,000 deaths in the United States so far related to COVID-19, and the U.S. ranks 22nd in the world in deaths per million, at 2,575.

He said that by comparison, Sweden—excoriated by the world press for not locking down—ranked 63rd in deaths per million, with 1,514.

“We invited folks from the other side [of the debate at] the federal health agencies and the CEOs and representatives of the vaccine manufacturers,” Johnson said of his event. “They decided not to show up. That is somewhat telling, but also very disappointing.”

The press release for the event noted that top Biden administration health officials from the Centers for Disease Control and Prevention, the Food and Drug Administration, and the National Institutes of Health had been invited.

Also invited was the increasingly controversial Dr. Anthony Fauci, director of the National Institutes for Allergy and Infectious Diseases.

Dr. Ryan Cole, of Garden City, Idaho, recalled getting a call one day from a patient who was certain he had COVID-19.

“He said, ‘I have excruciating pain in my lungs.’ So I said, ‘You’re going to the pharmacy. Don’t go to the ER,’” the CEO of Cole Diagnostics recalled telling his patient.

“Six hours later, he called to say his excruciating lung pain was now a 2 out of 10 instead of a 9 out of 10,” Cole said. “The next day, he calls and says the pain is down by 80%. That individual is my brother.”

Dr. Peter McCullough, an internist who attended, published one of the first pieces about early treatment of COVID-19 in the American Journal of Medicine. McCullough talked about what he said should be the four pillars of responding to the disease caused by a previously unseen coronavirus.

“The first is to limit the spread of the virus,” McCullough said. “We quickly learned that this was a virus that spread from someone who was sick with symptoms to someone who was susceptible and acquired the infection.”

“Pillar No. 2 is the pillar of early treatment,” he said later. “I think everyone in this room can understand there are only two bad outcomes from COVID-19: hospitalization and patient death.”

McCullough said most people can be infected by the virus and survive it, but vulnerable populations, including those with preexisting conditions and the elderly, could die.

“The third pillar is hospital care,” he said. “To this day, there is not a single hospital in America that is holding itself up as a center for excellence for treating COVID-19. There is no hospital that has an early treatment program or even has the continuity of care of patients going from the inpatient to the outpatient [status].”

Finally, McCullough added, “The fourth pillar is vaccination. Vaccination as we see it today has been the central effort of our federal COVID-19 response.”

The Supreme Court earlier this month struck down the Biden administration’s vaccine mandate for private employers with 100 or more employees, but upheld a separate mandate for employees of health care facilities that receive money from Medicare or Medicaid.

When the discussion turned to masks, Steve Kirsch, a Silicon Valley philanthropist who founded the COVID-19 Early Treatment Fund, displayed an awkward-looking mask that he said would be the only one 100% effective against the virus.

Kirsch referenced research showing a lack of effectiveness for cloth and surgical masks, and that the highly touted N95 masks were only nominally more effective.

Providing some levity during the panel, Johnson quipped: “I’m afraid the Biden administration just might require it.”

Prompting laughter from the audience and the panel, Kirsch responded: “If they were really serious about protecting the American public, they would require everyone to wear this, in which case everyone would rebel and we would have no mask mandates.”

Dr. Pierre Kory, a pulmonary and critical care specialist who is a former associate professor at the University of Wisconsin, blamed cozy relations between the pharmaceutical industry and the government for a poor response to the pandemic that he says continues.

Things like not testing the vaccinated, things like not recommending vitamin D, not checking vitamin D levels, some of the things [that are] so fundamental and basic about medicine. I’m calling attention to the corruption. These innumerable failed policies, they are literally written by the pharmaceutical companies. Every single policy serves the pharmaceutical companies. Outside the United States, look around the world, there have been numerous successes.