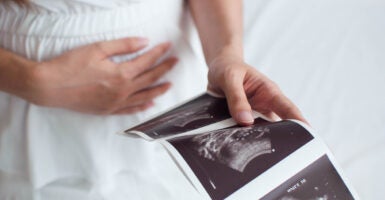 Thanks to scientific advances like ultrasound, which was still in the early stages of development when Roe v. Wade was decided, we know that babies have heartbeats by six weeks. This level of detail in understanding the unborn was unheard of in 1973. (Photo: Karl Tapales/Getty Images)

Bernadette Tasy led the Students for Life chapter at Fresno State University from 2016-19. She now advocates for the pro-life cause at Alliance Defending Freedom.

My generation has never seen an America without Roe v. Wade. Since 1973, an estimated 60 million unborn children have been killed in the womb by abortion.

Though the pro-life movement has remained steadfast in standing for the truth that every human life is valuable, scientific developments over the last few decades have only given young Americans more reasons to defend the unborn.

Thanks to scientific advances like ultrasound, which was still in the early stages of development when Roe was decided, we know that babies have heartbeats by six weeks, are fully formed at 12 weeks, and can feel pain in the womb at least by 20 weeks. In the second trimester, a baby can move and kick, sense movement outside her mother’s womb, and has eyes and eyelids that are beginning to open. She can even hiccup.

This level of detail in understanding the unborn was unheard of in 1973. Science changes, and our culture is changing along with it.

I led a Students for Life chapter while attending Fresno State University, and when I wasn’t busy working with my attorneys at Alliance Defending Freedom to stop a professor from trying to silence me and my student organization, I had the opportunity to speak with hundreds of students who expressed a view of abortion that isn’t anywhere close to what is reflected in the Roe decision. While opinions on abortion varied, most agreed that the decision was a mistake.

It seems that has not changed. I recently spoke to several students at Ole Miss University in Mississippi, the state that has asked the U.S. Supreme Court to protect the health of pregnant mothers, the integrity of medical professionals, and the dignity of the unborn by allowing it to limit abortions at 15 weeks gestation.

The students on the campus were shocked when they learned that America allows abortion through all nine months of pregnancy. When presented with simple facts about the unborn at 15 weeks gestation and images of ultrasounds from both the 1970s and now, they, too, agreed that our country’s abortion laws—or lack thereof—are extreme.

My generation and the generations that follow are standing on the shoulders of science and, ultimately, standing for the lives of the unborn.

Today, the 49th annual March for Life is taking place in Washington, D.C., hosting hundreds of thousands of people, as it does every year, to witness the truth surrounding the greatest human rights violation of our time. If you’ve ever participated in that march, you know that a large portion of the attendees are teens and young adults like me.

And these teens and young adults take their passion back to their communities. Planned Parenthood Generation Action’s 350 chapters can’t hold a candle to Students for Life of America’s 1,200 chapters across the nation, and one quick look at their respective websites shows a stark contrast in priorities.

The abortion industry rejects the idea that all human beings deserve the right to live. It dismisses stories of success, like my friend Jessica Riojas, who had a child as a single, poor college student, raised her while earning her master’s degree, and now works as a successful speech language pathologist.

Those promoting abortion condemn laws that protect a woman’s right to be given all necessary information before undergoing a serious procedure with permanent consequences. They claim that “unwanted” children will never be adopted—that they are better off dead.

But young, pro-life individuals know that life is a human right. We know that women can be successful without abortion. And we know that there’s no such thing as an unwanted child—especially given the fact that there are at least 1 million couples waiting to adopt in America at any given time.

The pro-life movement is winning, and my generation is ready to turn the page on Roe v. Wade.