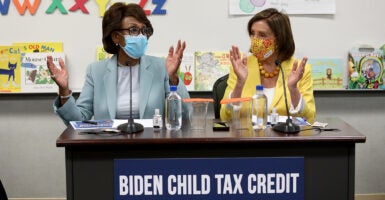 From that lens, it’s unsurprising that some choose to renew the tax breaks, even though it goes against a fundamental principle of prohibiting government from picking economic winners and losers.

But conservative members of Congress must recognize that if the federal government stays on its current path—having accumulated $6.6 trillion of new debt in the last two years alone—they’ll get the worst of both worlds. Unsustainable budget deficits will wrongly push Congress to dramatically increase taxes while the U.S. tax code remains littered with tax breaks for a favored few.

The best of both worlds is also possible—if Congress will act quickly to stop America’s fiscal problem at the source. Congress can do this by curtailing runaway federal spending and making necessary reforms to entitlement programs. Ultimately, that’s the only way to prevent disastrous tax increases that are looming for nearly every working American if we remain on our current trajectory.

But in the meantime, Congress should not renew the temporary tax credits that expired in late 2021. Every tax credit that Congress extends to a chosen few ensures that every other taxpayer will be stuck paying more.

There are 25 temporary tax credits that expired in late 2021, including temporary expansions of existing credits. Some of the tax credits originated with the 2020 Coronavirus Aid, Relief, and Economic Security (CARES) Act or the 2021 American Rescue Plan Act. Other “temporary” tax credits have their roots in Great Recession-era stimulus bills.

If history repeats itself, Congress will consider retroactively renewing many of these tax credits for one or more years.

Before I continue, it’s worth highlighting the difference between tax deductions and tax credits, as tax credits are much more likely to be problematic.

Most tax credits create major economic distortions by pushing individuals and businesses into economic decisions just for the large tax benefits they can receive.

Tax credits are usually arbitrary, with amounts, percentages, and limits set by policymakers making finger-in-the-wind judgments with little to no economic basis. Because tax credits are haphazardly created, they are easily manipulated and are a favorite tool of lobbyists and policymakers with a penchant for central planning.

The tendency for Congress to increase, decrease, and extend tax credits based on who’s holding the political football creates even more economic distortions, as businesses and individuals time purchases or other economic decisions to maximize their credits.

James Madison pointed out legislatures’ temptation to use tax policy to the advantage of the political majority when he wrote, “Every shilling with which they overburden the inferior number is a shilling saved to their pockets.”

Congress should stop abusing the tax code and should not extend any of the 25 expiring tax credit provisions.

Taken together, credits like these misallocate private resources and distort the energy market. Companies invest resources into impractical technologies that the government artificially props up, while shifting resources away from other more efficient and productive options.

Other expiring tax credits distort other parts of the economy, including housing, building construction, wages, and health insurance markets.

The most contentious expiring credit, though, is the 2021 expansion of the child credit. These are more accurately described as child cash grants, since most of the payments went to parents who owed no taxes.

The child credit that was in place prior to 2021 did not expire, only the expanded grant did. Therefore, it’s set to revert back to a $2,000 per-child credit, instead of the $3,000 ($3,600 for children under 6 years old) amount that applied in 2021. Unless the 2021 expansion is renewed, limits will also be reinstated on the amount of tax “refunds” that will be paid out to individuals who pay no income tax.

Extending the expanded child credit would cost roughly $100 billion per year in new deficit spending. It would be irresponsible and counterproductive for Congress to add to our current deficit as the Federal Reserve is struggling to contain inflation. Furthermore, since the 2021 child credit policy dropped work requirements and paid people who didn’t work, extending it would only exacerbate the labor shortage that’s holding back the economy and further contributing to rising prices.

In general, temporary tax credits don’t offer the widespread tax relief that policymakers should seek. Indeed, with $29.7 trillion of debt and counting, unless combined with spending cuts, tax credits merely shift the burden of taxes to all those taxpayers who don’t qualify for them.

Tax credits distort markets by having the government pick winners that it will subsidize and making losers out of the rest, by artificially changing market prices, and by pushing consumers to buy products the government prefers rather than the ones consumers prefer.

Tax credits also allow those individuals and businesses receiving them to avoid the pain of certain taxes, often lulling them into supporting more big government while everyone else is left to pick up an even larger tab.