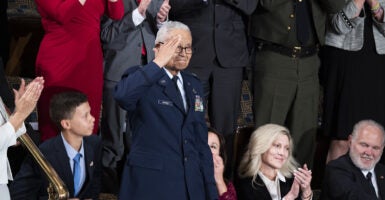 America lost a leader, warrior, and one of its most famous Tuskegee Airmen when Brig. Gen. Charles McGee died in January at the of age of 102. Pictured: McGee is recognized during President Donald Trump’s State of the Union address in the U.S. House Chamber Feb. 4, 2020. (Photo: Tom Williams, CQ-Roll Call, Inc/Getty Images)

Last Monday, our nation lost a leader, warrior, and one of America’s famed Tuskegee Airmen when Brig. Gen. Charles McGee made his last takeoff at the of age of 102.

McGee was born in Cleveland, Ohio, on Dec. 7, 1919, and moved frequently with his father’s work throughout Ohio, Florida, West Virginia, Iowa, and Illinois. Along the way, he entered the Boy Scouts, rose to the rank of Eagle Scout, and was accepted into the engineering program at the University of Illinois.

World War II broke out before he finished his degree, and he enlisted in the Army Air Corps on Oct. 26, 1942. McGee was accepted into a group of African American volunteers who were sent for flight training to Tuskegee Army Air Field in the heart of the segregated South.

Most of the nearly 15,000 volunteers who went to Tuskegee didn’t finish flight school and went on to become navigators, bombardiers, air traffic controllers, and mechanics. Just 932 became pilots, and of those, 355 went on to fly fighters. But they were Tuskegee Airmen, one and all.

McGee earned his pilot’s wings and was commissioned as a second lieutenant on June 30, 1943.

Upon completion of fighter training, he was assigned to the 332nd Fighter Group, which arrived in Italy for combat operations in February 1944. At first, the group flew P-39 airplanes, then P-47s, and finally P-51s—all painted with distinctive red tails and trim that identified them as Tuskegee Airmen.

The group’s mission was to protect heavy bombers that were attacking targets from Italy to Poland, and, on occasion, the group was directed to attack targets of opportunity on the ground.

Its record in both roles became legend, and bomber groups learned quickly that the “Red Tails” would stay with them throughout their missions. Just 27 bombers were shot down during the 179 escort missions the Tuskegee Airmen flew, compared to an average of 46 bombers for the other fighter groups.

And the number of targets the Red Tails destroyed was equally impressive. During escort missions, the group’s pilots destroyed 112 enemy fighters in the air, one of which, a Focke-Wulf 190, was destroyed by McGee himself while escorting a formation of B-17s over Czechoslovakia. The group destroyed another 150 aircraft on the ground, along with 600 rail cars, 350 trucks and other vehicles, and 40 boats and barges.

But the costs were high. One in four Red Tail fighter pilots would be lost in combat—66 were killed in action and another 32 were taken prisoner after being shot down.

At the end of the war, the vast majority of surviving Tuskegee Airmen returned to their civilian lives. But McGee loved the thrill of flying too much to get out of the service, and when the Korean War broke out, he returned to combat duty.

By 1950, the age of jet fighters had arrived, but McGee was assigned to a ground attack squadron flying critical close air support missions in the P-51 Mustang. While the F-86 jets flying air-to-air missions got most of the glory, the risks associated with the air-to-ground role were much higher and Mustang squadrons suffered the heaviest attrition rates—more than double that of any jet fighter.

But it was in those high-risk environments that McGee thrived. He flew 100 combat missions in Korea and was promoted to major.

By the time he went to Vietnam, McGee had pinned on lieutenant colonel and was selected to command and lead the 16th Tactical Reconnaissance Squadron. In that role, he flew 172 combat missions in the unarmed RF-4 photo-reconnaissance aircraft.

By the end of his career, McGee had risen to the rank of full colonel and had amassed 6,308 flying hours and 409 combat missions, ranking him third among all fighter pilots who flew in World War II, Korea, and Vietnam.

In spite of the years of racism and the discrimination he faced throughout his life, his love of America was contagious, and anyone who was graced with his presence came away loving our nation that much more.

Charles McGee was an incredible airman, warrior, and—in every sense—an American hero. He was promoted to the rank of brigadier general by President Donald Trump on Feb. 4, 2020, and received several standing ovations that same night at the State of the Union address for a life incredibly well lived.

Here’s a nickel on the grass for an absolute legend. Godspeed, Gen. McGee.