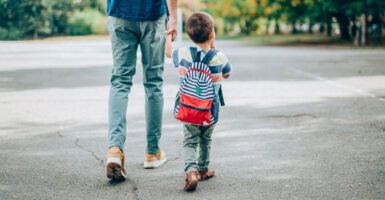 A parents group claims that a Minnesota school district is indoctrinating toddlers about pride and other “equity” agenda items.

Saint Paul Public Schools is partnering with two organizations, AMAZE and OutFront Minnesota, to purportedly push materials discussing gender identity on children as young as 3, according to a release by Parents Defending Education.

One document released by Parents Defending Education from AMAZE included books aimed at preschool-age children, including “When Aidan Became a Brother,” “I Love My Colorful Nails,” and “My Princess Boy.”

The first book is about a young girl who transitions to become a boy, according to AMAZE’s handout. The second book tells the story of how “a boy who loves to paint his nails different colors” is bullied, while the third title is about “a little boy who loves the color pink, sparkly things, and being a princess” and was “written by his mom.”

“Let’s see what she wants us to know about him and his family,” the summary of “My Princess Boy” concluded, according to Parents Defending Education documents.

After a brief description of the books involved, the AMAZE handout also included suggested activities and discussion questions under the heading “Connection to Social-Emotional Learning and Anti-Bias Education.”

Social-emotional learning materials have been “suffused” with critical race theory by a company founded by Attorney General Merrick Garland’s son-in-law, including a deleted course titled “Social-Emotional Learning As A Vehicle For Equity.”

Critical race theory holds that America is fundamentally racist, yet teaches people to view every social interaction and person in terms of race, and whose adherents pursue “antiracism” through the end of merit, objective truth, and the adoption of race-based policies.

Another handout told teachers to “Ask Students for Name and Pronouns” and to “Refer students to the Name/Gender Change Request Form,” according to Parents Defending Education.

OutFront Minnesota’s website includes links to programs that provide free “chest binders” for “folks 24 and under” or for “any trans person who needs one and cannot afford or safely obtain one.”

One of the groups, Point of Pride, offers on its site to ship a free chest binder “to a friend, family member, or another trusted person if you cannot receive it at your house.”

There are multiple lawsuits surrounding school district policies that require teachers to keep parents in the dark regarding the sexual orientation or gender identity of their children, to the point of allegedly starting clandestine social transitions.

“In the most recent round of state testing, 33 percent of St Paul students tested proficient in reading—down 6 points from 2019—and 21 tested proficient in math, down 9 points. It is especially egregious that after more than a year of disruptions and closures, the district is pushing ideologically driven content and resources on students and families,” Erika Sanzi, director of outreach for Parents Defending Education, said in the group’s release.

“It is one thing to treat all students with the dignity they deserve; it is quite another to be so far out of your lane that you are partnering with outside organizations that think it is appropriate to engage toddlers in conversations about gender identity and sexual orientation,” Sanzi added. “How can a school district even defend spending time and money on this ideological garbage when 2/3 of their students can’t read on grade level and 80 percent aren’t proficient in math?”