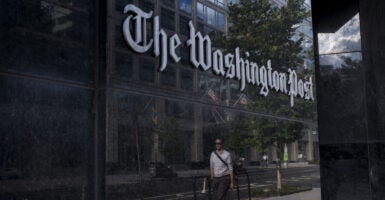 A column by The Washington Post's Ruth Marcus suggested that a top appeals court judge knowingly hired a law clerk who had made a racist remark several years ago. Pictured: A man walks past the Post's main building on Aug. 5, 2013. (Photo: Brendan Smialowski/ AFP/Getty Images)

An investigation of a federal judge’s hiring of a law clerk has rejected a narrative pushed by The Washington Post, The New Yorker magazine, and seven House Democrats that accuses the clerk of making a racist remark, asserting that the text message at issue was “fake.”

A colleague had created phony text messages from fellow employees, including the accused law clerk, the probe found.

About three hours after The Daily Signal’s phone and email inquiries about her column attacking the law clerk and a judge, The Washington Post’s Ruth Marcus, the newspaper’s deputy editorial page editor, replied in an email Tuesday that she would post another column on the matter.

The formal review of the issue last week cleared Chief Judge William Pryor, of the 11th U.S. Circuit Court of Appeals, of allegations by Marcus and the House Democrats that he hired a law clerk who wrote “I hate black people” in a text message more than four years earlier.

The law clerk, Crystal Clanton, was accused of writing the text while working for the conservative youth organization Turning Point USA, a job she reportedly left in summer 2017.

That year, in a published report, Clanton denied writing the racist text message.

The recent investigation conducted by another appeals judge found that Turning Point USA fired another employee, not Clanton, because the employee had “created fake text messages to be used against co-workers.”

Clanton, 26, who is set to graduate from the Antonin Scalia Law School at George Mason University, was hired as a law clerk by Pryor and another federal judge. Judge Corey Maze of the Northern District of Alabama hired Clanton to clerk for him this year; she is set to clerk for Pryor, the chief judge, in 2023.

In October, Marcus wrote her column questioning why Pryor hired Clanton, noting that the appeals judge had been a “feeder” for Supreme Court clerks, meaning that his former clerks frequently went on to work at the nation’s highest court.

“And this is the truly worrisome part of the Clanton story: that a sitting federal judge is credentialing someone with this kind of hateful statement in her background, and perhaps grooming her for a post that’s even more important, a Supreme Court clerkship,” Marcus wrote in the Oct. 8 column, adding:

It gives me no pleasure to focus on Clanton, who did not respond to requests for comment. I have daughters her age, one of whom happens to be in law school. We all do stupid things when we are young, and some of us do terrible things. We should allow some space for repentance and forgiveness.

But there is no evidence of repentance here, and her reported comments are astonishing in their savagery. This is not a case of a racial slur directed in anger at a single individual—not that such conduct would be in any way acceptable. This is even worse: animus expressed toward an entire race.

Marcus referenced a 2017 story by New Yorker staff writer Jane Mayer that quoted an alleged text message by Clanton that said, “I hate black people. Like f— them all … I hate blacks. End of story.”

Mayer’s story said Clanton worked at Turning Point USA for five years until summer 2017, but did not give the date of the text message.

In the story, Clanton told The New Yorker: “I have no recollection of these messages and they do not reflect what I believe or who I am and the same was true when I was a teenager.”

The New Yorker published the story years before Clanton won the clerkships for 2022 and 2023. Mayer, its author, referred The Daily Signal to a spokesperson for The New Yorker, who defended the story.

“We have the text messages and interviewed, on the record, all of the participants involved,” the spokesperson told The Daily Signal in an email, adding:

No one asserted that the texts were forged. [Turning Point USA President] Charlie Kirk said that he took ‘decisive action’ within 72 hours of learning of the racist texts, which resulted in Crystal Clanton leaving Turning Point USA. We have seen no evidence proving that our story is incorrect.

Turning Point USA did not respond to inquiries from The Daily Signal by publication time.

The vindication of Clanton and Pryor in the formal review doesn’t surprise J. Christian Adams, president of Public Interest Legal Foundation, an Indianapolis-based election integrity group where Clanton was a law clerk in 2020.

“The left uses smears about race to try to destroy people. It’s a central part of their tool kit,” Adams told The Daily Signal, then said of Clanton: “She is brilliant, showed good judgment, and has a brilliant career despite the left and The Washington Post trying to destroy her.”

This incident, Adams suggested, is comparable to sloppy media coverage of Nicholas Sandmann, a teenager from a Catholic school in Covington, Kentucky, and his encounter with a Native American activist near the Lincoln Memorial after the 2019 March for Life. Sandmann later settled a defamation suit against the Post, among other media outlets his lawyers pursued in court.

“The only question remaining after this report that totally vindicates Crystal is who will pay for the pain they have caused?” Adams said.

Marcus’ column said that she reached out to both Clanton and Pryor, but neither commented in response.

The Daily Signal sought comment Tuesday from Marcus, who replied in an email saying, “I want to try to be [as] responsive as possible” and asking for a deadline.

Marcus followed up by saying that she would post another piece on the matter later Tuesday.

In a new column published by the Post that evening, Marcus didn’t budge and labeled as “unconvincing” the judicial finding that Clanton was the victim of fake text messages.

“In short: At no point before or after publication of The New Yorker story was there any public dispute that Clanton had sent the texts at issue,” Marcus wrote in the column following The Daily Signal’s inquiry. “Neither Clanton nor her lawyer, to whom Mayer spoke at the time, suggested that there was any fabrication.”

After The Washington Post published Marcus’ Oct. 8 column, seven Democrats on the House Judiciary Committee—led by Chairman Jerry Nadler of New York and Hank Johnson of Georgia, chairman of the subcommittee on courts—asked Chief Justice John Roberts to order an investigation at the Supreme Court.

No litigant or lawyer who is part of a racial, national, or religious minority can trust that they will receive equal justice before these judges. No one bringing a case involving claims of discrimination or civil rights violations can assume that these judges’ rulings will be free from invidious bias.

Johnson was not pleased with the findings clearing Clanton and Pryor, the Georgia Democrat said in an email statement to The Daily Signal.

“The 2nd Circuit’s decision does a disservice to everyone involved,” Johnson wrote Tuesday, referring to the appeals court’s review of the matter. “If these judges did nothing wrong, then the decision makes it look like they have something to hide. And if they did violate their ethical duties, then this decision helps keep that quiet. This cannot be the end of the matter.”

In response to the House Democrats’ letter to Roberts, the Atlanta-based 11th Circuit judges referred the complaint to the New York-based 2nd Circuit for review by Chief Judge Debra Ann Livingston.

On Thursday, the 2nd Circuit’s court’s Judicial Council voted unanimously to dismiss the seven House Democrats’ complaint against Pryor and to uphold Livingston’s Dec. 22 decision in the matter, The Atlanta Journal-Constitution reported.

Livingston’s report refers to a Turning Point USA executive who said that Clanton treated everyone with “kindness, respect and fairness” and that “the media reports are not accurate.”

The report by the 2nd Circuit’s chief judge adds that the executive “had determined that the source of the allegations against [Clanton] was a group of former employees.”

“One of these employees was fired after the organization learned that this person had created fake text messages to be used against co-workers, to make it appear that those co-workers had engaged in misconduct when they had not,” Livingston’s report says.

Livingston’s report also says that Pryor and Maze were aware of the allegations and that both judges interviewed Clanton about them before hiring her as a law clerk. They believed Clanton, who insisted that the allegations were not true.

The “undisputed record,” Livingston’s report says, shows that Pryor and Maze “performed all the due diligence that a responsible judge would undertake.”

In a letter that was part of the investigation, the 11th Circuit’s Pryor wrote:

The complaint against me alleges, without any evidence, that I either failed to investigate this scurrilous accusation or that I knowingly hired someone who had engaged in racist behavior. It saddens me that any member of Congress would make such an unfounded accusation against a federal judge or smear the reputation of an innocent law student.

The Daily Signal sought comment on Livingston’s conclusions from the seven House Democrats who signed the letter asking for the Supreme Court’s Roberts to investigate.

None besides Johnson had responded by publication.

Ken McIntyre contributed to this report, which was updated within an hour of publication to include a reference to Ruth Marcus’ new column on the subject.